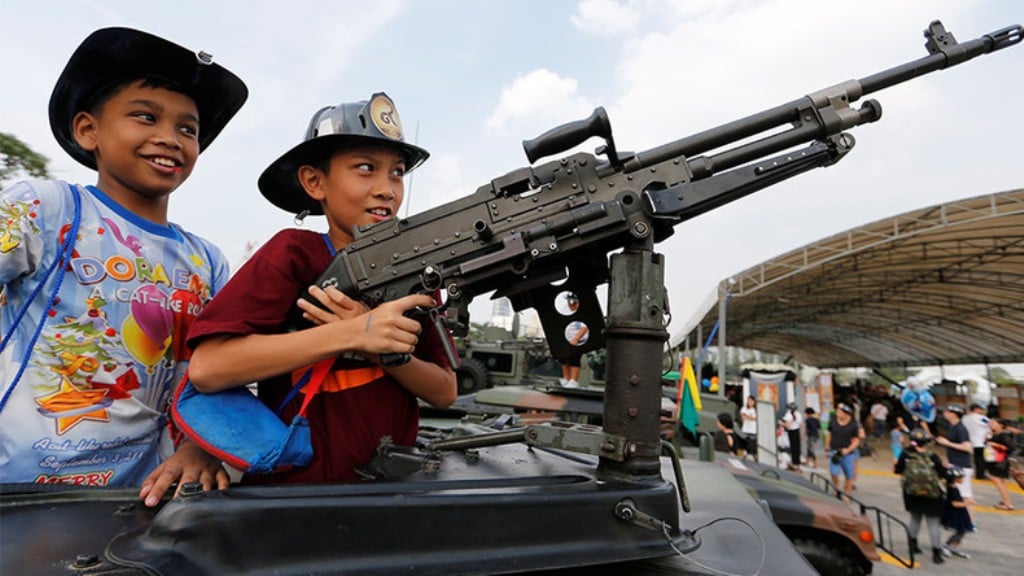 Thailand is known for its lush beaches, friendly locals and nightlife however its long struggled with a pervasive gun culture. According to research by the University of Sydney’s School of Public Health, there were approximately 10 million privately-owned firearms in the country in 2017, an estimated 4 million of which were illegal.

Thailand’s seemingly strict gun laws are relatively easy to circumvent, meaning any would-be perpetrator with a personal vendetta can easily acquire a firearm. The easily circumvented gun laws was proven on February 8-9, last year with one of the worst mass shootings in Thailand’s history.

A deadly month of shootings

In February, 30 people were killed in three separate shooting incidents.

A 17-hour shooting ordeal started on February 8 when a rogue military commando stormed Korat Shopping Centre in the province of Nakhon Ratchasima. The 32-year-old gunman, Jakraphanth Thomma, stole weapons from his military camp before making his way to the popular mall and proceeding to open fire on innocent civilians. The incident left a total of 29 people dead.

The tragedy was born from a land deal gone wrong. Jakraphanth felt as if he had been cheated out of a housing deal involving his superior officer, who he then killed before the mall attack. In a social media post that has since been taken down, Jakraphanth wrote, “Do they think they can spend the money in hell?”

Just four days after this shooting, another incident occurred in Bangkok where a gunman fired at least 40 shots near Chulalongkorn University. No injuries were reported. Another four days later, a woman was shot dead at a Bangkok shopping mall. The gunman was later found to be the woman’s ex-husband.

Incidents such as these beg the question of why an ordinary person in Thailand with a personal grudge can so easily obtain a firearm and kill dozens of civilians.

No moves to reform gun laws

Following the deadliest month of gun violence in the country’s recent history, there was no major push for tighter gun laws. However, the public directed major criticisms at the government and the incident sparked growing calls to reform Thailand’s predominantly militaristic rule. Popular hashtags of “reform the military” and “PrayuthRIP” started to crop up on Twitter, the latter referring to the perceived lack of empathy shown by Prime Minister Prayuth Chan-ocha in response to the shootings.

The February 8-9 mass shooting cast a spotlight on the military’s questionable commercial activities and the immense power it still holds over the country. While the COVID-19 pandemic temporarily muffled calls for radical change, the recent wave of pro-democratic protests illustrates the country’s ongoing struggle to reform its constitution.

On paper, Thailand has seemingly strict laws on gun control. There is a prison sentence of up to 10 years for carrying illegal firearms, comprehensive background checks are mandatory and each gun license only permits one firearm. Nevertheless, lax enforcement coupled with widespread corruption among police officers has led to a thriving underground market.

Many people circumvent the law with relative ease, even buying guns via social media. Some see platforms such as Facebook as promoting the sale of guns. A second hand .38 Smith & Wesson can be easily purchased online starting at approximately US$600 (20,000 baht).

From handguns to low-powered rifles, firearms are also frequently smuggled in through the Thai-Cambodian border and sold at half the price of a legal weapon. To add, firearm imports to Thailand have increased during the pandemic. Nevertheless, authorities are insisting that the number of gun-related deaths is declining, almost halving between 2014 and 2016,

A long road ahead

Despite the decline in deaths, Thailand still sees far more deaths than its Southeast Asian counterparts, with the exception of the Philippines. The Philippines has only about one-third of Thailand’s gun ownership rates but sees 9.20 gun-related deaths per 100,000 people compared to Thailand’s 3.71.

In Thailand, the rate of civilian gun ownership is 15.1 per 100 people—significantly higher than neighboring Myanmar at 1.6, Cambodia at 4.5 or Laos at 3.0. Many Thais cite personal protection and the ineffectiveness of law enforcement as the main drivers behind their purchase of a firearm. Gang warfare and drug-related crimes also reportedly fuel the country’s gun ownership culture.

Despite the harrowing numbers and events of February, mass shooting incidents remain an anomaly in Thailand. By numbers, Thailand is becoming safer year-on-year in terms of civilian gun violence.

But as this year has shown, gun violence continues to pose a threat. An engrained firearms culture and an unwavering belief amongst Thais that firearms are a key to personal protection will not be easily changed.

With many interwoven factors, Thailand has to fight its fervent gun culture on multiple fronts. The country may be gaining ground in this fight but for the foreseeable future, guns will remain pervasive in Thailand and the danger will continue.