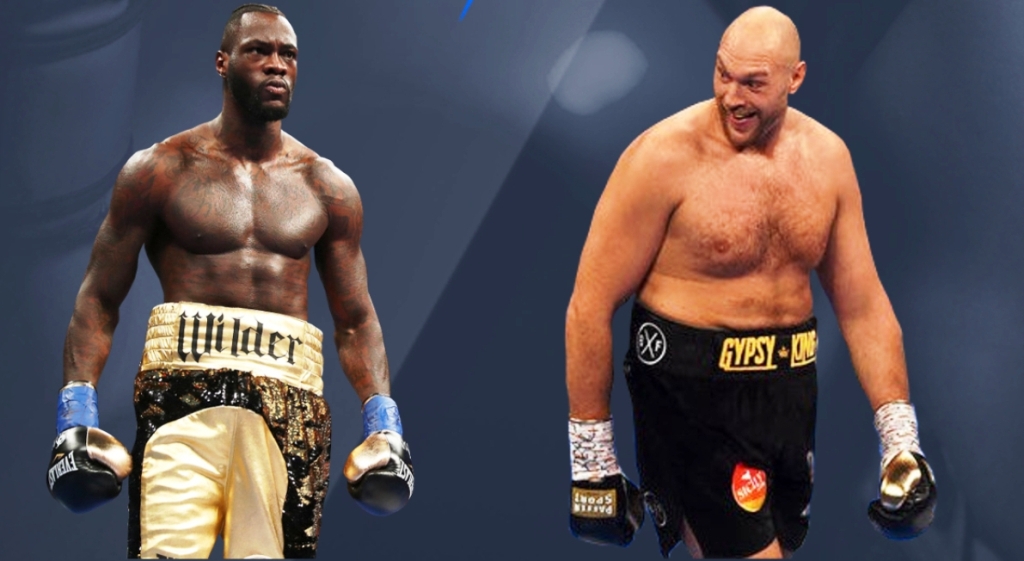 Despite that, his great rival heavyweight boxer Deontay Wilder upped the battle of wits between the two this week by proclaiming that the thought of getting back in the ring with him is stopping Fury from getting a good night’s sleep.

Wilder is no stranger to making strange our outspoken comments. The American, who holds one version of the world’s heavyweight championship, has spoken in the past of how he dreams about killing one of his opponents in the ring and will tell anyone who listens that he’s the best heavyweight in the world.

That’s to be expected of a man who hasn’t lost a single fight, and has developed a reputation for being one of the most savage knockout artists of all time. In his mind, Wilder believes he won the first meeting between the two. He, like the rest of the boxing world, was deeply unsatisfied with the draw. He’s now only a few days away from getting the chance to right that wrong.

Fury, on the other hand, is showing no signs of his usual clownish behavior or mind games. Now an older, wiser man, he seems worlds away from the cartoonish performer who appalled Vladimir Klitschko by turning up to a press conference prior to their 2015 fight dressed as Batman.

Normally by this stage, the British press is used to Fury giving them a soundbite they can use to splash all over the back pages of their newspapers. Instead, he’s been quiet. He’s allowed Wilder to do all the talking – a job that the Bronze Bomber boxer excels at – and sat back, quietly working on his own preparation. The biggest question as we approach fight night, though, is whether that preparation been good enough?

There’s no doubt that Fury looks leaner and faster now than he did when the two first met. Back then, Fury was a Cinderella story. He’d overcome suicidal thoughts, alcohol and drug abuse issues, the suspension of his boxing license and what appeared to be an enforced retirement to come back to the sport he loved, and prove that he still had something to offer at the highest level.

Still, though, he probably took the Wilder fight too early. The press was clamoring to see Fury box his compatriot Antony Joshua. Mysteriously, Joshua’s camp found it as difficult to agree on terms with Fury as they did to agree on terms with Wilder. Just as mysteriously, Fury and Wilder’s respective camps had no such difficulty agreeing on terms with each other. Joshua went into hiding with his own (recently regained) world titles. Fury and Wilder went into battle.

What happened on the night has already gone down in boxing folklore. Wilder hit Fury with the sweetest, meanest shot you’ll ever see in the eleventh round. Tyson’s eyes span around in his head almost as if they were the reels on one of the games you’d find on an online slots website.

They may as well have been online slots, because what happened next was a jackpot as far as the Gypsy King’s career is concerned. He sat up on the count of nine, almost like the WWE’s Undertaker, and rose to his feet. Wilder was visibly shaken. The odds of winning an online slots jackpot with a one-dollar bet would have been better than Fury beating that count, and yet there he was, boxing on.

Even if he’d lost that night, his reputation would have been set in stone. As it was when the bell rang, though, Fury believed that he’d won. He’d been on the mat twice, but he’d schooled Wilder in almost every round with a masterclass in technical boxing.

It’s only fitting that we should have made a reference to WWE. Fury’s love of the world of pro wrestling (or ‘sports entertainment’) is well known, and late last year, he took time out of his training schedule to work a match with WWE giant Braun Strowman in Saudi Arabia. Fury spent an extended period of time in the WWE’s Florida Performance Center, learning the basics of grappling, and practicing his match.

That’s presumably time that he didn’t spend watching tapes of Deontay Wilder, or sharpening up his boxing skills. Indeed, the last time we saw the big Brit in the boxing ring, he was almost stopped by Otto Walin by a dreadful cut above his right eye. It was the sort of cut that weakens the skin, even if it’s attended to by the best and most qualified doctor in the world. For Wilder, the scar will become a target.

Only Tyson Fury knows if he’s trained hard enough for this opportunity to end the debate between himself and Wilder once and for all. Only Tyson Fury knows whether or not he’s learned enough from his last meeting with Wilder to identify the changes he needs to make to get his hands raised at the end of this contest. In among all the uncertainty, though, there’s one thing we’re reasonably confident that we can say for sure.

Tyson Fury is not being kept awake at night because he’s having nightmares about Deontay Wilder. After all he’s seen in his life, and all the many challenges he’s already overcome, Deontay Wilder will count as just another day in the office for Fury, even if he loses.

The fight of the decade

On February 22nd, 2020, two undefeated boxing titans will walk into the MGM Grand Arena in Paradise, Nevada, USA. When the night is over, one of them will walk out without the zero on the record. The other will walk out with the heavyweight championship in the world, and a direct route to facing Anthony Joshua – if ‘AJ’ can be persuaded to take the fight. It might be the fight of the year.

Even more it might be the fight of the decade. It could even be another frustrating draw and a total disappointment. That’s the nature of boxing! There’s only one way to find out how it’s going to go, though, and that’s to watch it. We’ll certainly be doing that, and we hope you will, too.