Against the San Antonio Spurs, the Philadelphia 76ers closed out a busy four-game schedule last week. In the week leading up to Sunday’s game, the Sixers were 1-2. With a road victory over San Antonio, the Sixers finished the week 2-2 after playing a rematch against the Spurs.

It was back to the court for the 76ers on Tuesday after a day off on Monday. New Orleans Pelicans played the Sixers for the second time in a row. Last month, the two teams were supposed to match up for a second and final time, however, a large number of absences prevented the Sixers from meeting the eight-man minimum. That game has been postponed until further notice.

On Tuesday, the make-up game between New Orleans and Philadelphia took place. This time around, it was the Pelicans who had a lot of injuries heading into the matchup. Because there were so many valuable players missing from New Orleans’ lineup on Tuesday, the Sixers were heavily favored.

New Orleans, however, would not back down. Sixers were actually outscored by four points by the Pelicans during the first quarter. The Clippers went on to outscore the Sixers in the second quarter. After halftime, the Sixers trailed by eight points.

It wasn’t long before Joel Embiid and the Sixers woke up after the Pelicans stunned many with their first half against the Sixers. Five different leads were recorded in the third quarter. The lead changed twice in the fourth quarter.

The Pelicans managed to match the Sixers’ second-half scoring total, but they were outscored by 18 points. After the Sixers rallied late in the game, they defeated New Orleans 117-107 and won their 28th game of the season.

Player Observations on 76ers vs. Pelicans

A sprained shoulder had forced Thybulle to miss the last five games. The Sixers have now included him in their starting lineup. Thybulle was given the nod to start since Danny Green was unavailable. During that time, he played 33 minutes. A mere one of Thybulle’s five shots was drained on offense. Thybulle went 0-3 from deep. Despite his offensive struggles, Thybulle picked up four rebounds, two steals, and a blocked shot on defense.

In recent weeks, Harris has been one of Philadelphia’s most reliable players in spite of an upper-body injury. Despite his injury, Harris played one of his best games this season on Tuesday. In a little under 40 minutes of action, he was extremely effective from the field as he knocked down 13 out of 19 shots that he attempted. A double-double of 33 points and 14 rebounds allowed him to make it a double-double. 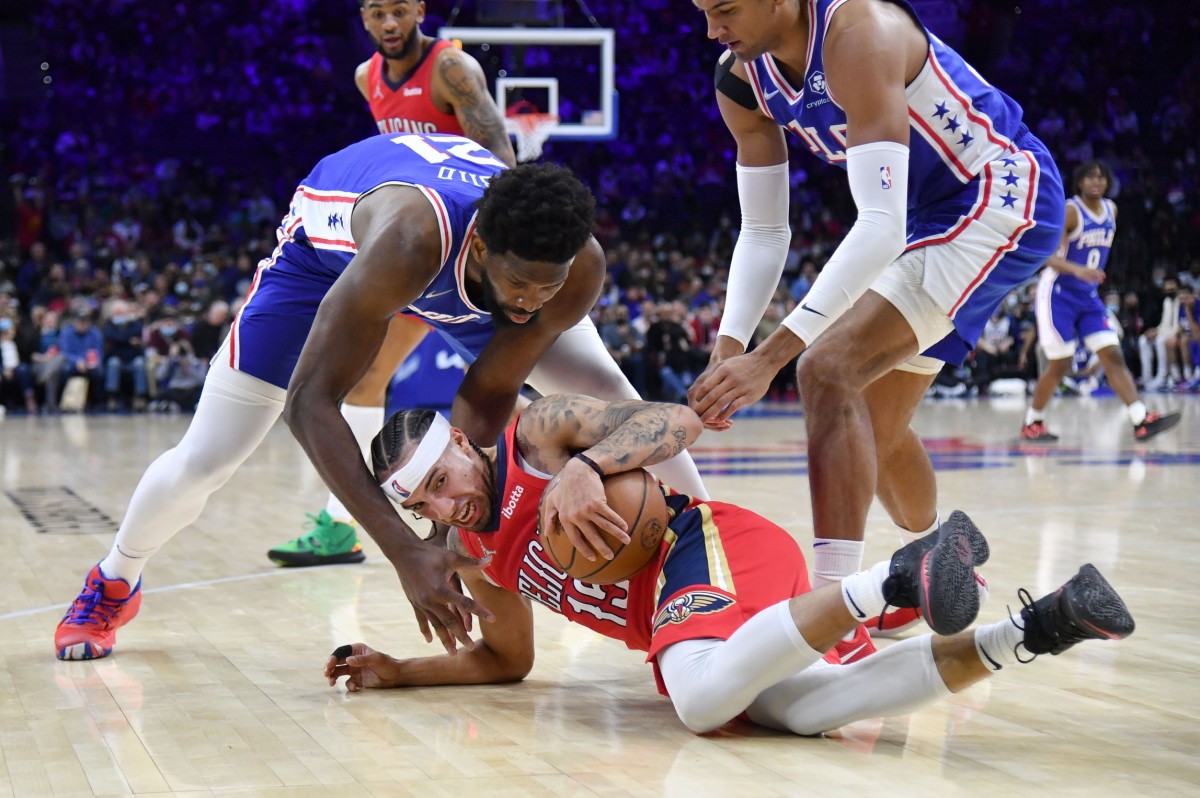 This was another fantastic game for Embiid to add to his list of MVP contenders. He just managed to collect 42 points in a short amount of time. Furthermore, he had 14 rebounds, four assists and four phenomenal blocks on the defensive end as well. According to tradition, the Sixers would not win Tuesday’s game without Embiid performing like a supernova.