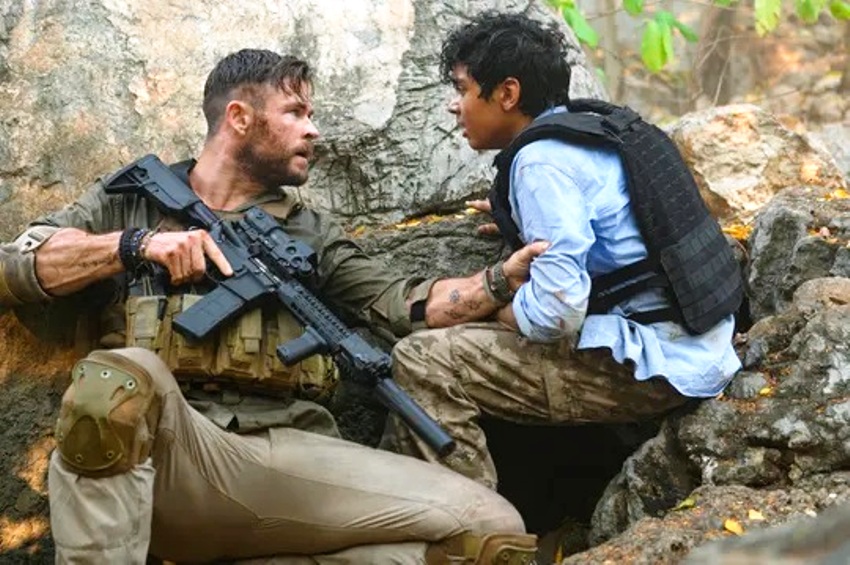 There are at least half a dozen extended action sequences in the new thriller Extraction that are impressive in their scope and relentless in their intensity. They all directly involve Chris Hemsworth, the Aussie Avengers star. Hemsworth plays a rugged mercenary attempting to rescue the kidnapped son of an Indian drug lord.

Encountering countless criminals and corrupt cops attack from every angle. It’s one of those movies that has you catching your breath by the end of it. And for Hemsworth the struggle was real.

“So exhausting,” the actor, 36, tells Yahoo Entertainment via Zoom while breaking down director Sam Hargrave’s continuous, carefully choreographed shots. “You’re not acting exhausted. You’re struggling to breathe and throw that last punch by the end of each take.”

The Netflix action thriller easily marks Hemsworth’s highest body count. Also with his increasingly bruised and battered Tyler Rake dispatching of foes via gun shots and some, um, more creative methods at almost a John Wickian rate. And it makes sense given who was behind the camera.

First-time filmmaker Hargrave, who joined Hemsworth on the Zoom call, followed in the path of his mentors and John Wick directors Chad Stahelski and David Leitch. Cutting his teeth as a stunt coordinator on dozens of action films, including several with Hemsworth’s Thor in the Marvel Cinematic Universe.

Hemsworth was routinely stalked by fans while filming

Extraction, based on the comic Cuidad, has quite the MCU connection; it was produced by Infinity War and Endgame co-directors Anthony and Joe Russo; the latter of whom also co-wrote the screenplay.

A hardened mercenary’s mission becomes a soul-searching race to survive when he’s sent into Bangladesh to rescue a drug lord’s kidnapped son. The action wasn’t just limited to set, though.

While filming in India and Bangladesh, Hemsworth was routinely stalked by fans. Many who would chase after his escort on mopeds, bikes and tuk-tuks.

Earlier this week, Hemsworth posted a video to Twitter showing a small group of men speeding alongside his car in treacherous fashion while attempting to secure his autograph.

“They’d just chase us to set, basically, and [at] every traffic light or every time we’d slow down they’d be banging on the window trying to hand cards in,” the actor says. “I’ve never seen that kind of enthusiasm. It was impressive and scary at times.”

Hemsworth acknowledged the man prominently featured in the video was the most extreme autograph seeker he’s encountered. And the actor did eventually pull over to sign and snap selfies with him. “It was so scary. I swear a couple times, I was like, “He’s gonna die.’”

TikTok Introduces its First trial of Live-Streaming in Thailand