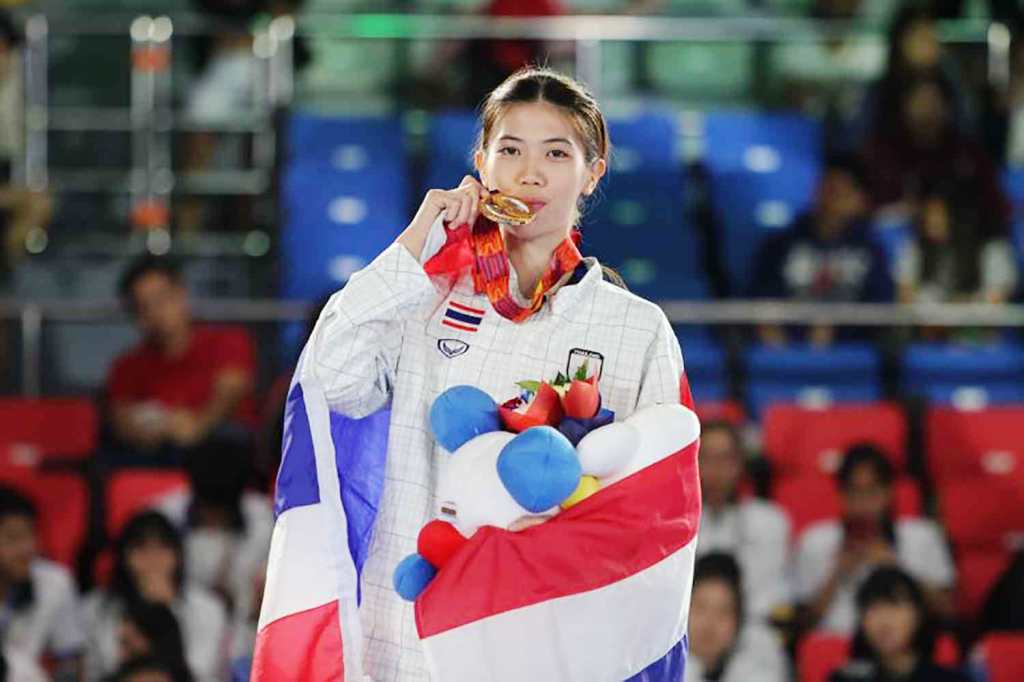 Thailand’s taekwondo flyweight queen 23 year-old Panipak Wongpattanakit has won her first gold metal on Saturday at the Olympics Games in Tokyo to add to her two world championships.

In the final bout, Spanish 17-year-old Adriana Cerezo Iglesias was seven seconds away from taekwondo gold when a 2-point body kick from Panipak reversed a 1-point lead, sending her crumpling on the mat in tears.

“I have a lot of mixed feelings right now,” Cerezo Iglesias, who has never won a world championship, said.

“I was in the final and could fight, I was really in the game at my first Olympics. But the gold is what I came for and what hurts is the way I lost it.

“I gave her a chance to win and she’s really good, she took it. She deserves it,” she said of the Rio bronze medalist.

The Spaniard had beaten the odds with a 33-2 win in the quarter-finals over China’s two-time Olympic Games champion Wu Jingyu – twice her age at 34 – whose dream of a historic third gold medal was shattered with the defeat.

Wu had also lost in the quarter-final in Rio, triggering her decision to retire. She had then returned in 2019 and had endured a gruelling tournament schedule to rack up enough points to qualify for Tokyo 2020.

“This is my last Olympic Games and that’s really hard for me,” Wu said. “I have already retired once and now I am retiring again.”

With form hard to judge coming into the Games after most international competitions were wiped out due to the COVID-19 pandemic, another teenager – in the men’s – 58kg category – also came out of nowhere to reach the final and win silver.

Tunisian 19-year-old Mohamed Khalil Jendoubi looked set to be minted as the next “one-to-watch” as he reached the final, where he ultimately met his match in Italy’s Vito Dell’aquila, who took the gold.

Jendoubi breezed to a surprise victory over Solomon Demse in the quarter-finals with a 23-point gap, then went on to beat top-ranked gold medal favourite Jang Jun of South Korea, who took one of the two bronze medals.