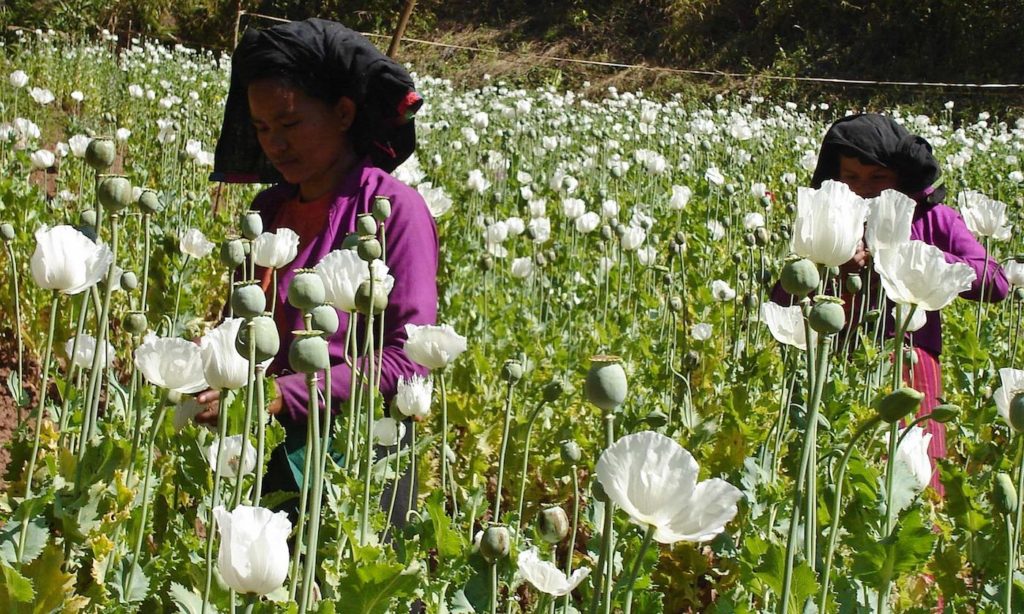 Opium poppy cultivation in Myanmar declined a further 11% in 2019 to 33,100 hectares, according to the Myanmar Opium Survey released today by the United Nations Office on Drugs and Crime (UNODC).

Jeremy Douglas, UNODC Regional Representative, noted, “the drop in cultivation was again significant last year. We will continue to work with Myanmar and communities in Shan to assist the transition from opium to sustainable economic alternatives. We are also discussing options to help Kachin given the situation and needs there.”

The report also highlights opium price data, finding that average farm-gate values of fresh and dry opium decreased by 4% and 7% between 2018 and 2019. Over the last four years farm-gate prices dropped a staggering 63% and 51%.

The decline in values combined with the reduction in supply again suggests that demand for heroin in the region is dropping. Also that the drug market continues to shift strongly to synthetic drugs. At the same time, lower farm-gate prices make opium cultivation less attractive and viable, contributing to declining cultivation.

Although demand for heroin continues to drop, organized crime groups still generate substantial revenues from the drug in Myanmar. Domestic heroin consumption of 6 tons is valued at up to US$290 million. And the export of heroin generates approximately US$1 billion locally.

At the same time, opium cultivation and heroin production in Myanmar continue to pose a significant public health and security challenge for Southeast Asia and neighbouring East Asia and Australia. An estimated 3 million heroin users remain in the region, with the retail market generating approximately US$ 10 billion annually.

The report also reconfirms the link between conflict and opium, with the highest levels of cultivation continuing to take place in unstable and conflict prone areas of Shan and Kachin.

Opium cultivation, heroin production and trafficking, and the evolving illicit drug economy, are affecting peace and stability in the country and surrounding border areas.

Regional Representative Douglas commented, “major international organized crime groups are using conflict areas in the north to source heroin and produce and traffic synthetic drugs. They have the access to territory and relationships they need to do business.” He added, “the situation here is having a profound impact on the broader Asia Pacific region – it is in everyone’s interests to address the illicit drug economy in Myanmar and the Mekong.”

The influence of opium poppy cultivation is being mitigated in some areas through alternative development programmes that provide viable sources of legitimate income.

Minister of Home Affairs Lieutenant General Kyaw Swe remarked, “the Government is pleased to see further declines, but we need to provide more support to opium producing areas if we are going to continue to make progress and ensure sustainability.

We will also expand collaboration with Mekong MOU countries and UNODC to address organized crime and the production and cross-border trafficking of drugs and precursor chemicals.”

Other UNODC programmes are helping address different aspects of the drug challenge, including by increasing regional cooperation to address organized crime and trafficking, control precursor chemicals, improve border management, and to provide access to health and social services.

Related Topics:MyanmarOpium productionUnited Nations Office on Drugs and Crime
Up Next

Cruise Ship With 3500 Passengers and Crew Quarantined in Japan