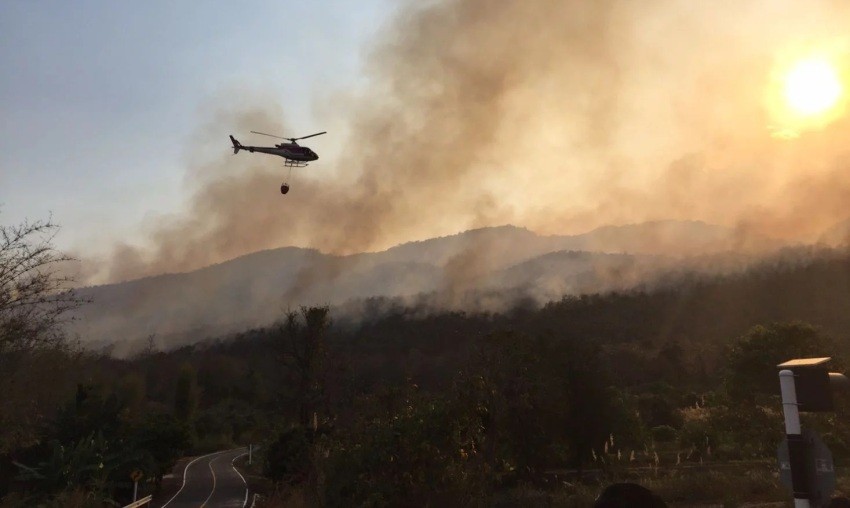 The level of PM2.5 rose to 592 at Chiang Mai University’s Mae Hia Campus in Muang district.

The CMC-CCDC network gathers air-quality data from air-monitoring kits set up at community level across the North. This system provides real-time air-pollution measures as it is close to the pollution source. While the air-monitoring system run by the Pollution Control Department (PCD) provides a general average over 24 hours.

Thailand’s safe threshold for PM2.5 stands at 50 ug/m3, while the World Health Organization’s is set it at 25 ug/m3.

The deputy governor of Chiang Mai province, said that though forest fires have been a chronic problem for more than a decade, this year’s situation was dire. Because fires had erupted in areas that are not accessible by firefighters and volunteers.

A fire erupted yesterday in Doi Suthep-Pui National Park in Hang Dong district. The fires had to be doused by helicopters, the deputy governor said.

Meanwhile, The Bangkok Post reports that 218 hot-spots in 18 districts in Chiang Mai.

Poor Air quality due to forest fires caused by arson

Pralong Dumrongthai, director-general of the PCD, said that as forest fire hot-spots in the North continue rising due to arson; open burning; and pollution from bush fires set in neighbour countries.

Mr Pralong blamed the pollution on the lack of humidity and poor ventilation. Also adding the major culprits were still arsonists and open burning.

Chiang Rai province is also suffering air pollution problems due to prevailing wind blowing smog across the province. In Chiang Rai’s Mae Sai district the air quality index was at 268 while in Chiang Rai town centre, the reading was around 249. The worst air quality was resisted in Myanmar’s Tachileik at 344.