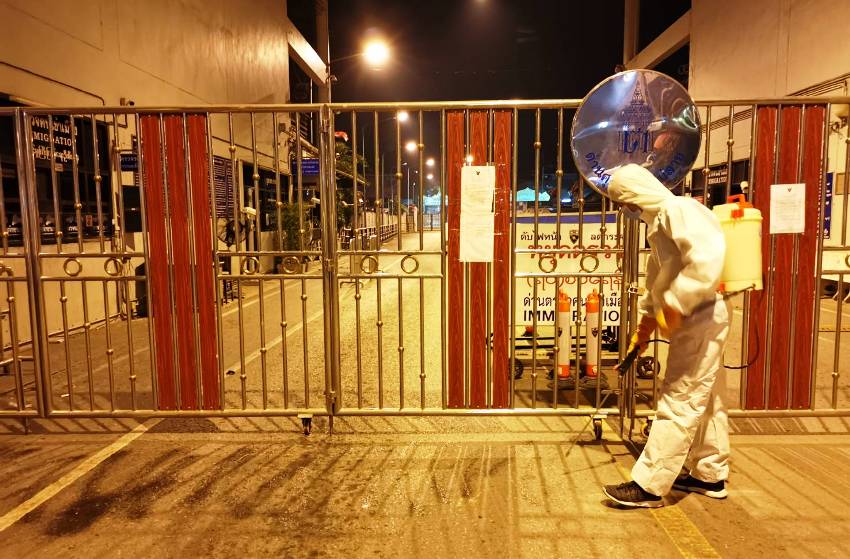 Thailand has banned the entry of foreigners under a State of Emergency Decree which goes into effect March 26th, 2020. The ban and possible 24 hour curfew have been enacted as Thailand tries to tackle the spread of Covid-19.

Prime Minister Prayut Chan-o-cha announced on Wednesday the country would be under a state of emergency as of Thursday until April 30. Above all as Thailand reaches a turning point in its battle with Covid-19 transmissions.

The armed forces will set up checkpoints across the country under the Emergency Decree. Also 16 first-level instructions have been issued following the prime minister’s national address. A curfew is not imposed at this level.

However, Deputy Prime Minister Wissanu Krea-ngam, who oversees security affairs, said a curfew may be imposed later if deemed necessary.

“If a curfew is imposed, it will be without warning. Above all to prevent panic and hoarding of food,” he said. He added that if the government does go ahead with imposing a curfew to curb the spread of Covid-19, the order will be different from previous curfews which were only imposed at night to maintain peace and order.

“The curfew for Covid-19 is likely to cover 24 hours. With exceptions for individuals seeking medical treatment, those going to court or those working in broadcasting services.”

Among first-level directives imposed under the Emergency Decree, foreigners are banned from entering the kingdom. With the exception of diplomats, shippers, drivers, pilots and others permitted by the prime minister.

Thai nationals stranded in other countries will still be allowed to return provided they have health certificates.

Meanwhile, has been urged to refrain from travelling. Inter-provincial travellers are required to install an app for tracking. They will also have to undergo screening at mandatory checkpoints.

Children under five and adults above the age of 70 and those with underlying health problems are strongly recommended to stay home. All public gatherings in Thailand are now banned.

Gen Prayut also threatened to take swift and drastic action against those who take advantage of others.

“I want to warn those bent on taking advantage of people’s plight and death. Don’t think they will get away. I will do everything possible to deal with them swiftly and expeditiously. They will be spared no mercy,” he said.

Gen Prayut said that as the situation may also worsen. Consequently more stringent measures will be necessary to stem the spread of the Covid-19 virus. Above all to cushion its impact on people and their livelihoods. He also appealed to the public to comply with these measures despite the inconvenience.

“From now the measures to be imposed will be more intense and will affect people’s lives. I’m asking you to comply and be responsible. Some people may feel their rights are being infringed upon, but all this is being done to protect lives. If we take things seriously, we can get through this,” he said.

According to the PM, the Covid-19 Administration Centre is upgraded as a special agency under the State of Emergency decree’s Section 7. To integrate all efforts to combat the virus. He said he will personally be in charge of tackling the virus and he will report directly to the people.

Gen, Prayut said the permanent secretaries of Public Health; Interior; Commerce and Foreign Affairs are there to help him; while the armed forces chief will oversee security.

In a move to control fake news that may cause panic, the PM has called on media outlets to check the facts with a special communications team. Furthermore a team of doctors will hold a press briefing daily.

National police chief Pol Gen Chakthip Chaijinda told the Bangkok Post on Wednesday that a 24-hour curfew is a possibility. However the situation so far does not warrant it.