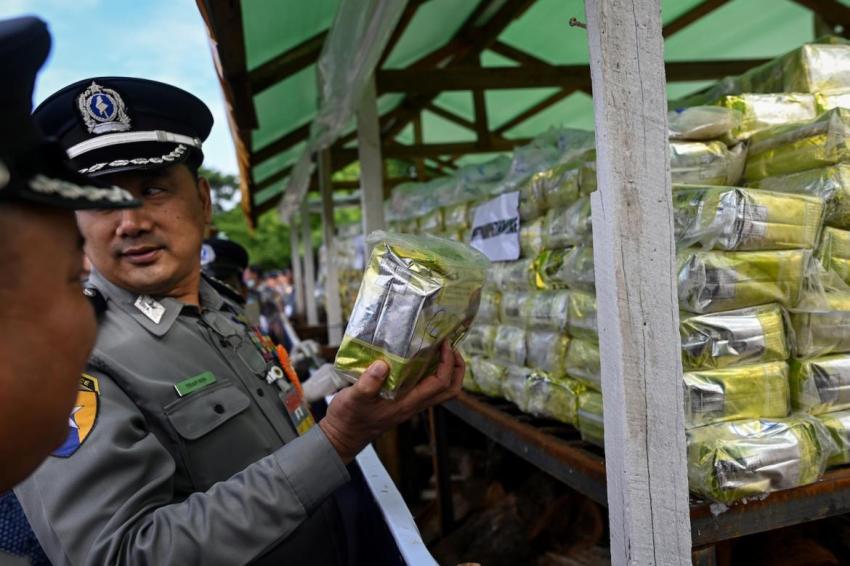 The seizures were in part from one of the largest counter-narcotics operations in the history of Myanmar and region.

The drug operations were carried out with the support of the Myanmar military between the 20th of February and the 9th of April.  They were conducted in and around Lwe Kham village of Kutkhai Township in the Shan State.

The operation started with a modest seizure of methamphetamine yaba tablets which subsequently led to the discovery of: 193.55 million tablets (equivalent to 17.4 tons of methamphetamine), over 500 kg of crystal methamphetamine and 630 kg of ephedrine; 3,748.5 liters of methyl fentanyl; 292 kg of heroin, 588 kg of opium and 49 kg of morphine; 6.8 kg of ketamine; and various precursor and pre-precursor chemicals totaling 35.5 tons and 163 thousand liters. “We are pleased to report the results of the operation with United Nations Office on Drugs and Crime (UNODC). Furthermore to make it clear to traffickers that their days of operating in Myanmar are numbered” Colonel Zaw Lin, Head of Law Enforcement of the Myanmar CCDAC said.

“We are meeting our commitments to our Mekong MOU and international partners. Even more we are responding to the growing challenge of synthetic drugs facing Myanmar and the region. We hope our neighbours will take note and work with us, and do the same.”

Evidence of militia involvement was also uncovered during the operation which resulted in the arrest of 33 Myanmar and foreign nationals. “What has been unearthed through this operation is truly off-the-charts.

Its also clear that a network of production facilities like those found would not be possible without the involvement and financial backing of serious transnational organized criminal groups”, remarked Jeremy Douglas, UNODC Regional Representative for Southeast Asia and the Pacific.

“We can today confirm that drug production and trafficking in and through Shan is not what some have been thinking; it is more than meth tablets and crystal meth. It has evolved to synthetic opioids on a scale nobody anticipated.”

The record-breaking series of seizures and arrests come at a time when East and Southeast Asia are beginning to witness the emergence of dangerous synthetic opioids in the regional drug market. “We have been projecting this scenario for a few years. We are now able to say it is happening,” explained Douglas. “Big international syndicates already active in the Golden Triangle are well positioned to take advantage of regional heroin demand and produce synthetic opioids alongside other drugs. We have witnessed a displacement scenario play-out with the supply of methamphetamine over the past few years. Furthermore Southeast Asia is clearly not prepared for something similar with fentanyl.”

Aside from illicit drugs, Myanmar Police have seized sophisticated laboratory and production equipment and 39 different chemicals. All of which were largely trafficked across the border between China and Myanmar. As well as from India, Thailand and Viet Nam through Laos.

The expansion and diversification of the regional drug market is occurring alongside several years of decreases in opium poppy cultivation. Suggesting that the Golden Triangle and Southeast Asia are poised to become a significant source of synthetic drugs for other parts of the world.

“We are well aware of the challenges we face,” commented Colonel Zaw Lin. “Criminal groups, traffickers and corrupt officials must and will be brought to justice. Myanmar remains committed to working together with UNODC and neighbouring countries. Above all as a part of our Mekong MOU and ASEAN regional plans to counter organized crime.”