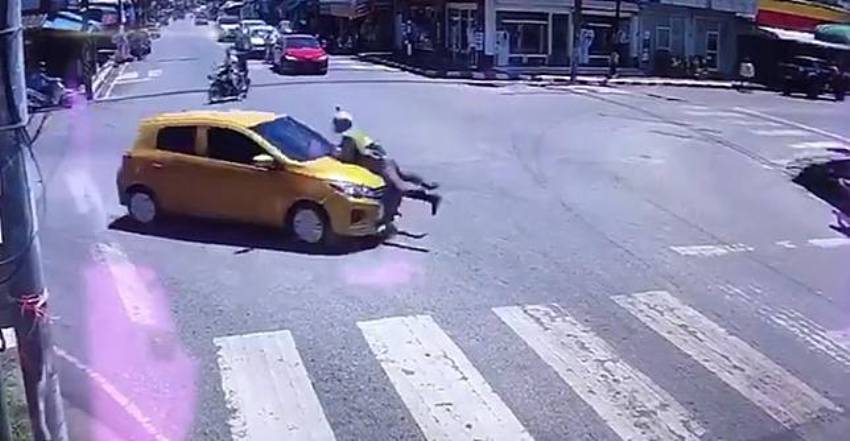 A Thai traffic policeman has survived a 2km ride clinging to the hood of a Mitsubishi Mirage that tried to run him down Wednesday. The driver of the Mitsubishi was caught on CCTV hitting the policeman in Nakhon Si Thammarat.

Pol Snr Sgt Maj Montri Nitichai of Tha Sala police station said that he was on his motorcycle, waiting at an intersection, when a yellow Mitsubishi Mirage hit the rear of his bike.

The impact was not hard and he got off the bike to talk to the driver. At which point, the driver accelerated towards him, leading him to jump onto the hood of the car. The car then drove for about 2 kilometres with the policeman hanging on to the hood.

Pol Capt Narongchai Khongchuay, whoquestioned the policeman, said the policeman couldn’t see the face of the car driver clearly. The driver of the Mitsubishi was wearing a baseball cap hiding his face . The policeman nor bystanders aw the car’s license plate either.

Pol Capt Narongchai said they would try to identify the wrongdoer with surveillance camera footage.

CCTV Footage of Mitsubishi Mirage driving with Policeman on Hood