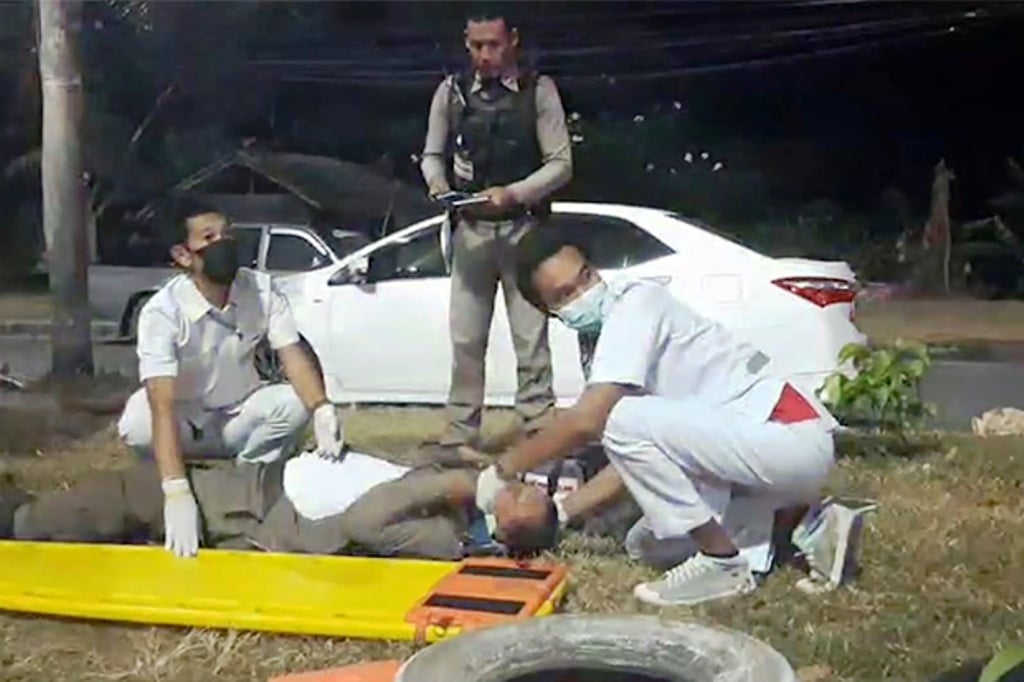 Police have reported a Toyota Fortuner crashed into a security checkpoint in Southern Thailand on Monday morning, injuring two policemen and a soldier.

The accident occurred about 5.10am at a makeshift security checkpoint in Hat Yai in front of the Tesco Lotus department store, Pol Lt Col Konkiat Nuiniam, a Hat Yai police duty officer, said.

Witnesses said a Toyota Fortuner travelling at high speed careened off the highway and ran into the checkpoint, where the two police officers and the soldier were sitting.

The checkpoint tent and those inside it were dragged about 10 metres along the ground. The Toyota came to a halt on the road median strip. A police motorcycle parked near the tent was also damaged.

The Toyota Fortuner driver, Kornmit Somboonsap, 22, was injured in the left leg. He was taken to Hat Yai Hospital.

He would also be blood-tested for alcohol, to establish whether he was driving under the influence, Hat Yai police said.

The failed shooting attack happened on a road in front of a mosque in Pattani, said Pol Col Jilawat Duding, chief of Thung Yang Daeng police in Pattani said.

Police and soldiers rushing to the scene found a white sedan in a roadside ditch. The front of the sedan was damaged and a motorcycle stuck underneath the front of the car. The injured driver had already been sent to a hospital.

According to a police investigation, Mr Mamukata Waehama, 38, rammed his car into the motorcycle of the two assailants who allegedly fired shots at him. The force of the crash caused the bike to get stuck under the vehicle before it fell into the roadside ditch.

The armed men then allegedly stole a motorcycle of a local resident parked near the scene and fled. Pattani Police also believed the assailants might have sustained injuries. They were investigating.

Mr Makhosee Sulong, the owner of the stolen bike, also filed a complaint with police.