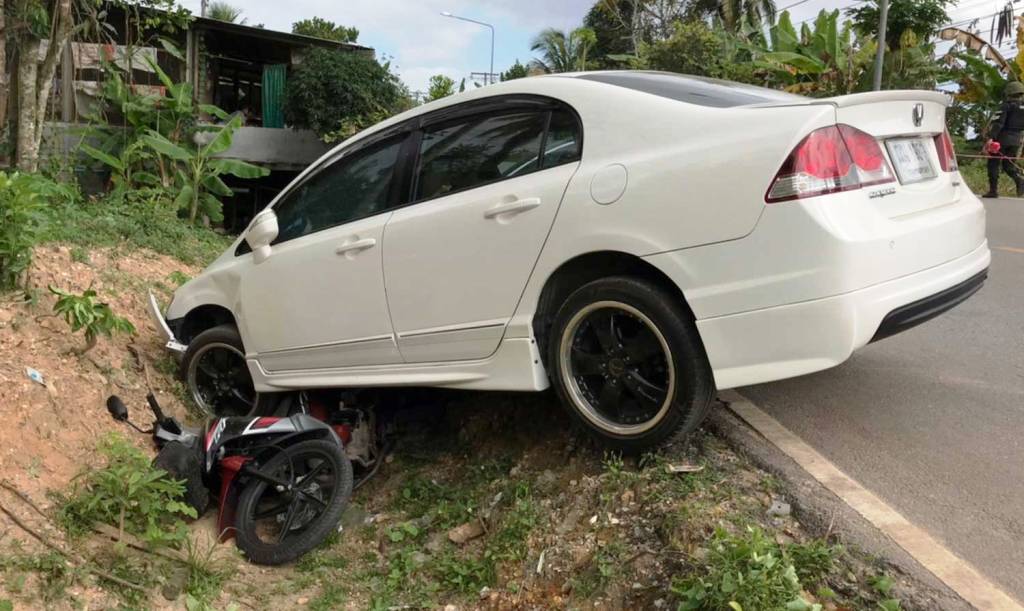 The failed shooting attack happened on a road in front of a mosque in Pattani, said Pol Col Jilawat Duding, chief of Thung Yang Daeng police in Pattani said.

Police and soldiers rushing to the scene found a white sedan in a roadside ditch. The front of the sedan was damaged and a motorcycle stuck underneath the front of the car. The injured driver had already been sent to a hospital.

According to a police investigation, Mr Mamukata Waehama, 38, rammed his car into the motorcycle of the two assailants who allegedly fired shots at him. The force of the crash caused the bike to get stuck under the vehicle before it fell into the roadside ditch.

The armed men then allegedly stole a motorcycle of a local resident parked near the scene and fled. Pattani Police also believed the assailants might have sustained injuries. They were investigating.

Mr Makhosee Sulong, the owner of the stolen bike, also filed a complaint with police.

Meanwhile, The Thai government held online talks with representatives of the main insurgent group in the Deep South. An encounter facilitated by Malaysia that appeared to be the first high-level discussion in nearly a year in efforts to bring peace to the border region.

Abdul Rahim Noor, the Malaysian broker of talks between the Thai government and the rebels known as Barisan Revolusi Nasional (National Liberation Front, or BRN), confirmed that the online meeting took place and he had facilitated it.

“Yes, it is true. The Thai side could not come to Kuala Lumpur because of COVID-19,” he told BenarNews when contacted for information about the meeting.

“The BRN team for peace talks came to KL, but the Thai team was in Bangkok. [The meeting] was conducted via online without any problem,” Rahim Noor said via text messages.

In Bangkok, Thai government officials issued a statement announcing technical-level talks – meaning that the full delegations that take part in formal peace talks were not on hand.

“Thailand’s technical-level peace talk team had a teleconference with the representatives of the BRN with Tan Sri Abdul Rahim bin Mohammad Noor being a facilitator,” said the Secretariat Office for the Peace-Talk Dialogue Panel, which is under the National Security Council.

“The essences of the meeting were [about] designing an approach on how to handle peace talks during the COVID-19 time and on the topics for the next talks, such as violence reduction and promotion of participation in solving Deep South issues.”