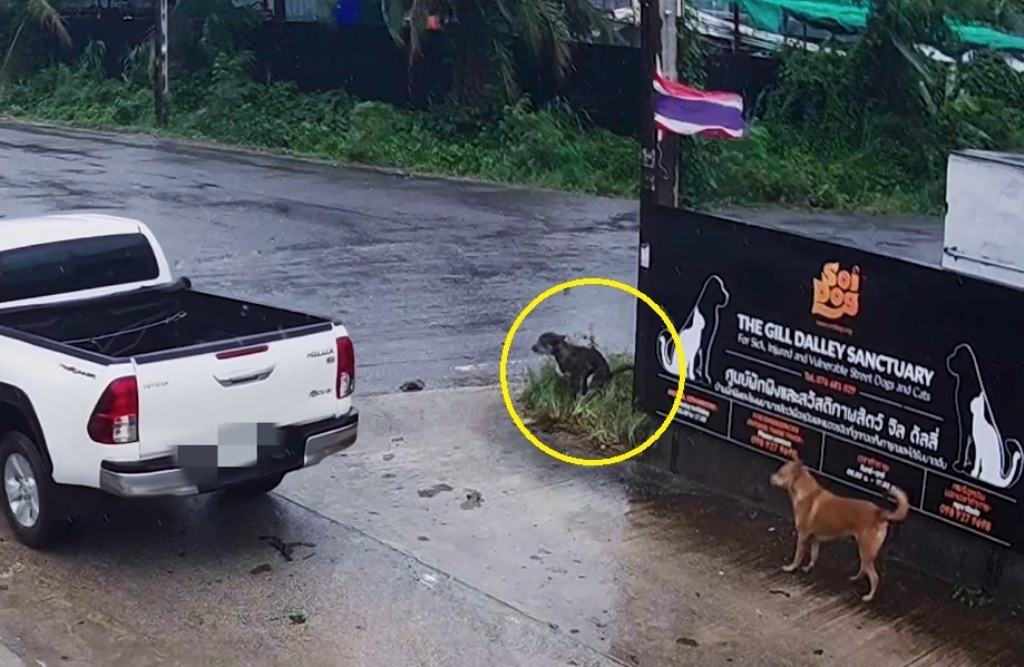 An Irishman has been charged with animal cruelty after abandoning his dog during a heavy storm on the road outside Soi Dog Foundation shelter in Phuket.  After dumping his dog and driving off he was unaware that his actions were captured on CCTV.

Furthermore a member of Soi Dog Foundations’ staff saw what had happened and rescued the dog. The dog was running down the road trying to catch up his with the owner. The Soi Dog Foundation member said the dog was also in danger of being hit by traffic.

As well as being a cruel and despicable act, abandoning a dog is also illegal in Thailand. Phuket police tracked down the Irishman who has lived in Phuket for a number of years and filed charges against him under The Cruelty Prevention and Welfare of Animal Act.

Pleading guilty, the Irishman was fined Bt2,000 and his information and fingerprints were recorded into the criminal record system. From now, if he comes to Thailand and requests for a criminal background check, this record will be shown.

The Phuket police confirmed that Irishman had paid a fine and received a criminal record. He also added that one of the main stray dog problems in Thailand is because lack of pet owner responsibilities.

The Soi Dog Foundation hopes that this story serves as an obvious example of legal action that will be taken against the abandoning of pet dogs and cats.” Phuket police also urged the public to report any cases of pet animal abandonment to the police. “Animal Cruelty Acts might be a new thing for Thais compared with other laws.

Were glad that this story will be published, this is not just the duty of the police or of Soi Dog, everyone can step in. Because without society change, law change is useless”.

Asked to comment on the case, John Dalley MBE, President of Soi Dog Foundation International, remarked that although the Irishmen had written to him 2 weeks after the event, describing it as a moment of madness, it was noticeable that he never once asked if the dog had been found or if it was safe in the care of Soi Dog. “The CCTV footage clearly shows it as a premeditated act. Had it been a moment of madness then surely he would want to know that the dog was unharmed”.

Regarding the penalty, Mr. Dalley remarked that although he felt the fine imposed was derisory, when one considers it costs on average Bt2,700 per month to keep a dog at the shelter. It was very pleasing that the authorities had acted.

“If people have a genuine reason that they are unable to keep a pet, then we will always try to help. Dumping a dog in a strange environment in heavy rain, driving away and putting its life in danger are not the actions of a concerned owner”, Mr. Dalley added.