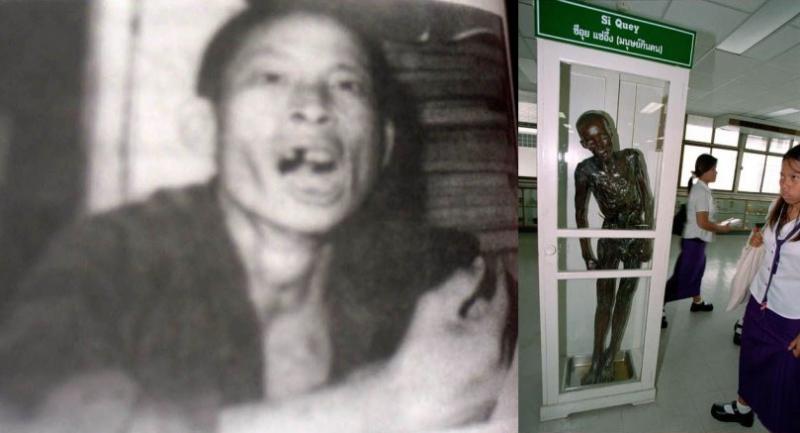 The mummified remains of Si Quey who was convicted of killing seven children and accused of eating them, will finally be cremated in Thailand, More than six decades after he died from the bullets of a firing squad.

The Corrections Department on Monday announced the cremation ceremony for Si Quey will be at Wat Bang Praek Tai in Muang district of Nonthaburi at 10am on Thursday.

Department director-general Naras Savestanan said Bang Kwang Prison will sponsor the rite. No-one had ever contacted the department with proof of a relationship with the killer. He was eventually declared a stateless person.

Si Quey was alleged to be Thailand’s most notorious serial killer.

He was convicted of murdering seven children and also accused of removing their internal organs and boiling and eating them. He was arrested in Rayong in 1958 and confessed to the murders, but denied the cannibalism charges.

Si Quey was executed by firing squad at Bang Kwang on Sept 16, 1959. He was just 32 years old. Siriraj Hospital took the body for medical study the same month.

His preserved cadaver was on display at the hospital’s Medical Museum for medical students and the public to view.

It was removed from the museum last year after a complaint by residents of Thap Sakae district of Prachuap Khiri Khan to the National Human Rights Commission that his dignity had not been protected as the exhibit branded him a cannibal.

The issue over the violation of Si Quey’s dignity became a hot online topic after Twitter user @ChangeSiam kicked off a debate. Whether Siriraj Medical Museum should stop displaying the corpse along with a label stating that he was a cannibal.

Many netizens echoed in agreement, with over 10,000 putting their names down on an online petition at change.org. They called on Siriraj to arrange a proper cremation for Si Quey. Granting him some respect after more than 60 years of public humiliation.

They also called on the wider public to stop reproducing unverified rumors about his cannibalistic tendency. Furthermore to seek the truth behind his case so that the infamous suspected serial kill can at last have justice.

Most Thais are familiar with Si Quey and the story. He allegedly lured young children out of their homes to kill them and consume their internal organs. This story is perhaps one of Thailand’s most popular urban myths.

In reality, Si Quey was a Chinese migrant who moved to Thailand shortly after the end of World War II. Though he was blamed for the murder of seven children between 1954 and 1958. The murders happened in Prachuap Khiri Khan; Nakhon Pathom; Bangkok and Rayong; he was only found guilty of one murder in Rayong.

Body Mummified and displayed as cannibal

He was sentenced to death by firing squad in September 1959, and after he was killed. The Siriraj Medical School asked to use his body for autopsy study. Later, the body was embalmed and put on display with the label “cannibal” at Siriraj Medical Museum.

Cross Cultural Foundation president Surapong Kongchantuk said he agrees with granting Si Quey some human dignity, adding that the museum had no right to display somebody’s body without permission.

“In principle, Siriraj has to return Si Quey’s body to members of his family or his guardian so they can arrange a proper funeral for him. They have no right to keep the body, not to mention publicly branding him a serial killer or a cannibal,” Surapong said.

“It is not too late for Siriraj to do the right thing by looking for his surviving relatives and returning the body to them. In case no family members can be found, Siriraj should give Si Quey a proper send off based on his religious beliefs.”