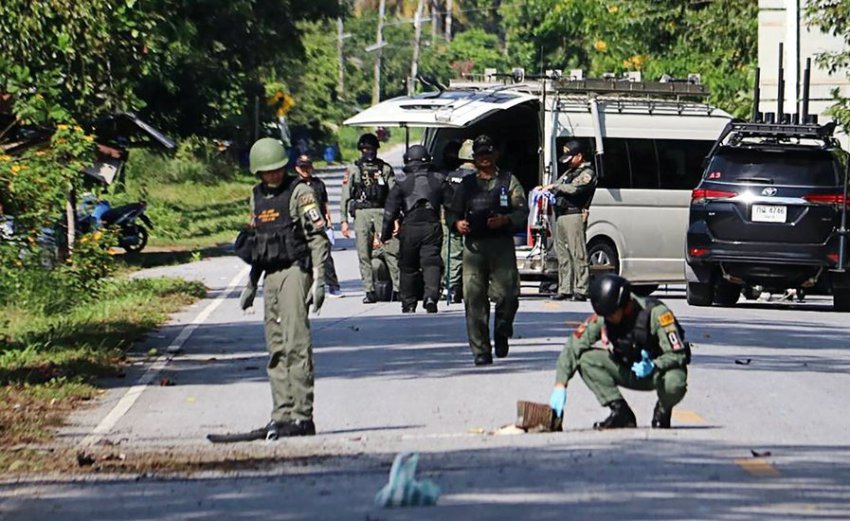 Four civilians were among 10 people injured in a bombing in Pattani province, a day after a soldier died in a similar blast in the deep south of southern Thailand.

The bombings were the first to strike southern Thailand on back-to-back days since Barisan Revolusi Nasional (BRN) rebels declared a unilateral ceasefire in early April. However deadly shootings linked to the insurgents have occurred since then.

Wednesday’s attack occurred at 5:30 p.m. when a patrol squad assigned to the 42nd Ranger Task Force arrived at Bang Maruad village. The squad was patrolling the areas to keep the peace when the bomb was set off” Benar News reports. Authorities believe insurgents were responsible for the attack, aimed at stirring up calm situation.

Six soldiers and a family of four, including two children, were injured. Other officials said the family members suffered minor bruises.

On Tuesday, a blast in nearby Mae Lan district of Pattani killed one of six soldiers on patrol. Officials said it was the first fatal bombing since a COVID-19-related ceasefire began.

An analyst with a regional think-tank alleged that members of BRN, the border region’s most powerful insurgent group, carried out the attacks. BRN began direct negotiations for peace with a government team earlier this year. The COVID-19 pandemic led to a pause in the negotiations.

Meanwhile, Col. Watcharagorn On-ngern, deputy spokesman for the military’s regional command (ISOC-4), told reporters that two of the soldiers struck by shrapnel on Wednesday were in serious condition at Pattani Hospital.

“From the inspection of the site, we found the traces of IED buried next to a cement column.

“Cpl. Supoj Charoensuk, 37, was hit with shrapnel in his face and left side of his head. Ranger Suchart Koblam was struck in his face, left shoulder and left leg,” he said.

On Tuesday, the first bombing killed one soldier in Mae Lan, another district in Pattani, according to officials. Authorities said suspected insurgents used a remotely detonated homemade bomb to attack the soldiers. No soldiers were injured in that bombing attack.

“The attack could happen at any time in the region, depending on good timing. I believe the BRN still wants to mount attacks in order to show that they exist,” he said.

Despite this, Srisompob expected BRN to work with government negotiators to bring peace to the region.

“In the next couple of years, I believe they will try to solve the issue by peaceful means,” he said.

The government’s chief negotiator, Gen. Wanlop Rugsanaoh, previously said he anticipated meeting with the BRN team next month in Kuala Lumpur if travel restrictions with Malaysia were lifted.

A Malaysian government representative has served as a facilitator for talks involving BRN and previous ones involving MARA Patani, a panel grouping together different rebel organizations and factions in Southern Thailand’s deep south.