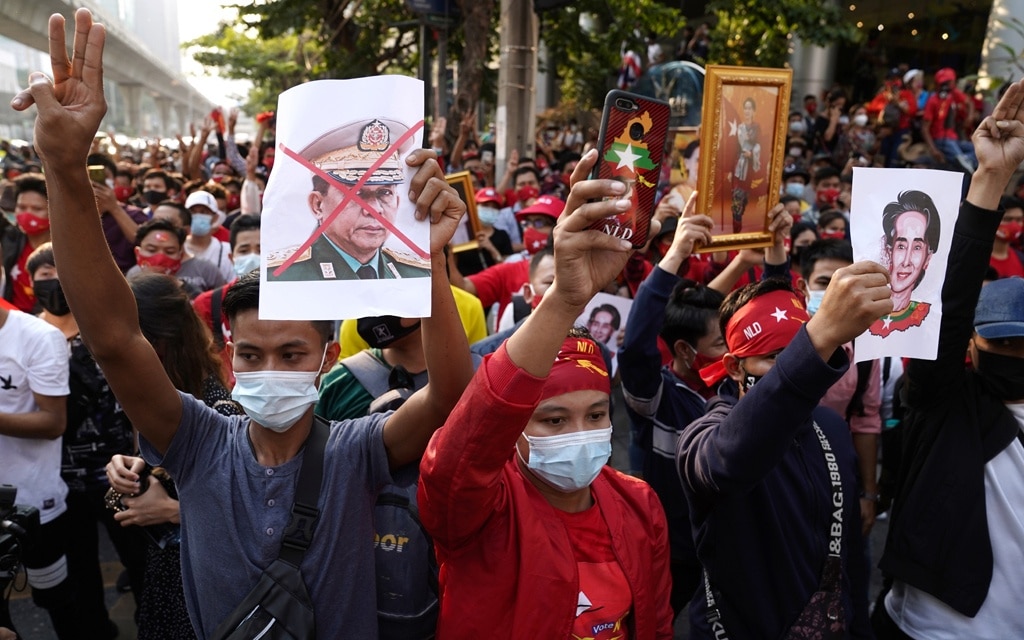 The army alleges the recent landslide election win by Ms Aung San Suu Kyi’s party was marred by fraud. She urged supporters to “protest against the coup”.

In a letter written in preparation for her impending detention, she said the military’s actions would put the country back under a dictatorship. The military has already announced replacements for a number of ministers.

On the streets of the main city, Yangon, people said they felt their hard-fought battle for democracy had been lost.

One 25-year-old resident, who asked not to be named, told the BBC: “Waking up to learn your world has been completely turned upside down overnight was not a new feeling, but a feeling that I thought that we had moved on from, and one that I never thought we’d be forced to feel again.”

How did the coup unfold?

Aung San Suu Kyi, Myanmar’s de facto leader spent nearly 15 years in detention between 1989 and 2010. She was internationally hailed as a beacon of democracy and received the Nobel Peace Prize in 1991.

But her international reputation suffered severely following an army crackdown on the mostly Muslim Rohingya minority. Former supporters accused her of refusing to condemn the military or acknowledge accounts of atrocities.

In the early hours of Monday, the army’s TV station said power had been handed over to commander-in-chief Min Aung Hlaing.

Ms Suu Kyi, President Win Myint and other leaders of the National League for Democracy (NLD) were arrested in a series of raids. It is not clear where they are being held.

No major violence has been reported. Soldiers blocked roads in the capital, Nay Pyi Taw, and the main city, Yangon. International and domestic TV channels, including the state broadcaster, went off air. Internet and phone services were disrupted. Banks said they had been forced to close.

Later, the military announced that 24 ministers and deputies had been removed, and 11 replacements had been named, including in finance, health, the interior and foreign affairs.

The military takeover follows weeks of tensions between the armed forces and the government following parliamentary elections lost by the army-backed opposition.

The opposition had demanded a re-run of the election, raising allegations of widespread fraud that were not backed by the electoral commission.

So why has the army acted now?

So it is official. The armed forces in Myanmar have confirmed that they have carried out a coup d’etat, their first against a civilian government since 1962, and in apparent violation of the constitution which the military promised to honour as recently as last Saturday.

The grievances which have been driving tension between the military and the government are well enough known. The military-backed party, the USDP, performed poorly in last November’s general election, whereas the NLD did even better than in 2015.

The timing of this coup is also easily explained. This week the first session of parliament since the election was due to start, which would have enshrined the election result by approving the next government. That will no longer happen.

But the military’s longer game plan is hard to fathom. What do they plan to do in the year they have given themselves to run the country? There will be public anger over a coup so soon after an election in which 70% of voters defied the Covid-19 pandemic to vote so overwhelmingly for Aung San Suu Kyi.

Famously stubborn, she is unlikely to co-operate with a gun held to her head. Her ally, President Win Myint, is the only person authorised under the constitution to enact a state of emergency. He has been detained with her.

For the moment the military’s action appears reckless, and puts Myanmar on a perilous path.

Jonathan Head is the South East Asia Correspondent for BBC News, the main news gathering department of the BBC, and its 24-hour television news channels BBC World News and BBC News Channel, as well as the BBC’s domestic television and radio channels and the BBC World Service

Myanmar Generals Dupe IMF Out of US$350 Million Aid Money