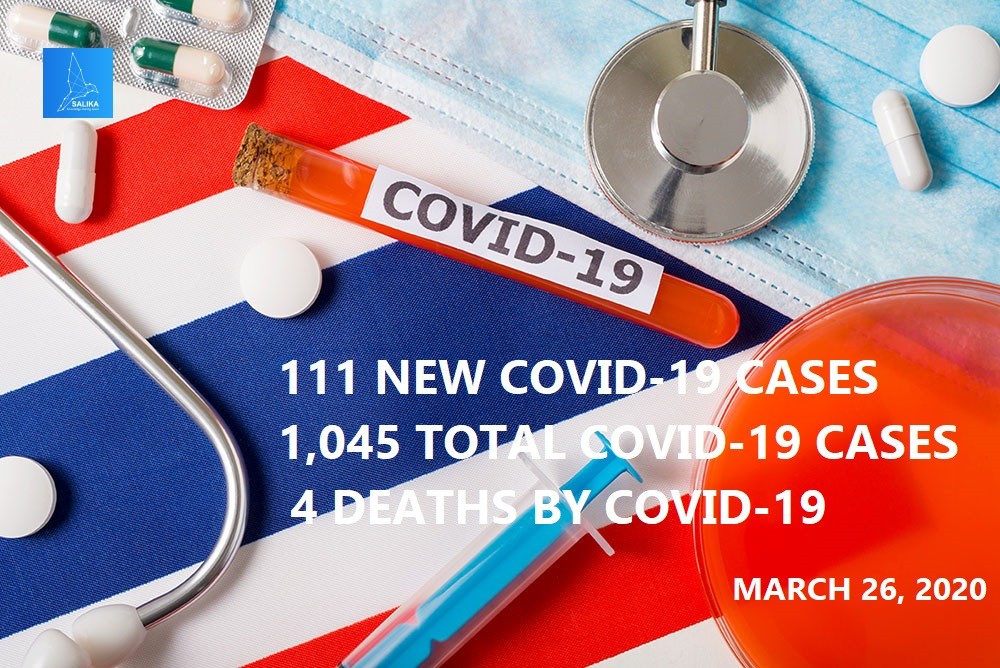 Dr Anupong Suchariyakul, from the Health Department said of the accumulative 1,045 patients, 953 were at hospitals. Including four severely ill people. Consequently 88 people had recovered and have already discharged from hospitals.

Dr Anupong stressed that the local outbreak soared due to transmission from visitors to entertainment places. Which were boxing stadiums and religious ceremonies in Malaysia.

He encouraged these people to report for examination so that health officials can effectively control the disease.

“Their failure to join in self-isolation and pass examination has been transmuting the disease nationwide since March 16,” Dr Anupong  told the Bangkok Post.

They included six people from boxing stadiums, three from entertainment places, 19 people in contact with previous patients, and one resident of Pattani province who earlier attended a religious ceremony in Malaysia.

It involves19 people – five Thais and one foreigner who arrived from other countries, nine people who either lived or worked in crowded areas or in places frequented by foreigners, including hotel staff, and three medical officials who contracted the disease because patients concealed their infection-risk histories.

the group consisted of 63 patients whose infection cases were under investigation. Dr Anupong said that 18 patients recovered and were discharged from hospitals on Thursday.

The UN’s health agency The World Health Organization WHO with critics saying it did not react quickly or strongly enough to Covid-19. The coronavirus emerged in Wuhan, China, and was later named Covid-19 after pressure from China.

The WHO has also been accused of delaying sounding the alarm for fear of offending Beijing. Furthermore for waiting too long to declare the Covid-19 outbreak a global pandemic. Also for failing to coordinate a coherent international response.

A consensus appears to be emerging on the need to close down public spaces to limit the spread but the WHO has given little guidance on these measures.

WHO remains surprisingly silent and absent in all of these pragmatic questions,” Antoine Flahault, head of the Institute of Global Health at the University of Geneva, wrote in The Lancet medical review. All countries have to react and take action without any conducting from WHO.

The WHO’s Director-General declared on Jan, 30, 2020, a Public Health Emergency of International Concern. Which also allowed him to release subsequent recommendations. However none were issued with regard to what to do, and when to do it, at the country level. – Read more…..

Why is Malaria Medication Being Used to Fight Covid-19 Coronavirus