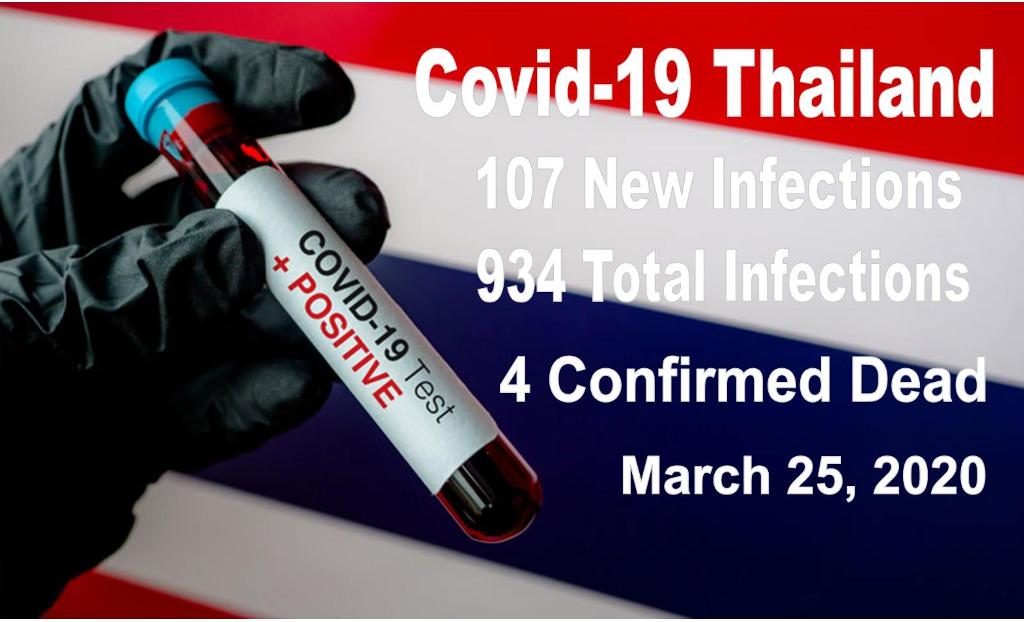 The Health Department on Wednesday reported 107 new local cases of the coronavirus (Covid-19) in Thailand. Raising the total to 934 with deaths unchanged at four. The Thai health department is blaming the spread mainly on party goers. Dr Taweesin Wisanuyothin, spokesman of the health department, said the new cases were divided into three groups.

Five others were at entertainment places and included a visitor, a singer, a receptionist, a musician and an entertainment venue owner.

Fourteen others were in contact with previous patients including a vendor, a student, a taxi driver, an inmate and a policeman. Four others were attendees to religious ceremonies in Malaysia and they lived in the southern provinces of Songkhla and Yala.

13 consisted of six returnees and foreigners including those from Britain, France and Germany, five who were in crowded places or worked with foreigners including a cashier, and two doctors who treated a patient who refused to say at the first place that he had visited a boxing stadium. The doctors were in contact with 15 medical officials in operation rooms and 10 other doctors who had to be quarantined.

The third group comprised 67 people whose cases were under investigation.

Of the 934 patients, 70 recovered and were discharged including the latest group of 13, 860 remained at hospitals including four severely ill patients. The local death toll remained unchanged at four.

“Partygoers transmitted the disease to about 100 other people… Risk people must conduct social distancing both at workplaces and at home… Do not conceal your history of risky behaviors because health personnel would be infected and the health system would be heavily affected,” Dr Taweesin said.

People who returned to their home provinces risked transmitting the disease to other people close to them and local health officials and volunteers would reach them and advise them on self-isolation, he said.

Dr Asadang Ruay-ajin, spokesman of the Disease Control Department, said Covid-19 spread to virtually all regions in the country and 25% of transmission resulted from people from boxing stadiums and 10% each from entertainment places and risk areas and people with risky occupations. – Source Bangkok Post