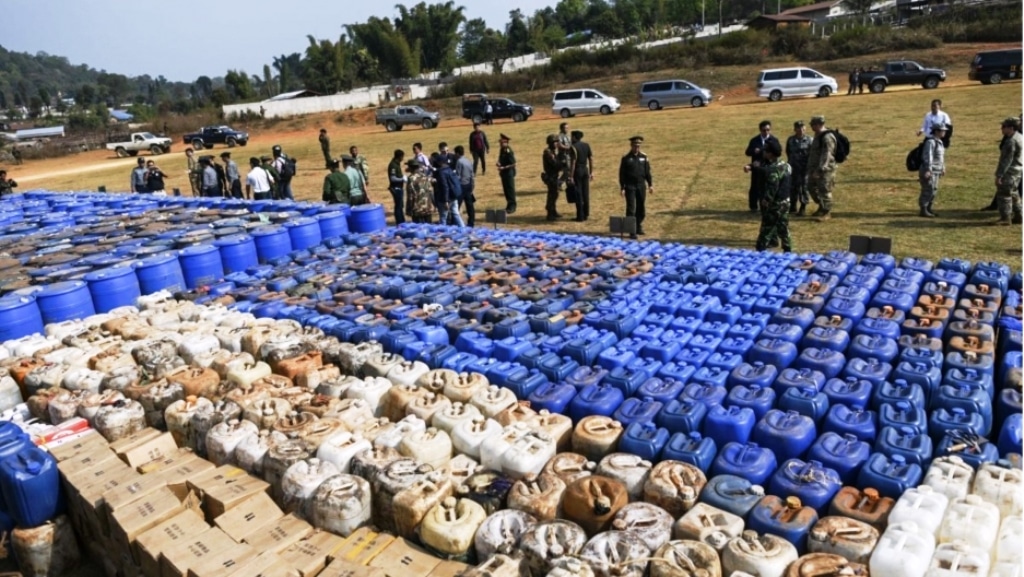 Methamphetamine production has quadrupled in Thailand’s Golden Triangle region in recent years, the head of the UNODC. Jeremy Douglas the Regional Representative of the United Nations Office on Drugs and Crime (UNODC) for Southeast Asia says that illegal manufacturers of synthetic drugs have also changed ingredients used to start the process.

In the past, drug enforcement agencies tracked pseudoephedrine and ephedrine, two chemicals used to produce methamphetamine, said Jeremy Douglas said. Now, three pre-cursors – phenyl 2-propanone, caffeine and propionyl chloride – are being used, according to a Thai press release by the Office of Narcotics Control Board (ONCB).

“The surge that has come out of the Golden Triangle, we have never seen something like this globally, so quickly,” he said.

“There are indications that there are very sophisticated criminal activities around chemicals going on inside the Golden Triangle right now,” Douglas said. Douglas was referring to the Golden Triangle an area where the borders of Thailand, Laos and Myanmar come together.

Douglas, who spoke to BenarNews on the sideline of a meeting hosted by the Office of Narcotics Control Board of Thailand, said drug enforcers were focusing on the last six or seven years. Noting “huge surges in chemical shipments going into Laos” at the same time.

“The problem is that the foundational chemicals we usually see going into meth production aren’t being found. Pseudoephedrine and ephedrine are the profile of the drug when seized is made from them.

So again, the indication is a diversity of chemicals and special capacity to use them,” he said.

The meeting was held to announce a report on drugs in the region, however officials did not release copies to the media.

Douglas expressed concern for the future, noting there were more drug seizures in January than in the same month in 2020. He said another surge in 2021 could occur unless steps are taken. “Fundamentally, if you are going to slow the flow of drugs out, you have to slow the flow of chemicals in,” he said.

“It is going to be a huge challenge for the region to address their industry problems and we have to get everybody at one table because what we see is organized crime.”

Thai Justice Minister Somsak Thepsutin said the report noted the three precursors have been released in large quantities within the Golden Triangle.

“The objective is to seize these precursors. Because the precursor weighing 1 metric ton (1,000 kg) can produce 10 million tablets of methamphetamine,” Somsak said. “This effort to seize the new precursors and chemicals is an important indicator to demonstrate the current drug problem.”

“In the past fiscal year 2020 (ending September 2020), we were able to seize 67 percent of the precursors and chemicals and continued to shut down drug production sites,” Somsak said.

This report has been updated to clarify information from Jeremy Douglas, Southeast Asia and Pacific representative for the United Nations Office on Drugs and Crime (UNODC).