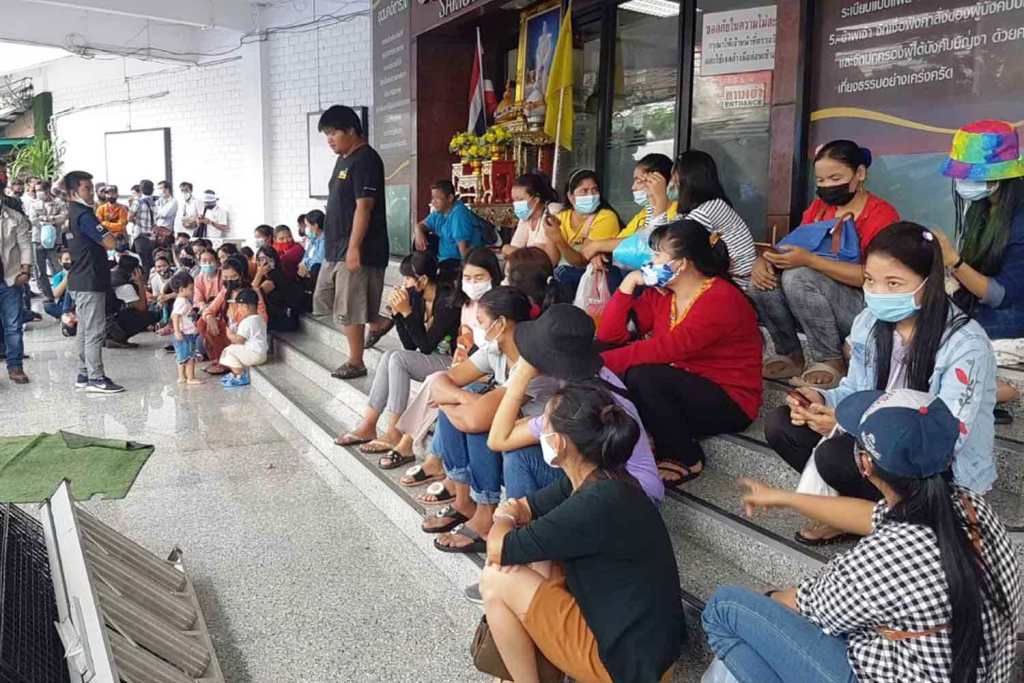 A 45-year-old woman has been arrested and charged with cheating hundreds of Migrant workers out of about 7 million baht with fraudulent visa services.

Police and labor officials arrested Wassana Wongkhamjan at her house on Friday morning. It is the registered office of KPS Management Co.

The officials had court warrants for her arrest and to search the premises. They found about 40 passports and receipts in the house and were examining them.

Police said Ms Wassana denied the public fraud charge. She told police that she had not received money from migrant workers, but job brokers had.

Her arrest followed the complaints filed by about 300 migrant workers at the police station on Thursday. They said the visa service company claimed it could arrange the renewal of their passports and visas. They were charged 5,000-17,000 baht each, but never received the promised service.

Labour rights activist Achariya Ruangratanapong, who took the migrant workers to the police station, alleged on Friday that Ms Wassana tried to “get familiar” with senior police officers and reporters. She posed for photos with them and then posted the pictures and the logo of a mainstream TV channel on social media.

She allegedly offered passport and visa services for migrant workers since March, he said. The migrant workers took the action because of the approaching Oct 31 deadline for their work permit renewal, he told the Bangkok Post.

About 300 migrant workers, who had paid about 7 million baht in total to her company. They were filing their complaints with police, Mr Achariya said.

In August 2019, migrant teachers were arrested and deported from Ranong leaving 2,800 migrant children without an education. This event has been called the ‘Ranong Raid’ by local media. It has also captured NGO’s and Human Rights Advocates attention within Thailand. Advocates say the school closures have driven many former pupils into Thailand’s illegal seafood industry jobs.

Chit Su has been stuck at home peeling crabs with her grandmother since her school for Burmese migrants closed last year in southern Thailand. Even working together, they make less than a daily minimum wage.

“This is hard work… if I study I’ll get to do a job that’s less tough,” said Chit Su, 15, whose name has been changed to protect her identity. “But now, if I don’t help my grandma, we won’t have any money.”

Chit Su is among some 2,800 migrant children who have been affected by the raid on her migrant learning centre, Ranonghtarni, which led to the arrest of more than 30 Burmese teachers and forced the school to close.

Nine other educational centres funded by charities and private donors in Ranong halted classes soon afterwards, fearing they could also be raided. One has since reopened.

The Education Ministry said it was tracking down former pupils who are still not attending classes in order to enroll them in public schools, non-formal education programs and community learning centres.

Like Chit Su, many of the former students now work at private fish markets or at home shelling crabs for a multi-billion dollar industry that has faced global scrutiny in recent years over the abuse of Thai and migrant workers.

Reuters interviewed 11 child workers in Ranong, Thailand who were working in the industry without permits.

“The consequences (of the closures) were much more severe (than the officials) predicted – it resulted in child labour in the fishing industry,” said Adisorn Kerdmongkol, coordinator at the Migrant Working Group, a network of NGOs helping migrants. “This is worrying… and made worse with COVID-19,” he added.