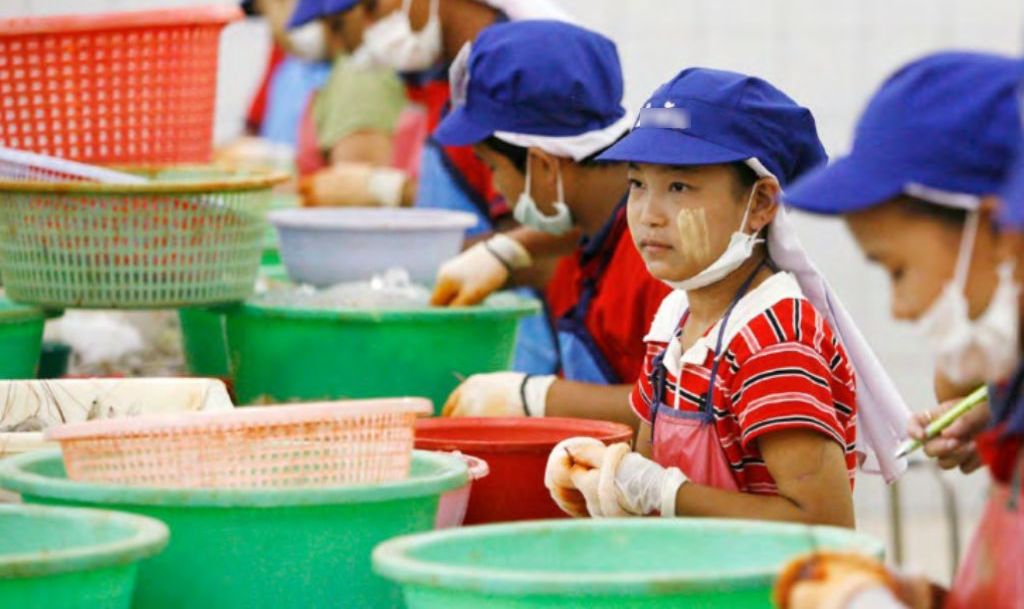 In August 2019, migrant teachers were arrested and deported from Ranong leaving 2,800 migrant children without an education. This event has been called the ‘Ranong Raid’ by local media. It has also captured NGO’s and Human Rights Advocates attention within Thailand. Advocates say the school closures have driven many former pupils into Thailand’s illegal seafood industry jobs.

Chit Su has been stuck at home peeling crabs with her grandmother since her school for Burmese migrants closed last year in southern Thailand. Even working together, they make less than a daily minimum wage.

“This is hard work… if I study I’ll get to do a job that’s less tough,” said Chit Su, 15, whose name has been changed to protect her identity. “But now, if I don’t help my grandma, we won’t have any money.”

Chit Su is among some 2,800 migrant children who have been affected by the raid on her migrant learning centre, Ranonghtarni, which led to the arrest of more than 30 Burmese teachers and forced the school to close.

Nine other educational centres funded by charities and private donors in Ranong halted classes soon afterwards, fearing they could also be raided. One has since reopened.

The Education Ministry said it was tracking down former pupils who are still not attending classes in order to enroll them in public schools, non-formal education programs and community learning centres.

Like Chit Su, many of the former students now work at private fish markets or at home shelling crabs for a multi-billion dollar industry that has faced global scrutiny in recent years over the abuse of Thai and migrant workers.

Reuters interviewed 11 child workers in Ranong who were working in the industry without permits.

“The consequences (of the closures) were much more severe (than the officials) predicted – it resulted in child labour in the fishing industry,” said Adisorn Kerdmongkol, coordinator at the Migrant Working Group, a network of NGOs helping migrants. “This is worrying… and made worse with COVID-19,” he added.

Millions of children worldwide could be pushed into work as schools remain shut and families struggle to survive the economic fallout of COVID-19, the United Nations has warned.

In Thailand, the pandemic has led to a shift from seafood processing at factories or peeling sheds towards home-based work. Often done by migrants, according to activists.

In one mainly Burmese neighborhood in Ranong’s Muang district, children as young as 10 used sharp tools to help their families shell crabs brought each day by Seafood Industry suppliers.

Besides a ban on under 18s undertaking hazardous work, children aged below 15 are banned from all labour in Thailand.

The Thai Labour Ministry does not specifically list Seafood Industry processing as hazardous work but children’s rights campaigners said it falls into the category. Two labour lawyers said it depends on what exactly the job involves.

But despite the country’s laws, 177,000 children aged five to 17 work as labourers in Thailand – three quarters in hazardous jobs, a 2018 survey by the government and the United Nations showed.

Still, the head of one of the main bodies representing Thai seafood producers said the industry was more concerned about forced labour than child labour.

“That Burmese children are out of school and are working is a way for them to survive,” said Panisuan Jamnarnwej, honorary president of the Thai Frozen Foods Association.

The Department of Labour Protection and Welfare declined to comment, while Ranong’s provincial administration did not respond to repeated requests for comment.

It is not clear how many migrant learning centres operate because most are not registered, the Education Ministry said. They are not funded by the government and in most areas children are taught in their own language as opposed to Thai.

Since the closure of the centres in Ranong, some of the children have already enrolled in Thai public schools. While others are studying in non-formal education systems such as learning in migrant camps, according to Save the Children.

But the charity estimated that up to 500 of them have dropped out of education altogether.

Across Thailand, migrant children often drop out of school between 10 and 12, mostly due to financial constraints, according to the International Organisation for Migration (IOM).

“Migrant children constitute the largest group of children out of school in Thailand,” said Maria Moita, IOM’s acting chief of mission to Thailand, putting the number at about 200,000.

Of the 10 learning centres that closed, only one managed by the Marist Asia Foundation has reopened after getting work permits for Burmese teachers and adding a Thai curriculum.

“The government is not doing anything to help these children. It’s like we’re abandoning them,” said Prasit Rugklin, the charity’s secretary.

At the Education Ministry, however, a senior official said authorities “will not abandon these children”.

Var Say Hta, a Burmese monk who manages Ranonghtarni – which had more than 1,100 students before the raid – said at least 150 former students aged 15 or over are now working.

Another of the school’s former students – 17-year-old Soe Win – works 12 hours a day at a private fish market now.

He earns 300 baht per day, gets two days off a month and spends his hours packing ice into boxes of fish and loading them onto trucks. School would be better, he said.

“The problem is, only my mum is working because my dad’s paralysed,” said Soe Win, whose name has been changed to protect his identity. “I want to study because it’s more fun at school.” – Reuters