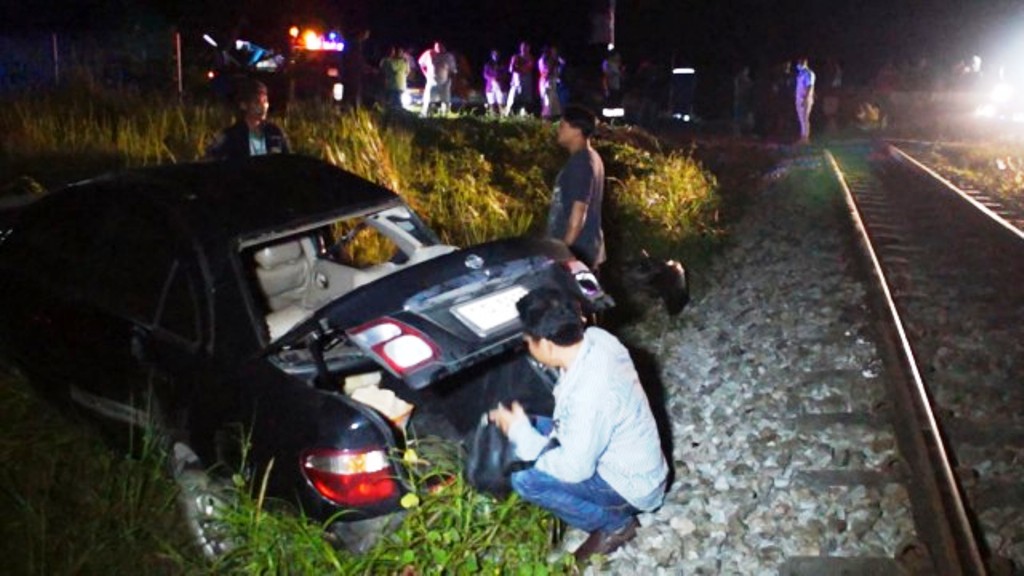 A motorist escaped death and ended up with with minor injuries when his car was struck by a train at an unguarded crossing in southern Thailand.

The collision occurred on the crossing at Nong Muk village in tambon Tak Daed in Southern Thailand’s Chumphon Province about 10.30pm, police said.

Police and rescue workers who rushed to the scene reported finding a severely damaged black Nissan sedan with Krabi licence plates lying alongside the tracks near the railway crossing.

The driver, Kamol Srikhong, of Yantakhao district in Trang, had already been taken to hospital. He suffered only a broken collarbone and bruising, according to media reports. Police said the injured man was an amulet trader.

Meanwhile, five people in a passenger car were injured after the driver of a pickup fell asleep at the wheel and crashed into them on old San Kampaeng Road in northern Thailand’s Chiang Mai province on Thursday.

The heavy collision trapped the passengers in the car. Rescuers had to use equipment to free them just as the vehicle caught fire. Another group of rescuers quickly succeeded in extinguishing the flames, preventing further casualties.

The police are investigating to find out exactly how the crash occurred. San Kamphaeng police station in Chiang Mai is holding the vehicles until the injured retrieve them.

A pickup driver was killed when a pickup truck crashed into a freight truck early onin Nakhon Ratchasima province of northeastern Thailand. At around 4 am, medical emergency officials were called after the fatal accident.

When police and a local rescue team arrived at the scene, they found a black pickup, with its front end severely damaged. The driver, Thanapat Vichitsanoi, 50, suffered severe injuries and was found dead in his vehicle.

His body was sent for autopsy to Maharat Nakhon Ratchasima Hospital.

The driver of the trailer truck, Rattanakorn Nansuwan, 34, said that the pick-up had crashed into his trailer when he was making a U-turn.