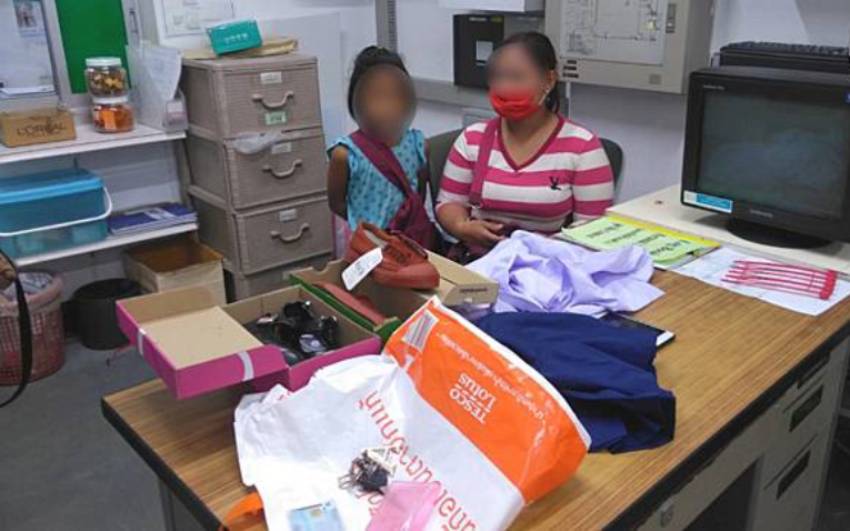 The first day of school on Wednesday was not a happy time for every child and parent, some of whom had to borrow, beg or even steal school uniforms. Just so they could send their children to class in a uniform like everyone else.

This year, the Covid-19 pandemic delayed the opening of the new term by almost two months. But the outbreak also compounded the financial suffering of parents, several of whom lost their jobs from business closures or saw their incomes dwindle.

In Chumphon, a mother of four went to a local shopping mall with her eight-year-old daughter on Tuesday. She grabbed school uniform skirts and shorts from the racks and shoes from the shelves — although she had no intention of paying for them.

She and her daughter were caught by the store’s security guards and taken to a backroom office where she was detained. Lang Suan police were called and they arrived shortly later to question the mother, 26.

The mother was remorseful but insisted she had no other way out but to steal the uniforms. She and her husband were down on their luck, struggling to find a job after being laid off at the height of the pandemic.

Mother had no money for school uniforms She told police her family was poor. Buying the uniforms for her children was simply out of the question.

The mother said she would rather shoplift than let her children turn up on the first day of school in plain clothes. That would have embarrassed them.

When the mother and daughter were being escorted to the backroom, shoppers had noticed the incident. Some of them, who were also shopping for uniforms for their children, reached into their pockets and scraped together 1,200 baht to pay for the uniforms for the family.

The donors also asked the store staff not to press charges against the mother. They felt that if the mother was arrested and remanded in police custody, her family would be in even deeper trouble.

The store agreed not lay charges although they gave her a warning before releasing her and her daughter.

Sometime later, Suchart Saengklud, director of the Homeless and Destitute Centre in Chumphon, visited the family who live in a run-down house in the middle of a rubber farm owned by a local businessman in tambon Chong Mai Kaew in Thung Tako district of Chumphon.

Their four children attend kindergarten and Prathom Suksa (primary school years) 1, 3, 4. Their schools are more than 10 kilometres from the house. “We were down to our last 300 baht and we felt we had no choice but to do what we did,” she said.

In Chon Buri, one mother also found herself in dire straits after six new school uniforms she bought for her daughter disappeared while they were put out to dry on the clothes line at her rented apartment in Nong Prue, Bang Lamung district.

Darin Arbsuwan, 56, who works as a masseuse, told the Bangkok Post the pandemic had left her without a job. She delved into her savings to buy uniforms for her two daughters. The shirts had the girls’ names sewn into them.

She insisted uniform thefts had not occurred in her community before and the Covid-19 outbreak may have pushed up the crime rate. She decided to post a message online to warn people about the theft and look after their belongings, saying anything can happen during the economic downturn. “You never know when a thief will strike,” Ms Darin said. “I want to tell the thief that everyone is also in trouble.”

The mother lodged a complaint with the Nong Prue police who have launched an investigation. The police officers chipped in some of their own money to buy new school uniforms for Ms Darin’s two daughters.

The mother thanked the officers for taking her daughters to buy new uniforms. Her daughters were happy to go back to school with the new clothes and stationery the officers also bought for them.

The government postponed the start of school semester this year from May 16 to July 1.