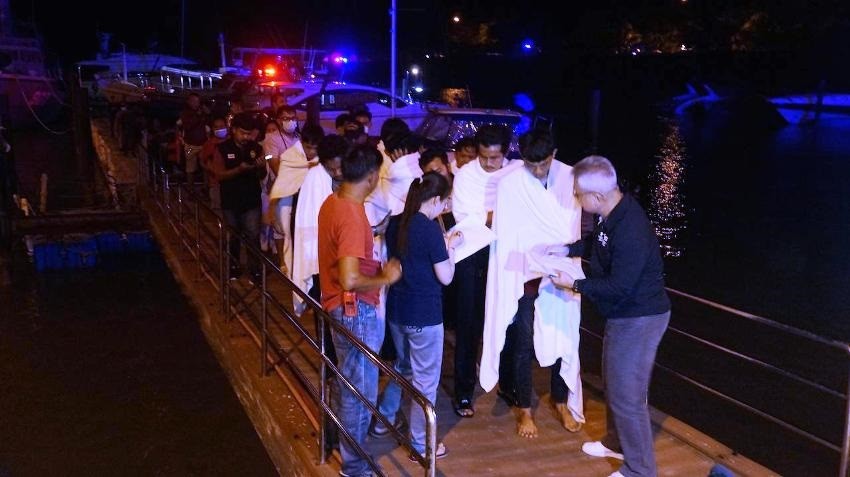 Seven people are missing nine others safely rescued after a ferry was hit by a strong storm and capsized after leaving Koh Samui island. heading for the Don Sak boat pier on the mainland on Saturday night, Thai media reported.

The ferry, Raja 4, between Don Sak and Koh Samui, was loaded with garbage three 10-wheel lorries and a pick-up truck. On board the ferry were 11 crewmen, four drivers of the three lorries and the pick-up and a saleswoman.

The ferry departed from Koh Samui at 8.48pm, at about 10pm, it was hit by a strong storm. Heavy waves caused the ferry to capsize about 2 nautical miles from Koh Samui. I happened between Koh 4 and Koh 5 islands.

Wichawut Jinto, the governor of Surat Thani, rushed to the boat landing of the Raja Ferry Plc at tambon Lipa Noy on Koh Samui. Once there he assisted in directing the rescue operation. He was accompanied at the rescue centre by Suthipong Klai-udom; the deputy governor, Teerapong Chuaychu; the Koh Samui district chief; and medical staff from Koh Samui Hospital.

The marine police dispatched two patrol boats, R6 and R10, for the rescue. They managed to safely pluck  from nine people from stormy seas. They were seven ferry crew including the skipper and the drivers of two 10-wheel lorries.

Seven other people – four ferry crewmen; the drivers of the other 10-wheel lorry and the pick-up; and the saleswoman – were still missing.

Mr Wichawut said the rescue operation was difficult in the rain while the sea waves were 2-3 meters high.

The rescue team continued with the search for the missing into the night.