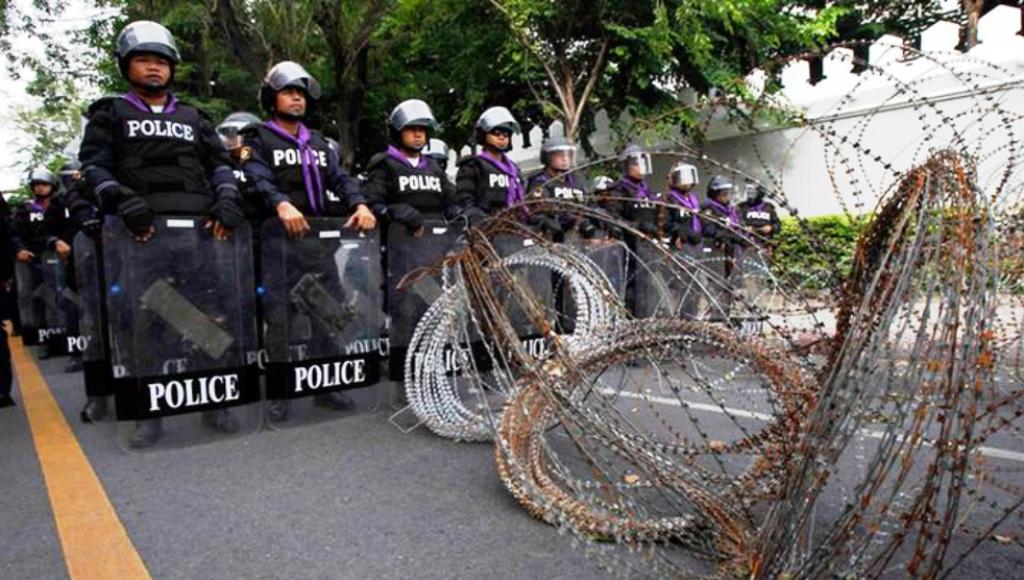 More than 12,000 riot control police will be deployed to handle anti-government demonstrations planned outside parliament on Friday and other important places in Bangkok this weekend.

A Facebook page named “Mob Fest” on Thursday also posted a message urging supporters to rally outside parliament at 5pm on Friday.

“We will watch a live broadcast of the no-confidence debate on a big screen,” the page declared. “We will yell at the government and debate on 10 urgent issues proposed by the people. Over the past seven years since Gen Prayut Chan-o-cha seized power, he has taken the people on a roller-coaster ride with a host of promises and it has all come crashing down.”

Parliament will vote on the opposition’s no-confidence motion against Prime Minister Prayut and nine of his cabinet ministers on Saturday.

The Facebook page of the United Front of Thammasat and Demonstration, which is part of the anti-government Ratsadorn (People’s) Movement, announced on Thursday the group would hold a rally on Saturday, with the time and location to be announced on Friday.

“There are two days to go before the deadline. People who champion democracy are requested to prepare for it,” the group said.

Arnon Nampa, a co-leader of the Ratsadorn Group, took to Facebook to urge demonstrators to avoid using violence when confronting authorities. He is being detained at Bangkok Remand Prison on a range of charges, including lese majeste. “Using violence in retaliation to the state which provoked violence will not bring victory,” he posted.

Pol Maj Gen Piya Tawichai, deputy commissioner of the Metropolitan Police Bureau (MPB), said on Thursday that 12 companies of 1,800 crowd control officers would be sent to handle protesters over the weekend.

Police expect the protesters to gather at Democracy Monument and outside parliament at the Kiak Kai intersection.

Wanwichit Boonprong, a political science lecturer at Rangsit University, predicted the anti-government movement would not be as active as before, but that confrontations between protesters and security officers could still turn violent.

The movement did not have new issues to engage public attention, Mr Wanwichit said, but the delay in the charter amendment process and economic problems could be thorny issues for the government.

Legality of the charter amendment

Meanwhile, the Constitutional Court on Thursday accepted a petition seeking its ruling on the legality of proposed charter amendments.

The court said it was authorised by the constitution to rule on problems related to the duties and powers of the House of Representatives, the Senate, parliament, cabinet and independent agencies, so the petition was within its scope.

On Feb 9, parliament agreed the court should rule on the legality of the charter amendment process following a motion proposed by Palang Pracharath Party (PPRP) list MP Paiboon Nititawan and Senator Somchai Sawaengkarn.

They said they were concerned that proposed amendments paving the way for the creation of a charter drafting assembly (CDA) could be unconstitutional because parliament was only authorised to change the charter, not create a new one.

PPRP list MP Chaiwut Thanakhamanusorn said on Thursday the court’s decision to accept the petition would not affect parliament’s second reading of the proposed charter amendments on Feb 24-25.

Pheu Thai secretary-general Prasert Jantararuangtong, however, expressed concern the charter amendment process could be delayed further if the court ruled against it.

After the no-confidence debate ends on Saturday, parliament will have one week’s work left before going into recess on Feb 28.

They are expected to take some time because more than 100 parliamentarians have requested to fine-tune two charter amendment bills, one proposed by the government and the other by the opposition.

Parliament adopted the two bills in the first reading on Nov 18 last year.