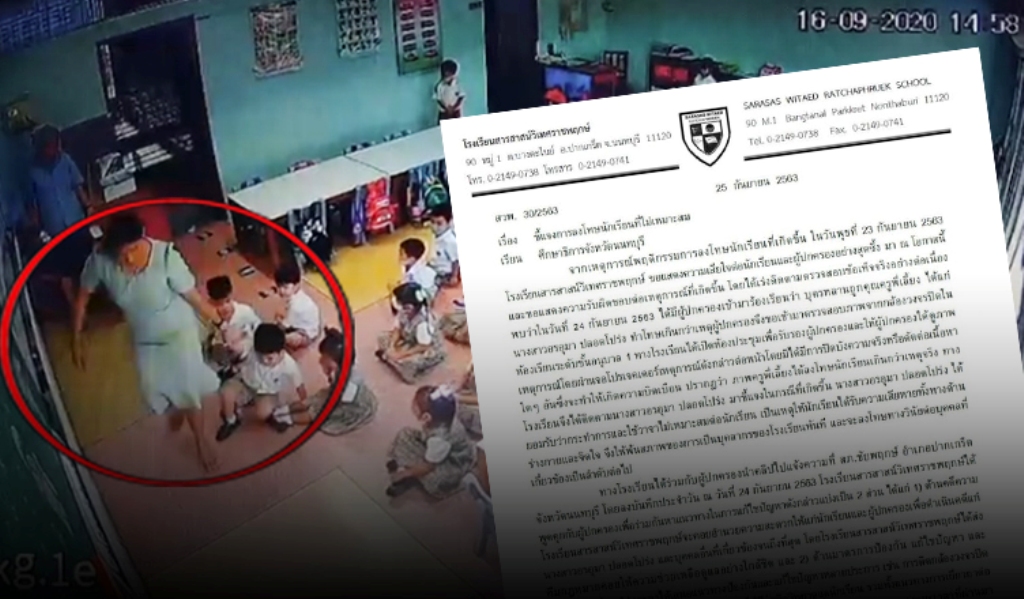 Police are weighing assault charges against a kindergarten teacher fired for beating the kindergarten students at a private school in Nonthaburi. A YouTube video posted to social media of the incidents provoked outrage among parents of the kindergarten and the public.

A group of kindergarten parents on Saturday filed a complaint with police, asking them to take action over the assaults on the kindergarten children. Some were as young as 3 years-old.

Police have instructed investigators to expedite the case and work with psychiatrists to question kindergarten students who were physically assaulted.

Thai media reported that officers administered drug tests on the kindergarten teacher which were negative.

Several YouTube videos that have been widely shared online show different occasions on which the teacher is seen assaulting kindergarten students at the private School in Pak Kret.

One YouTube video obtained from closed-circuit TV in the classroom. It showed the Kindergarten teacher pushing a student to the floor and pulling her hair in the presence of other teacher assistants. Even more nobody intervened. The incident happened on Sept 23 and drew anger from parents who saw the YouTube video after it was posted on Facebook on Friday.

Other videos show other examples of mistreatment by the same Kindergarten teacher. She was identified as Ornuma “Khru Jum” Plodprong. Some examples included the teacher the use of a broom to beat some students.

Angry parents went to the school and confronted Ms Ornuma physically on Friday. She later filed a complaint with police against the parents.

On Saturday, private school executives also sent a letter to Nonthaburi education authorities. Consequently about what they acknowledged were inappropriate punishments used by the kindergarten teacher against students.

The private school plans another meeting with parents on Tuesday. Above all to discuss further remedies to help the affected students and how to prevent a recurrence of such incidents.

The mother of one boy who was assaulted by the kindergarten teacher said she was puzzled as to why her son did not want to go to school. She noticed her son became frightened on seeing his teacher. She later learned what had happened to him after seeing the YouTube video.

Another parent, said his child had also been gripped with fear and did not want to go to school. He also questioned why other teaching staff who witnessed the incidents did not intervene. He said he would ask the private school to see more CCTV footage.