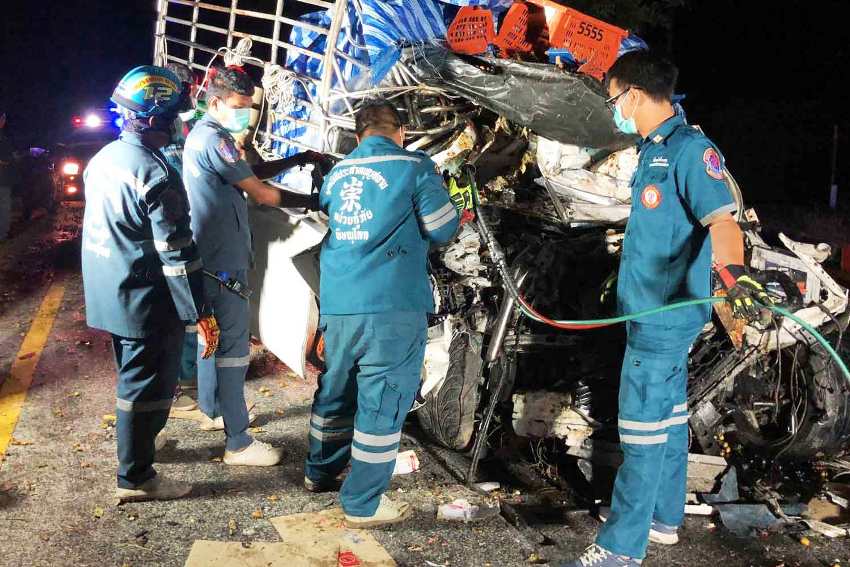 Tragically the driver of one pickup was killed and the other seriously injured, police said.

The accident occurred about 3.40am at kilometer 256 on Highway 11 (Phitsanulok-Uttaradit) near moo 4 village in tambon Thap Yai Chiang, Pol Capt Rangsan Ondee, of Phrom Phiram, said.

Consequently both Toyota pickup trucks were severely damaged in the violent crash.

The two drivers were trapped in their seats behind the steering wheels. Rescuers used hydraulic jacks to break open the crushed cabs and free them.

The driver of the Toyota Riva Pickup was seriously injured, he was also rushed to Wat Bot Hospital.

The driver of the Toyota Vios pickup, Won Surin, 50, from Bang Rakam district of Phitsanulok, was killed.

Four killed after being thrown from pickup truck in Chiang Rai Meanwhile, In Northern Thailand’s Chiang Rai Province  four men in their twenties, died after being hurled from a pickup truck. The pickup they were travelling in collided with a sedan

The bodies of four young men were found at the scene. Police also said the were crushed after the two vehicles lost control as a sedan car attempted to overtake their pickup truck at a dangerous bend.

The driver of the pickup truck, named as Mr Thanaphat was taken to hospital for treatment.

Police revealed the owner of the sedan car as 56-year-old Mr Jetsarit Thetthisit was from Chiang Rai. There were also two women in the sedan, Miss Namphung Chongkhuang and Miss Jenjira Srivichai also from both Chiang Rai.

They too were also taken to a local hospital and treated for their injuries, police are also investigating further.