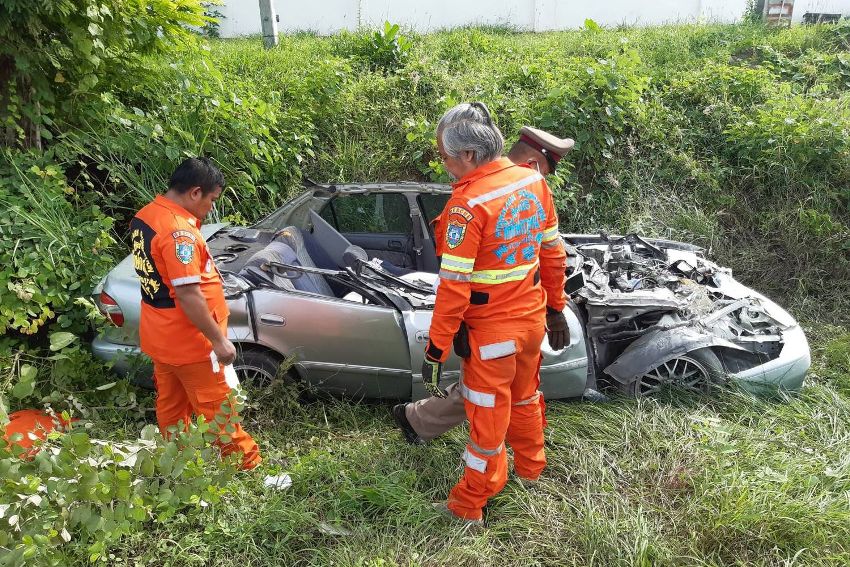 The driver of a Toyota sedan have died after crashing into the rear of a freight truck waiting to make a u-turn, in western Thailand Tuesday. Police reported the tragic accident happened at about 8.30am at kilometer marker 10 on a by-pass in Kanchaburi province.

Police said the six-wheel freight truck was stationary as the driver was waiting to make a U-turn. The Toyota Corolla sedan rammed into its rear end. The violent impact tore off the car’s roof and sent the wrecked vehicle into the roadside ditch.

The driver, Pakorn Sonsa-nguan, 22, from Saraburi, died behind the wheel. His friend, Saiyut Lampong, 28, from Nonthaburi who was in the passenger seat was seriously injured.

Prachuap Kongka, 49, the lorry driver, said he was delivering electrical appliances from Bangkok to a department store in Kanchanaburi, Thailand.

Police reported they were examining footage of CCTV security cameras, for further information. 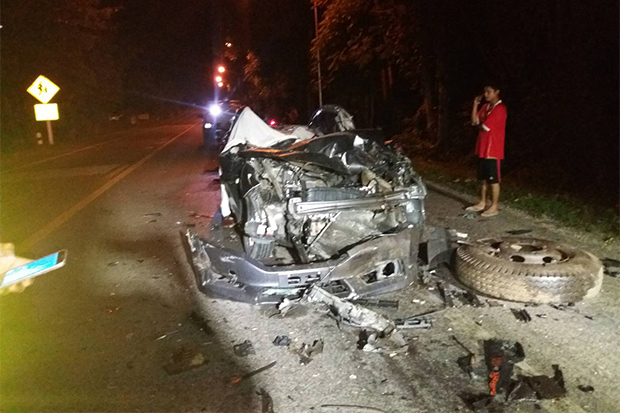 Last week a young doctor died when his car crashed into the rear of a freight truck loaded with bamboo in Kanchanaburi, Thailand.

The accident occurred about 9.50pm on Highway 323 (Kanchanaburi-Thong Pha Phum) in front of a school.

Police said Veerapat was returning to his residence at the hospital. His car ran into the back of a freight truck loaded with bamboo travelling ahead of him on an uphill curve.

Bamboo protruding from the rear of the freight truck sliced through the roof and windscreen.

Veerapat was decapitated. His body was sent to a hospital ahead of a postmortem examination.

Year after year, Thais are killed on the roads with an average of around 12,000 persons per year. Or about 2 persons per hour. In other words, every day, approximately 50 Thai are killed because of road accidents.

Thailand had the world’s second-highest rate of road fatalities per capita, surpassed only by war-afflicted, lawless Libya, according to a 2018 report from the World Health Organization. When it comes to per-capita motorcycle deaths, Thailand is No. 1.

The government vowed at a United Nations forum in 2015 to halve the number of road traffic deaths by 2020. With less than one year to go before the deadline. However, Thailand is a long way from fulfilling that promise, its roads still ranking among the world’s 10 most dangerous, with more than 20,000 preventable fatalities a year.