Questions continue to circulate amongst animal rights groups worldwide regarding the fate of service dogs that were allegedly left behind in Afghanistan. The US Pentagon has said that no service dogs left behind that were under military care.

American Humane said this week that the Department of Defense had left military contract working dogs in cages on the tarmac of Hamid Karzai International Airport.

“I am devastated by reports that the American government is pulling out of Kabul and leaving behind brave U.S. military contract working dogs to be tortured and killed at the hand of our enemies. These brave dogs do the same dangerous, lifesaving work as our military working dogs, and deserved a far better fate than the one to which they have been condemned,” said American Humane President and CEO Dr. Robin R. Ganzert.

The American government is pulling out of #Kabul and leaving behind brave U.S. military contract working dogs to be tortured and killed at the hand of our enemies. We stand ready to bring them home! Read our CEO @RobinGanzert‘s full statement: https://t.co/IKhBkm4B7a pic.twitter.com/ItFlthDTAi

“This senseless fate is made all the more tragic, as American Humane stands ready to not only help transport these contract K-9 soldiers to U.S. soil but also to provide for their lifetime medical care.”

Pentagon Press Secretary John Kirby stated on Twitter on Tuesday that there were no military dogs left in Afghanistan, instead, the dogs pictured on the tarmac were from Kabul Small Animal Rescue.

To correct erroneous reports, the U.S. Military did not leave any dogs in cages at Hamid Karzai International Airport, including the reported military working dogs. Photos circulating online were animals under the care of the Kabul Small Animal Rescue, not dogs under our care.

The Department of Defense Spokesman said all military dogs that were in Afghanistan left the country with their handlers.

The DoD Spokesman said the Kabul Small Animal Rescue chartered a contract plane to pick up the contract working dogs, but it never arrived. The fate of those dogs is currently unknown. 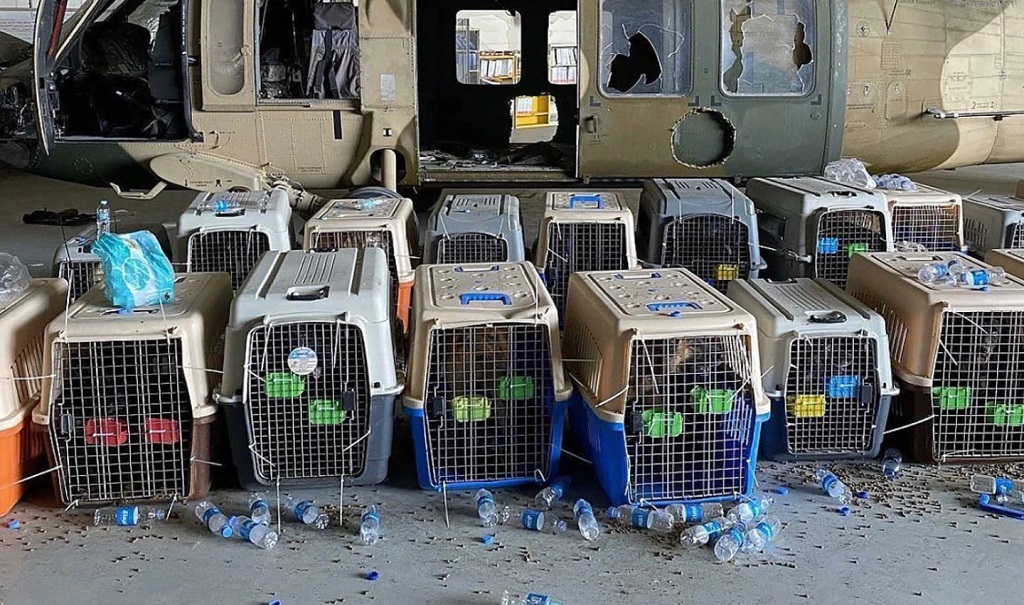 The International SPCA said on Tuesday that Charlotte Maxwell-Jones, founder of Kabul Small Animal Rescue, and partners have continued to work tirelessly to evacuate Maxwell-Jones and the 130 dogs in her care from Afghanistan. The ISPCA’s last contact with Maxwell-Jones was around 3 p.m. EST on Monday, Aug. 30.

According to the international organization, despite being at the airport during the ISIS-K bombing on Aug. 26 and facing a variety of threats, Maxwell-Jones is now off the Hamid Karzai International Airport grounds in Afghanistan. On Aug. 30, it said she was forced to leave the airport with a single puppy under her arm as final military evacuations occurred. She was escorted by the Taliban back to Kabul Small Animal Rescue, 7 miles outside the city. She remains in the shelter and is safe for the moment.

ISPCA said as the U.S. withdrawal from Afghanistan was happening, Maxwell-Jones managed to successfully rescue 46 working dogs and several personal pets that belonged to fleeing American families. However, the majority of her staff and cats in their care were never granted access to the airport.

They are safe in Kabul at a separate location for the time being.

Sony PlayStation 5 Restock Today: How To Pre-Order PS 5 Via ShopAtSC