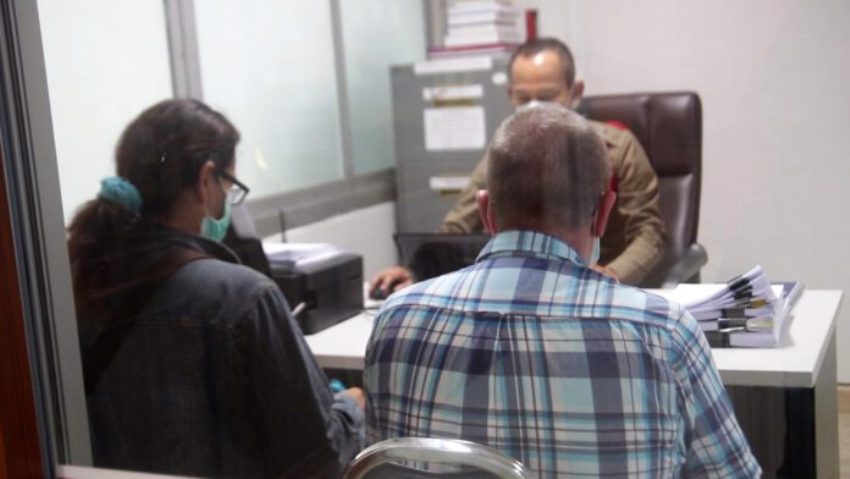 A group of Germans and their wives have been hauled into a police station for having allegedly removed a coronavirus barrier in Chiang Mai. The group were accused of “demolishing” a community Covid-19 blockade.

The Germans claim that the barrier was blocking entry to their homes in Moo 4 Nam Phrae, Chiang Mai.

The locals however disagreed, claiming that the barrier was vital in stopping the spread of COVID-19. A report was made to the local Police Station. Mr. Somsak Kanakham, the District Chief claimed that the act was illegal. And Furthermore the Germans should be prosecuted and also fined.

Chiang Mai Immigration was also called in to investigate the status of the Germans involved. According to Chiang Mai One News isn’t clear whether the barrier was completely preventing the Germans from accessing their properties. However from Thai media photo’s the barrier does look like it was blocking the Germans property access.

Chiang Mai One writes it’s one thing that people are made to have their temperature checked to enter an area – a perfectly reasonable request. But if these people were being denied access to the homes that would be another matter.

Xenophobia against white people across Thailand continues to rise as the government blames foreigners for the coronavirus pandemic in Thailand. As the outbreak takes a hold, some Thais have taken to blaming farang for their dire circumstances.

This week a photo was posted on Spotlight Thailand, a popular Facebook group with over 425,000 followers. It shows a Thai man and a woman who appear to be aiming slingshots playfully at the camera.

It is the enclosed caption, written in English and Thai, that has caused a flurry of concern among expatriates in Thailand. “Get out from my country if you cannot stay at home. Sh*t tourist#,” it says.

The post was uploaded from the resort island of Phuket where dozens of people have tested positive for the deadly new coronavirus that originated in Wuhan, China, late last year. The island’s tourism sector has been devastated by the sweeping lockdown that has been ordered in a bid to halt the spread of the virus. The Thai couple’s Facebook post has instantly gone viral and has alarmed foreigners in a country whose nerves are already frazzled by other recent manifestations of anti-Western sentiments during the Covid-19 pandemic.

“In the West [this post] of course would be viewed as a hate crime and an incitement to violence,” an expatriate from New York who lives in the northern city of Chiang Mai observed in a comment on Facebook. “Here, not so much,” he added.

The Covid-19 outbreak in Thailand has lead to an economically ruinous lockdown across the country. Some Thais have taken to blaming Farang for their dire circumstances.