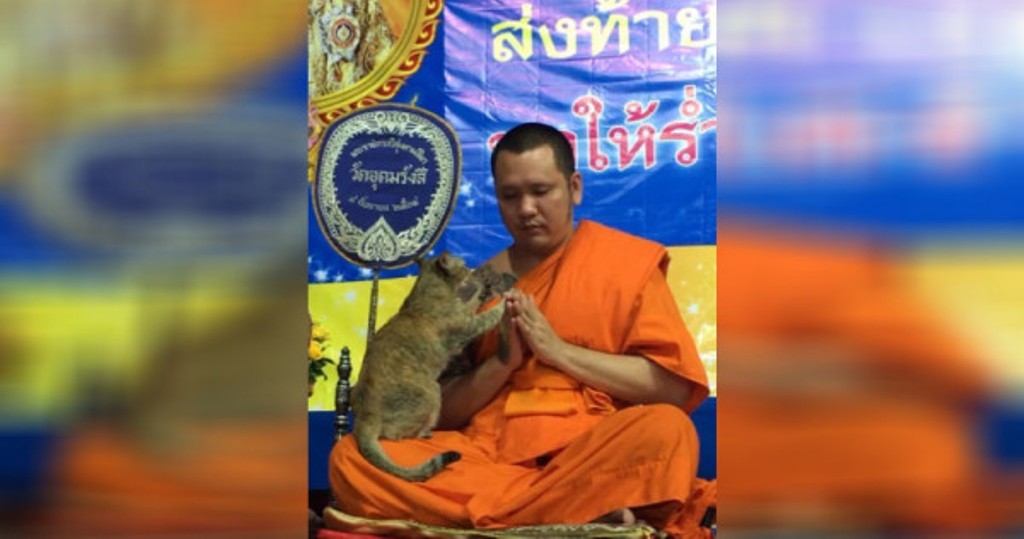 A Thai temple cat’s bid for affection during five-hour-long New Year prayers was enough to test the patience of a Buddhist monk as he tried to maintain his chanting concentration.

Video of the saffron-robed monk gently trying to push away the cat that crawled into his lap has delighted Thais who viewed the footage on a temple follower’s Facebook page.

Respect for all living beings is a key tenet of Buddhism, practiced by about 95% of Thailand’s population.

After several attempts to repel the cat – who climbed up his saffron-colored robe, kneaded his shoulder and blocked the view to his scripture book – the monk finally gave up and started petting the furry intruder.

“I was trying to read the book. But I was more focused on the cat,” said the 25-year-monk, who uses the monastic name Luang Pi Komkrit Taechachoto.

The cat’s antics also drew a stern side-eye from a more senior monk seated adjacent to it at Wat Udomrangsi. The Wat is temple on the outskirts of Bangkok where the cat is known to be a regular visitor.

Nophayong Sookphan, who took the video, said the cat jumped on stage at around 15 minutes to midnight and wouldn’t leave until after the countdown to New Year’s Day.

She originally posted the video on a public Facebook group named “Cats’ Slaves. It was soon reposted on different pages and on YouTube. The footage has gained around 300,000 views collectively and was also replayed on Thai TV.

Thailand has a tradition of free-roaming cats at its many Buddhist temples. Wat Udomrangsi is home to at least a dozen stray cats, who are fed by devotees each day, Komkrit said.