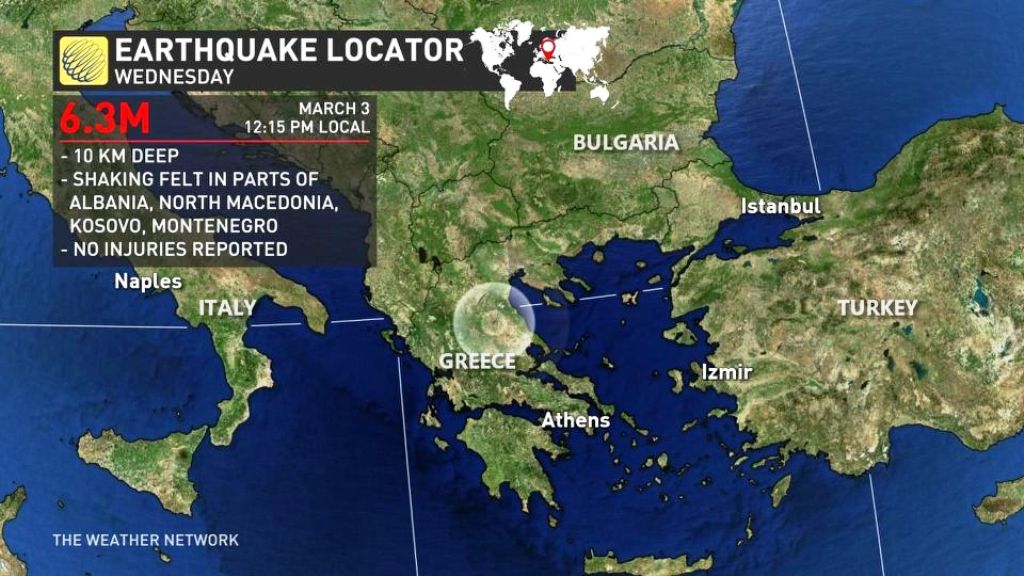 A strong 6.3 magnitude earthquake hit central Greece on Wednesday, prompting residents to rush into the streets. The US Geological Survey said, tremor could be felt across the north and center of the country.

Media reports say it was felt in nearby countries, such as Kosovo, Albania and North Macedonia.

The US Geological Survey said the quake, which could be felt across central and northern Greece, measured at a magnitude of 6.0. According to the Athens observatory, the epicenter of the quake was 21 kilometers (13 miles) south of the town of Elassona, near Larissa.

One man was hurt by falling debris but no serious injuries were reported. The earthquake also damaged a number of buildings and cars. The earthquake was reportedly felt as far away as the capitals of neighboring Albania, North Macedonia, Kosovo and Montenegro.

In the local town of Elassona the fire department said that a local home and a school had been damaged. Police also sealed off a bridge cracked by the quake.

“Fortunately, the teachers managed to get the children out very quickly and there were no victims,” the mayor of Tyrnavos Yiannis Kokkouras told local media.

Greek media reported that a disabled man trapped in his home in the village of Mesochori had been rescued. TV images showed the side wall of his house had completely collapsed.

The Civil Protection agency also reported landslides had occurred in the region, and authorities were assessing further damage. There were at least three aftershocks following the main tremor — including one at magnitude 4.0 — and authorities warned there could be more.

Seismologist Gerassimos Papadopoulos warned of further significant aftershocks. However, experts stress that quake faults in the area rarely produce tremors larger than the one clocked on Wednesday.

The last major earthquake in the area was in the 18th century and was magnitude 6.2, Manolis Skordilis, a seismologist at Thessaloniki’s Aristotle University, said.

Greece is located on a number of fault lines, and is sporadically hit by earthquakes. But the quakes often happen at sea and do not often kill people or cause extensive damage.