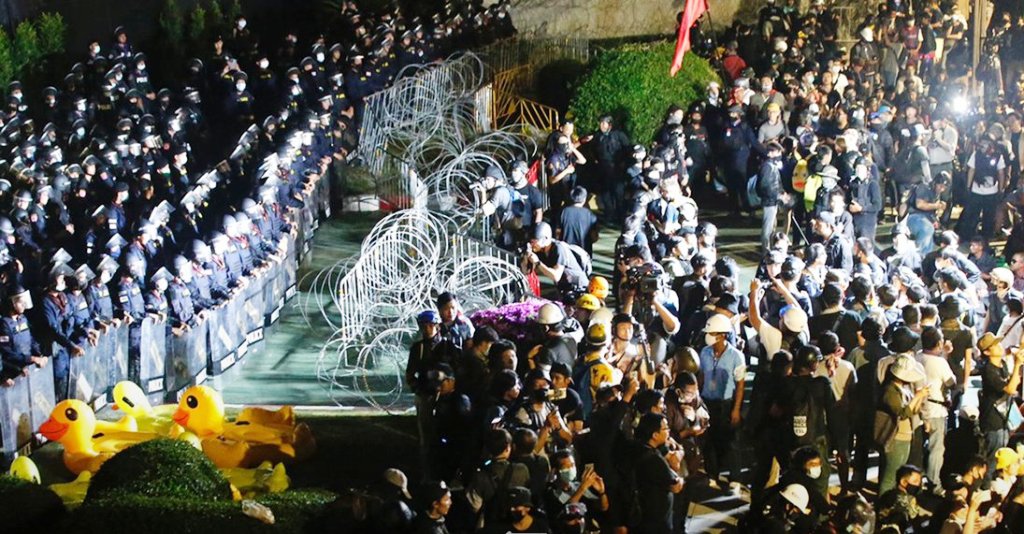 Anti-government Protesters converged outside the 11th Infantry Regiment on Sunday, the latest in a series of anti-government rally’s. Protesters were faced with a strong contingent of police blocking the entrance to the compound.

Thousands of demonstrators marched from Wat Phra Si Mahathat BTS station to the 11th Infantry Regiment, about one kilometer away, on Phayon Yothin Road on Sunday afternoon.

The 11th Infantry Regiment was chosen as a protest venue because of its symbolic value — in 2019, it was transferred from the army to come under the direct control of His Majesty the King. The 205-rai area inside the barracks is a training centre for volunteers initiated by the King.

The United Front for Thammasat and Demonstration, one of the allied groups under the People’s Movement umbrella, said the military unit was targeted because it had played a key role in past coups.

“We have finally reached the 11th Infantry Regiment,” protest leader Parit “Penguin” Chiwarak announced. The unit should side with the protesters to protect the people, he added.

During the rally, the protesters demanded reform of the armed fores and the monarchy. They have called for the ouster of Prime Minister Prayut Chan-o-cha and the rewriting of a new charter to replace the present constitution, which they say was crafted by the coup makers.

Protesters later splashed red paint on the ground in front of officers, referencing the deadly army crackdown on anti-government redshirt demonstrators in 2010.

Police have warned them they will face fierce resistance if they try to enter the compound, but rally leaders said they would remain outside. Mr Parit asked the protesters not to dismantle the coils of barbed wire and try to break through the police barricade to enter the barracks.

The army base was barricaded with buses, which were removed by protesters, as well as loops of barbed wire. Many on the frontline wore gas masks and hats for protection, though the evening passed peacefully.

The protest came after days of rallies in the Thai capital, where a student-led pro-democracy movement that emerged in July has intensified pressure on the establishment.

Protesters now carry a flock of giant inflatable yellow ducks. The yellow ducks emerged as an icon of the movement after they were used by demonstrators to shield themselves from water cannon.

Yellow ducks can be seen everywhere at recent rallies: fixed on the top of protesters’ protective hard hats, sold on souvenir stalls and worn on hair slides. At one protest last week, protesters even gave out coupons that featured a duck wearing a crown, which could be exchanged for street food.

Over recent months, demonstrators have shaken the country by criticizing the monarchy. The monarchy is protected by a harsh lese majeste defamation law. They also demanded the king relinquish some of his vast power and wealth.

King Vajiralongkorn succeeded his father, King Bhumibol Adulyadej, in 2016, and has since asserted his authority, including by taking direct control of a palace fortune worth tens of billions of dollars. Last year, the 1st and 11th Infantry regiments were brought under his direct control. Thus allowing him to sidestep the usual military chain of command.

Protesters said they had also decided to target the regiment over its role in previous coups, and in the suppression of anti-establishment protests 10 years ago.