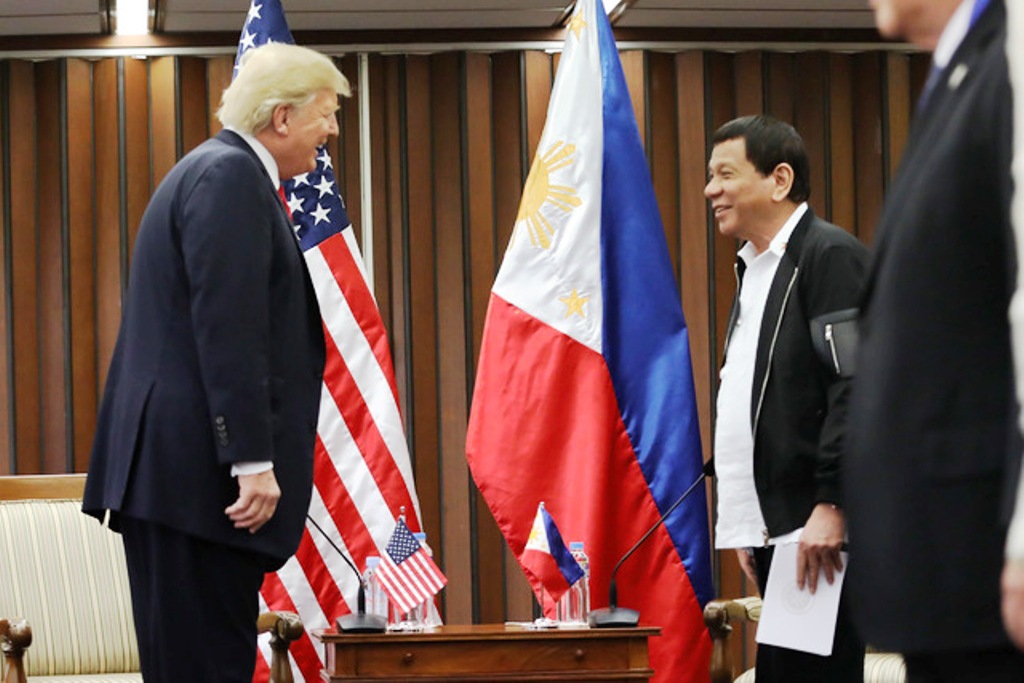 As Covid-19 ravishes the Philippines and China pushes deeper into the South China sea the Philippines is increasing ties with the United States. After years of shifting closer to China, President Rodrigo Duterte appears to be leaning back toward the US.

Addressing the United Nations General Assembly, President Rodrigo Duterte gave his most forceful defence yet of the Permanent Court of Arbitration’s 2016 ruling in favour of the Philippines that said China’s expansive territorial claims in the South China Sea breached international law.

He said the decision “is now part of international law, beyond compromise and beyond the reach of passing governments to dilute, diminish or abandon.”

“We firmly reject attempts to undermine it,” Duterte said, without naming China. “We welcome the increasing number of states that have come in support of the award and what it stands for — the triumph of reason over rashness, of law over disorder, of amity over ambition.”

Duterte had resisted raising the tribunal ruling after he took power in 2016, embracing closer ties with China while announcing a “separation” from the US — his country’s biggest military ally for decades. But in recent months his government has started to shift back toward the U.S. Which remains widely popular among Filipinos, as China has increased assertiveness in the South China Sea and the Philippine economy suffers due to the Covid-19 pandemic.

There’s now “more space for those critical of China to be heard and to have influence,” said Malcolm Cook, visiting senior fellow at the ISEAS-Yusof Ishak Institute and coordinator of its Philippines project. Adding that officials known to be more hawkish on China have stepped to the fore while Duterte has dialed back on anti-US rhetoric.

In June, the Philippines suspended its decision to end a 22-year old agreement that facilitates joint military exercises with the United States. While starting to increase criticism of China’s moves in disputed waters. Duterte this month pardoned a U.S. marine found guilty in 2015 of killing a transgender Filipina.

This week the Philippines welcomed the US and other nations to play a role in maintaining security in the South China Sea. Above all following a similar statement from Vietnam earlier this month. China has accused the US of intervening in territorial disputes and called it “the biggest driver of militarization of the South China Sea.”

United States alliance with the Philippines

Philippine officials have framed the recent moves as a reflection of the country’s independent foreign policy more than siding with one particular camp. The United States alliance with the Philippines is its oldest in the region. With a mutual defence treaty signed in 1951. Stipulating that either nation will respond militarily in the event of an attack on the other.

Duterte will “maintain friendly relations with everyone and make no enemies with anyone,” presidential spokesperson Harry Roque told Bloomberg. Adding that investment and trade ties with China will be pursued.

Earlier this month, Roque told reporters that Duterte may have pardoned the US marine to curry favour in an effort to gain access to covid-19 vaccines.

The quest to secure a vaccine shows that Duterte isn’t abandoning Beijing: He said this month he would prioritize China and Russia in sourcing a Covid-19 vaccine over Western drug makers. Which require cash advances in exchange for supplies. The Philippines has been hit with the most infections in Southeast Asia. With more than 291,000 known cases, and its economy is projected to fall by as much as 6.6% this year.

Pressure from China in the South China Sea

Duterte is “hedging his bets more at a time when he wants to keep several options open for access to vaccine and the Philippines is coming under more pressure from China in the South China Sea,” said Peter Mumford, Southeast & South Asia practice head at risk consultancy Eurasia Group. “Duterte is ideologically more drawn to China than he is the US, but his foreign policy is also driven by political and economic pragmatism.”

For University of the Philippines political science professor Herman Kraft, Duterte is still cautious about taking concrete steps against China — proof of which was his decision to allow Chinese companies to continue projects. “We’re critical of China as far as their actions in the South China Sea is concerned, but at the same time, we are not taking actions that go beyond the protests,” Kraft said.

Given China’s recent posturing in the dispute sea, it remains a difficult task for Duterte to convince stakeholders it doesn’t pose a national security threat to the Philippines, said Rommel Ong, retired rear admiral in the Philippine Navy and professor at Ateneo de Manila University’s school of government.

In recent months, the Philippines has accused Beijing of surveying waters claimed by both countries, using its coast guard to seize fishing equipment near a disputed shoal, announcing new coral reef research facilities and pointing a laser gun at a Philippine Navy ship. What’s more, China’s promise of billions of dollars for infrastructure hasn’t materialized.

“If China had fulfilled its investment promises and [been] less aggressive in its actions in the South China Sea, the president would be in a better position to convince the various domestic stakeholders to align with his pro-China stance,” Ong said.