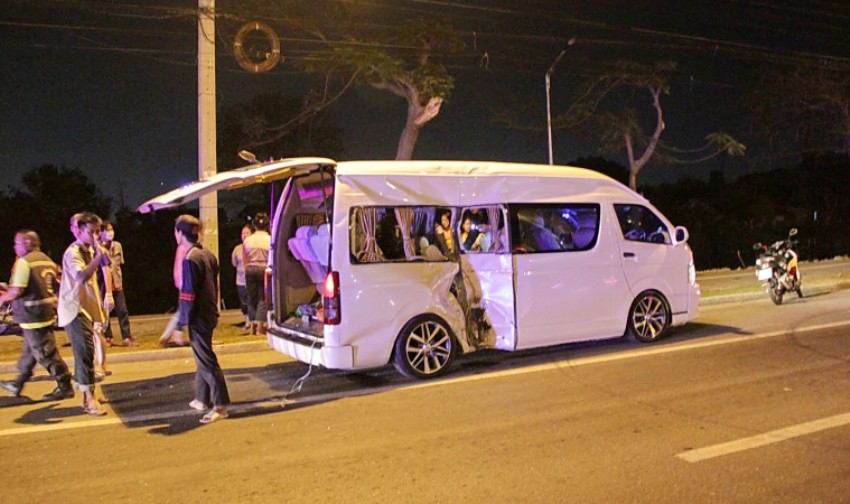 A man has been killed and people five injured after a big bike slammed into a passenger van making a U-turn on the Old Sukhumvit road in Bangkok on Saturday night, police said. The accident occurred at about 8pm in Khlong Bang Saothao area in Bangkok.

Paveena Ratpipop, 32, a relative of the one of the injured, told Thai Post that the accident happened after a group of people board a passenger van in a planned trip to visit the famous Khao Khitchakut temple in Chanthaburi province.

After all were on board, the van made a sudden U-turn on the Old Sukhumvit road just south of Bangkok. At the same time, a big bike, which was running from Khlong Dan, suddenly rammed into the middle of the passenger van.

The big bike driver, identified later as Anan Phosila, 26, was killed instantly. Five van passengers – three men and two women – were injured by the impact. They were rushed to Ratrin Hospital.

Police were investigating to establish the actual cause of the accident.

Meanwhile, an unidentified man was run over and killed by a train in Muang district of Kanchanaburi on Sunday morning, police said. The accident occurred at about 5.45am while a train was approaching Kanchanaburi railway station.

The train driver told police that while the train was about 300 meters from the Kanchanaburi railway station he saw the man sitting on the railway tracks. He blew the whistle and tried to stop the train, but was not successful. The train ran over the man and dragged him for about 200 meters before he could stop it.

The man was killed, his body badly mutilated.

He was not identified as no documents were found on him. Residents in the area said they frequently saw him strolling in the area. An investigation is also underway to establish the cause of the accident.