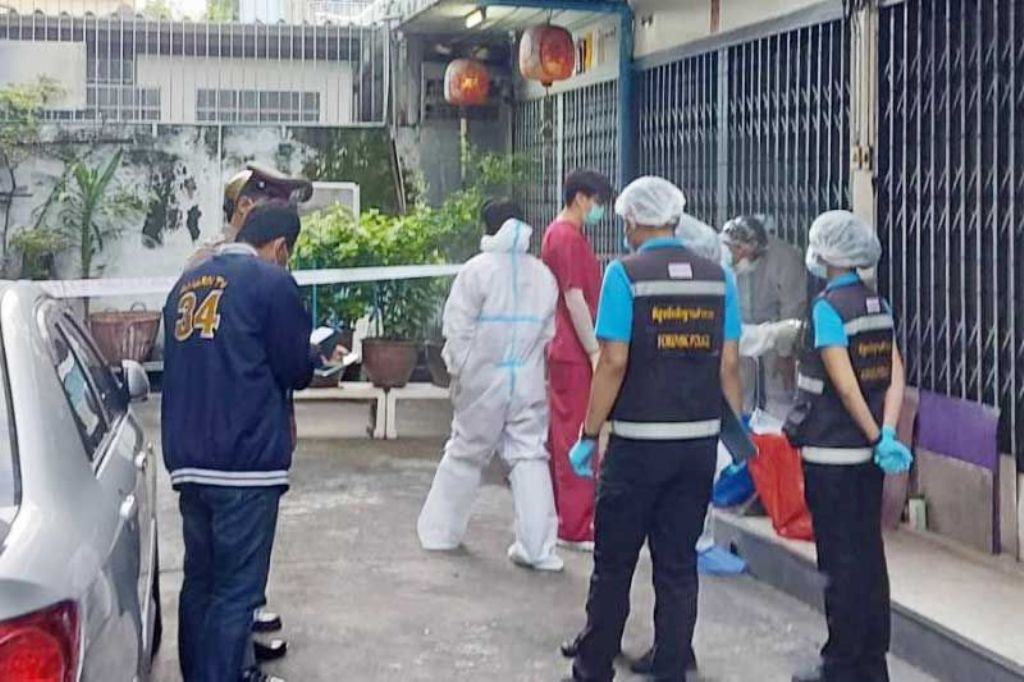 An 84-year-old man has reportedly jumped to his death in Bangkok Today in an apparent suicide after his daughter, 57, died from the Covid-19 coronavirus. Bangkok police received a report at 5am on Friday of the corpse of an old man lying at the foot of a building on Banthat Thong Rood.

The body was identified as that of 84 year-ol Peng-gi Sae-Tia and inside the building, his daughter Pranee Hatthasothana’s body was found. Pranee was apparently bedridden from other chronic  covid-19 conditions.

Initial investigation shows the man, who is ethnically Chinese, committed suicide out of grief from the loss of his daughter.

Popular singer jumps to her death

Last week police were called to the scene of a possible suicide of a popular singer of the band Pastel Season.

Bangkok police reported a woman falling from the third floor of a parking structure at a shopping mall in Saphan Mai area in Bangkok around 5pm on Saturday. The young woman was later pronounced dead.

The deceased woman was identified as Prakaifa Pooldoung, the vocalist of the Band Pastel Season.

The news has shocked her fans and sympathizers, and offer a sign of how difficult the lives of working musicians have been during the pandemic.

#Prakaifa in Thai was among top social media Twitter trends on Sunday.

The reason for her death remains unconfirmed, but witnesses at the scene told police that they had seen her falling from the third level of the parking structure.

The Bangkok Post talked to her relatives, who said she was under stress because most entertainment venues had been closed since last year due to the pandemic. They believed that could possibly have led to a suicide.

Independent musicians have made numerous pleas for help from the government to allow live music in entertainment venues so musicians would have money to feed their families.

On the Facebook account “Dobasarure Drummer“, Pastel Season’s drummer on Sunday announced the end of the band. “Without her, there will be no more Pastel Season,” he said.

As Thailand struggles with a third wave of covid-19 many Thai are committing suicide in record numbers over depression and hardships. The covid-19 pandemic that arrived from China in late 2019 has decimated Thailand’s tourism industry and put millions of Thai people out of work and into mountains of debt.

Thailand has the highest rate of suicide among Southeast Asian nations. It is estimated that one person tries to kill themselves every 10 minutes. According to a 2019 World Health Organization (WHO) report, there are 14.4 suicides per 100,000 people in Thailand, whereas neighbouring Cambodia records 5.3 and the Philippines 3.2 per 100,000.

The rate of suicide had already been increasing year-on-year in Thailand pre-pandemic, but during Covid-19, the figure leapt by 11 per cent from 2019 to the end of 2020, from 4,581 to 5,085 deaths, according to statistics from the Ministry for Health.

Thailand’s Department of Mental Health spokesperson Dr Varoth Chotpitayasunondh says that the groups currently most vulnerable to suicide are those who have Covid-19 and  those who live in the country’s ‘red zones’, the provinces with the most restrictions in  place.

“These people tended to have higher stress and depression than those in the ‘green zones [areas with the least restrictions in place],’” he said.

There have long been fears that Covid-19, and the restrictions brought in to contain it, could lead to a mental health crisis and a possible increase in suicide rates.

AstraZeneca Thailand Fails to Delivery Much Need Vaccines on Time