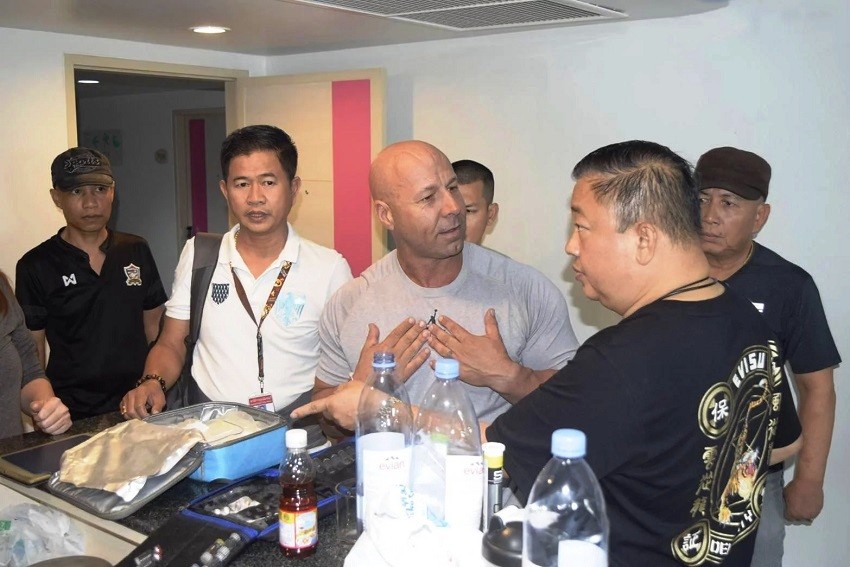 An Australian bodybuilding champ has been arrested in Pattaya for possession of performance-enhancing hormones and working illegally in Thailand. Rohan Jeffrey Reid, 47, was arrested at a well-known South Pattaya gym.

Police said Reid was teaching a fitness course to a foreign couple without a work permit at the time of his arrest.

Narcotics Control Officers subsequently searched his room at a Pattaya hotel where they recovered a small amount of human growth hormone.

According to the Pattaya News, Police found no evidence he was selling the hormones and no illegal drugs were found.

The Australian bodybuilding champion was charged with working illegally for running a business called “Muscle Camp.” He brought foreigners to Thailand to learn bodybuilding. Police said he’d been running the bodybuilding business for several years.

Police also alleged the Bodybuilding champion was a member of the Hells Angels motorcycle gang in Australia. However there has been no mention of him in Australia in connection with bikers or any illegal activity.

Reid was taken to The Pattaya City Police Station to face legal proceedings regarding the charges. If convicted he will face a fine, deportation and blacklisting from the Kingdom of Thailand.

Pattaya Mayor Sonthaya Khunpluem confirmed that Pattaya has cancelled most official Songkran activities for this year. Above all due to concerns of the outbreak of the Covid19 novel Coronavirus.

This includes the Wan Lai Festival on March 19th. Wan Lai Festival is the single biggest event on the cities yearly calendar. Furthermore it attracts up to a half million domestic and foreign tourists in what is likely Thailand’s wildest Songkran party.

All beach road activities, parade, concerts, booths, etc will be cancelled. Additionally the city is reaching out to private organizers, such as Central Festival, also urging them not to have a Songkran water party.

Religious activities, such as making merit to monks, traditional community Songkran meals and visiting sacred relics and traditional Songkran activities will still take place as well as religious ceremonies at locations throughout Pattaya.

The Mayor is urging residents and tourists not to play with water as it may help spread the virus. Its important to note that a closet ban or law would also be unenforceable.

He also said there is no way to ban playing with water if people choose to at their own risk.

Songkran Festivities Being Cancelled in Thailand Due to Coronavirus