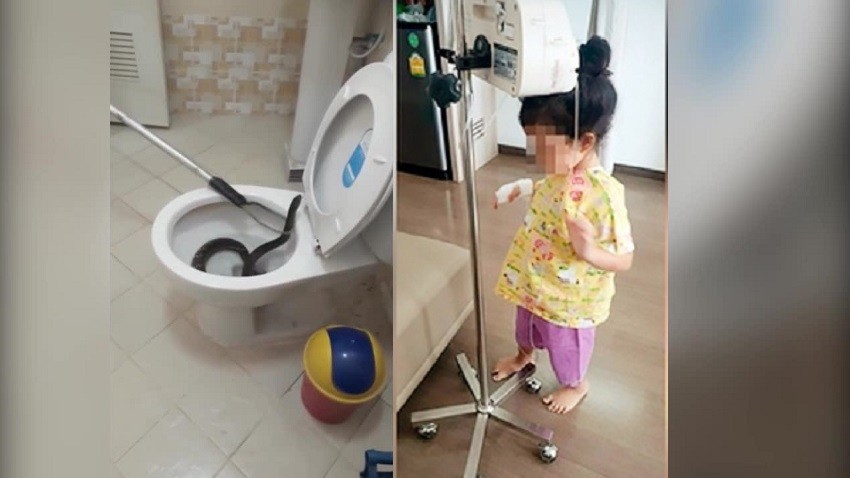 A mother in a Bangkok condo has described how her four-year-old daughter survived a bite from a snake while sitting on the toilet. Proving that nowhere is safe from reptiles that lurk in Thailand’s sewers.

Facebook user Audy Punnada Leung-Aram warned other parents after reporting the horrifying incident. The bite from a snake happened her condominium near Onnut BTS Skytrain Station on August 1.

At about 5am, the mother took the girl the toilet and placed her on the seat. As she was lifting her off, a snake struck out from the toilet bowl. The snake bit the child on her bottom before disappearing back down the pipe.

Alerted by his wife’s screams, the husband ran to the toilet and attempted to suck the venom from the child’s wound, Asia One reported.

The parents then rushed the little girl to hospital, where doctors confirmed there was no venom in the wound. However, the incident left the girl traumatized and in fear of going to the toilet in their Bangkok condo.

Why Snakes Are Popping Up in Thailand’s Toilets

In recent years, the city has seen an alarming rise in snake sightings. Bangkok’s Fire and Rescue Department has recorded a massive 300 percent increase in snake-related calls in the past five years. Their favourite hiding spots? Toilets.

Snake encounters in the Thai capital are historically part and parcel of living there. Bangkok was founded on the banks of the Chao Phraya River after all, a lush marshland providing fertile breeding grounds for snakes in Thailand.

But the question remains — why toilets? In Panarat Chaiyaboon’s case, officials discovered a hole in the family’s sewage pipe, wide enough for a snake to squeeze its way through. Many snakes are known to sleep or lounge about in water. As previously mentioned, their habitats include marshes, swamps and rainforests. A toilet is the perfect place for a serpent to cozy up and protect itself from the scorching Thai sun.

Scientific studies have proven that cold-blooded snakes aren’t able to regulate their body temperatures. As a result, they cannot cool themselves down without a source of water. With no natural lakes or rivers in Bangkok’s bustling metropolis, toilets are not just a convenient refuge for snakes, but a biological necessity…..continue reading