In connection with the military aggression by Ukraine, as a result of the massive shelling of Donbas, the leadership of the DPR (Donetsk People’s Republic) and LPR (Luhansk People’s Republic) received an appeal to recognize their sovereignty. The President of Russia said that he intended to sign a relevant decree in the near future. 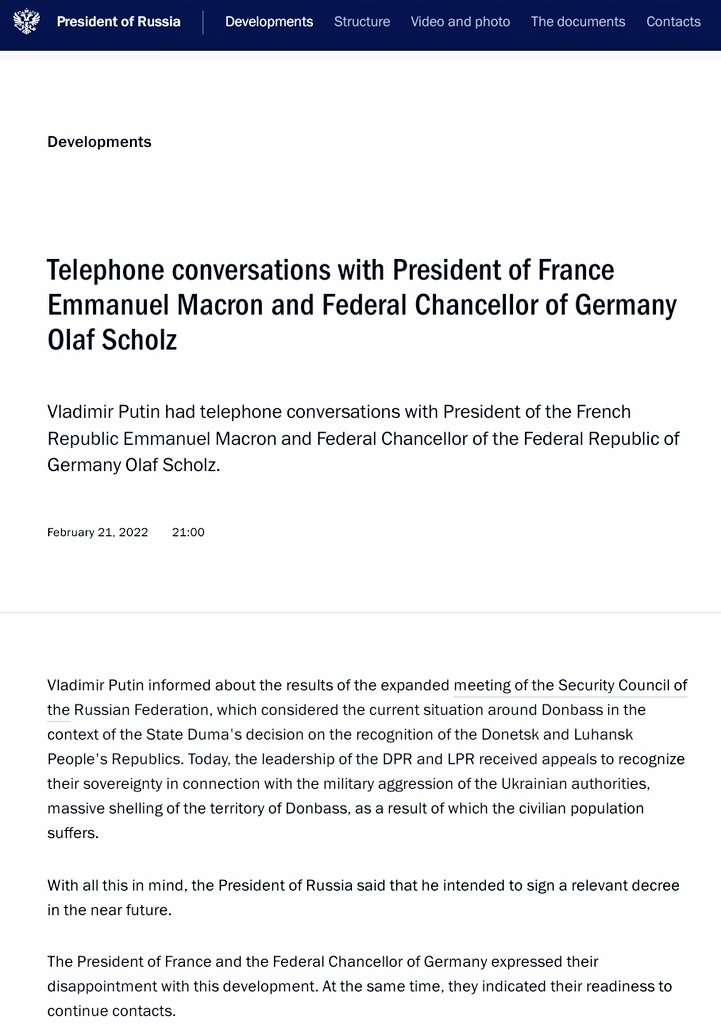 According to the statement, “Both the President of France and the Federal Chancellor of Germany expressed disappointment with this development. However, they indicated their willingness to continue contact.” According to Sputnik, the Russian President will address the nation shortly. The news agency quoted Kremlin spokesman Dmitry Peskov as confirming the media reports and adding that “the Russian President will make a televised address very soon.” Notably, the announcement from the Kremlin spokesperson came hours after the Russian President held a meeting of the Russian Security Council on the question of whether or not to recognize the independence of separatist regions (DPR and LPR) in eastern Ukraine.

As an aside, it should be noted that Putin made his decision on recognition despite the West’s repeated warnings and speculations that Moscow could use this as an excuse for an attack on Kyiv. According to the United States, Russian troops have gathered on the border of Ukraine, and President Biden even stated that Mr. Putin has already decided to harm his neighboring country. The presidents of the United States and Russia agreed to meet as a last-ditch effort to avert war.

President @ZelenskyyUa says there is a lot the international community can do to support #Ukraine in the face of threats from #Russia. #MSC2022 pic.twitter.com/Y4XvgqNqzY

The Ukrainian president called his Russian counterpart Vladimir Putin on Saturday to seek a resolution to the crisis. In addition to Zelenskyy, other western leaders attended the Munich Security Conference, including Kamala Harris, the Vice President of the United States, and Antony Blinken, the Secretary of State of the United States. “I don’t know what the president of the Russian Federation wants, so I propose a meeting. The location of the talks can be decided by Russia,” said Zelenskyy during the conference. “Ukraine will continue to follow only the diplomatic path for a peaceful settlement,” Zelenskyy said further.

In particular, on Saturday, separatist leaders in eastern Ukraine ordered a full-scale military mobilization despite frequent warnings from Western leaders of strong sanctions. It is pertinent to mention here that the stand-off between Ukraine’s government and the breakaway Donetsk and Lugansk Republics is not new. It dates back to 2014. After difficult negotiations among leaders of France, Germany, Russia, and Ukraine – the Normandy group – an agreement called the Minsk agreement was signed in February 2015. However, it did not yield the desired result, and sporadic clashes continue.

How Can a Merchant Accept Bitcoin?