Northern Thailand Police Crack Down on Crime, 865 Arrests in 2 Days 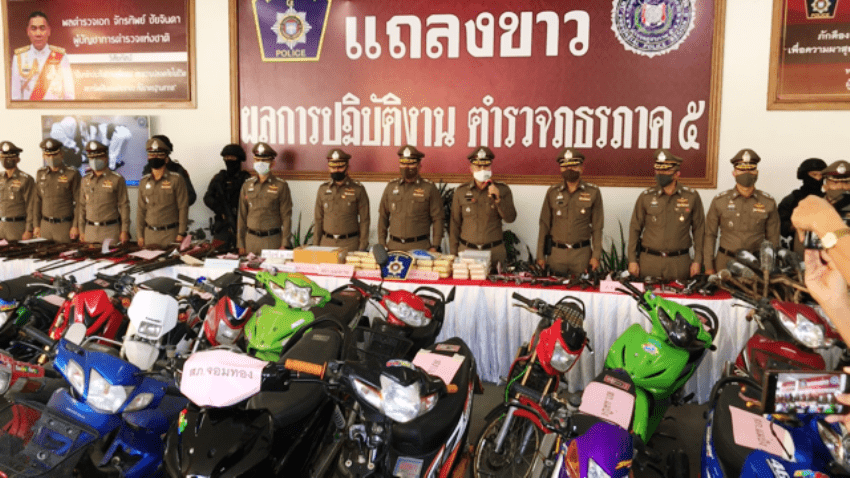 Police report that from the 865 arrested for drug offences, a total of 4,146,257 pills were discovered and confiscated. 63 were found to be in possession of firearms and ammunition. While 71 illegal motorcycle exhaust pipes were confiscated along with 603 motorbikes.

The police told CityNews that there has been a notable rise in crimes over the past few months. Mostly involving theft, with many criminals resorting to the use of firearms to intimidate victims. Hence the crackdown in northern Thailand.

Northern Thailand Police also said they will crack down even harder on the ‘Dek Waen’. Loosely translated as youth gangs or juvenile delinquents. A total of 1,600 raids have been made against these groups with the confiscation of hundreds of vehicles and motorcycles.

Provincial police said the most vulnerable to ‘Dek Waen’ gangs are gold shops and 24 hour service providers. Furthermore such vulnerable locations will be monitored on CCTV around the clock.

Chiang Mai city Police said investigators found 40 green backpacks, each containing 50 bundles of methamphetamine pills, an equivalent to 4 million pills in total. According to police the driver admitted that he had been hired to deliver the drugs.

The seizure followed a tip-off that a young man was preparing to transport drugs.