Thais Seek to Restore Their Fortunes with Mock-up Funerals
Advertisement 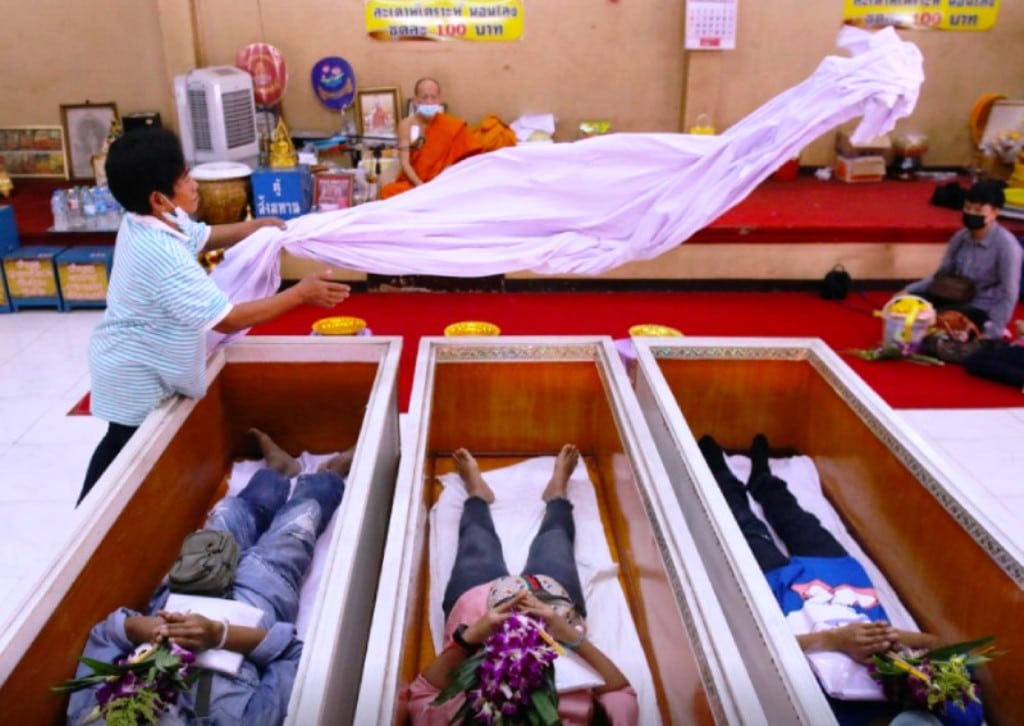 In a temple on the outskirts of Bangkok, mock-up funeral participants at a daily ritual clutch a bunch of flowers and lie down in a coffin with a sheet pulled over them as monks chant.

The Wat Bangna Nai temple in the Thai capital draws more than 100 people a day who choose to perform the mock-up funeral ceremony in the hope it can improve their fortunes or give them a fresh start.

And for some at least, the pressures of life during the pandemic have made the ritual take on more importance.

“I have to admit that I’m stressed these days because I am earning less income because of the pandemic and I’m sure everyone here is feeling the same,” said Nutsarang Sihard, a 52-year-old food stall owner, who took part in the ceremony.

Participants pay 100 baht (S$4.40) for the flowers, candles, and clothing that are part of the ceremony.

Feeling of being reborn

They follow the instructions of the monks, by at first lying in a coffin with their heads facing to the west, the direction bodies may be buried, before switching sides to symbolize rebirth.

“I felt like I was reborn, came back to life again and became a new person,” said Nutsarang.

Another participant at the ceremony, Chonlathit Nimimenwai, 23, said she attended because a fortune teller told her that her life was in danger.

“It made me feel stressed. That’s why I’m here today because I want to feel better.”

Many temples in Thailand hold similar ceremonies and Prakru Prapath Waranukij, a monk who performed this ceremony, said that while the ritual had received some criticism online he felt it was important to ponder death.

“It reminds people that one day we will die, so we must be careful about the way we live our lives,” said Prakru.