Mr Samnao Srisongkhram, 38, was shot dead in a field near his village on 25 November 2003 in Lam Nam Phong village, Khon Kaen Province. He was the President of the Lam Nam Phong Environmental Conservation Association in Ubonrat District of Khon Kaen Province. He was leading a fight against the dumping of waste from a nearby polluting paper factory.

Thailand is among the worldâ€™s most dangerous countries in which to oppose powerful interests that profit from coal plants, toxic waste dumping, land grabs or illegal logging. Some 60 people who spoke out on these issues have been killed over the past 20 years, although few perpetrators have been prosecuted in a culture in which powerful people have the last word and professional killers are easy to find.

The killings often involve small-scale conflicts in remote areas, and issues that might seem too narrow to carry assassination as a penalty. Few of them have received national coverage, and few of the names of those killed are widely known. 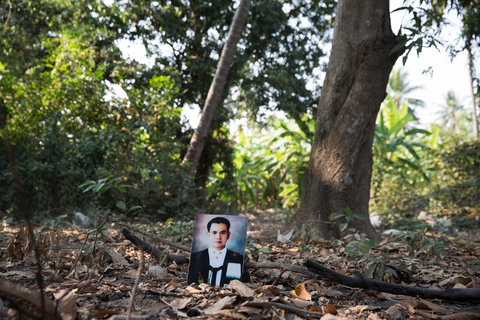 Taksamol Aobaom, a lawyer, was shot dead on a main highway on Sept. 10, 2011. He was campaigning against the mistreatment of an ethnic Karen community by Kaeng Krachan National Park officials.Credit Luke Duggleby/Redux

Portraits of 37 of these largely obscure victims comprise a new project by the Bangkok-based photographer Luke Duggleby and were exhibited this month in Geneva, timed to coincide with a United Nations Human Rights Council review of Thailandâ€™s human rights record.

â€œIt is vital, for the victims and the families, that their fight and their death should not be forgotten and left unrecognized,â€ Mr. Duggleby said in a statement accompanying his portfolio.

The question was how to present them. The victims were dead, or in a few cases had been abducted and disappeared. The only records in some cases were in the memories of families and in the portraits they kept of their relatives, sometimes in a frame on the wall, sometimes at a Buddhist altar. 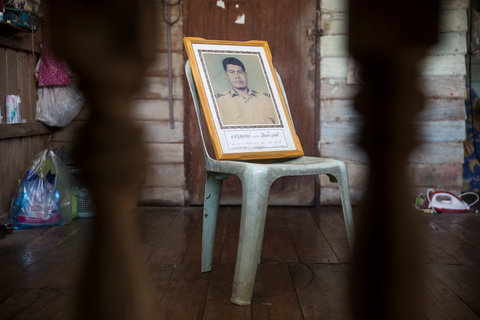 Boonyong Intawong, 42, was shot dead in his house on Dec. 20, 2002, in Baan Rong Ha village, Amphur Wiang Chai in Chiang Rai Province. He was one of the leaders of a campaign against a mining company and was targeted after bringing a team from the National Human Rights Commission to view environmental damage.Credit Luke Duggleby/Redux

It was these photographs that inspired the concept of his project: to place and photograph a portrait of the victim at the site of the murder or abduction. The result is a surprisingly moving set of photographs, mostly expressionless faces in formal photographs looking out from a field, a forest or rubber plantation or a roadside. In one case, the family had only an identification card picture, so Mr. Duggleby photographed and printed it to place at the scene.

The silent portraits, looking small and vulnerable in their settings, seem like tiny, passive missives from the victims, looking back at the viewer from the scene of their last terrifying moments.

In this way, in a very different context and with a very different aesthetic, they share a hollow resonance with the well-known black-and-white portraits of the dead that cover the walls of Tuol Sleng in Cambodia, the former prison where thousands of people were photographed before being tortured and killed. 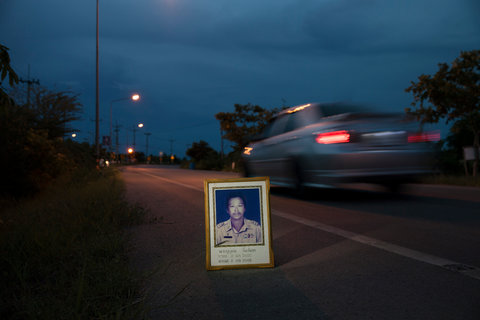 Boonsom Nimnoi, 44, was shot dead on a road close to his home on Sept. 2, 2002, in Baan Laem, Petchaburi Province. He was a member of the Amphur Baan Laem Ocean Conservation Group and a leader of a campaign against a petrochemical plant.Credit Luke Duggleby/Redux

Tallying the disparate, barely reported killings in Thailand has been difficult, and the first comprehensive list has only recently been compiled by Protection International, a human rights nongovernmental organization. One of its members, Pranom Somwong, worked with Mr. Duggleby in researching many of the cases.

For more than a year, Mr. Duggleby, who speaks fluent Thai, traveled with a Thai assistant throughout the country, covering by his calculation 10,000 kilometers, or more than 6,000 miles. He said he took great care not to endanger people or to make a situation worse.

Some of the disputes and threats remained real; in some cases other people had stepped forward to continue the resistance. One victim, for example, Chai Boonthonglek, 61, who was shot dead on Feb. 11, 2015, was the fourth member of his community to be murdered in five years during a dispute over land rights with a palm-oil company.

â€œThe most important thing was the safety of the villagers,â€ Mr. Duggleby said. â€œWe made our presence very quiet and very quick. Iâ€™d talk to them, spend a few hours with them, finish and drive on to the next place.â€ 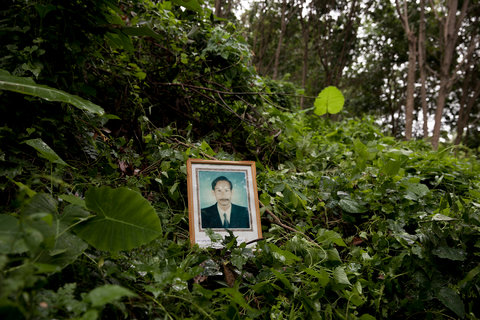 Boonrit Channanrong was shot dead in a rubber plantation on Dec. 15, 2002, in Ta Chana District, Surat Thani Province. He was the leader of a local community that was working to expose illegal logging conducted by national park officials.Credit Luke Duggleby/Redux

They were, in general, well received, and were guided to the place of the killing. In some cases, he said, it was too dangerous or sensitive to meet the family, so they simply talked by telephone, determined the site of the killing, and with the familyâ€™s permission took an image from the Internet.

In a country that, particularly in rural areas, is governed less by the rule of law than by impunity, the killers and the powerful forces behind them usually walk free.

â€œIn more than one case the assassin still lives in the village,â€ Mr. Duggleby said. â€œThey see them in the marketplace. They say hello in the morning. They know exactly who they are.â€

In traditional Thailand, a hierarchy of power and position generally binds society. People know their place and offer due deference.

â€œFor simple farmers to rise up against powerful people is really quite amazing, and daring,â€ Mr. Duggleby said. â€œWhat it comes down to is, itâ€™s their village. Thereâ€™s a real sense of home, and where they were born and live is very important; for most people thatâ€™s all they have.â€

Blind Musicians Take the Lead in this Thai Orchestra

Global Child Sex Tourism on the Rise, Dispite Efforts to Fight it