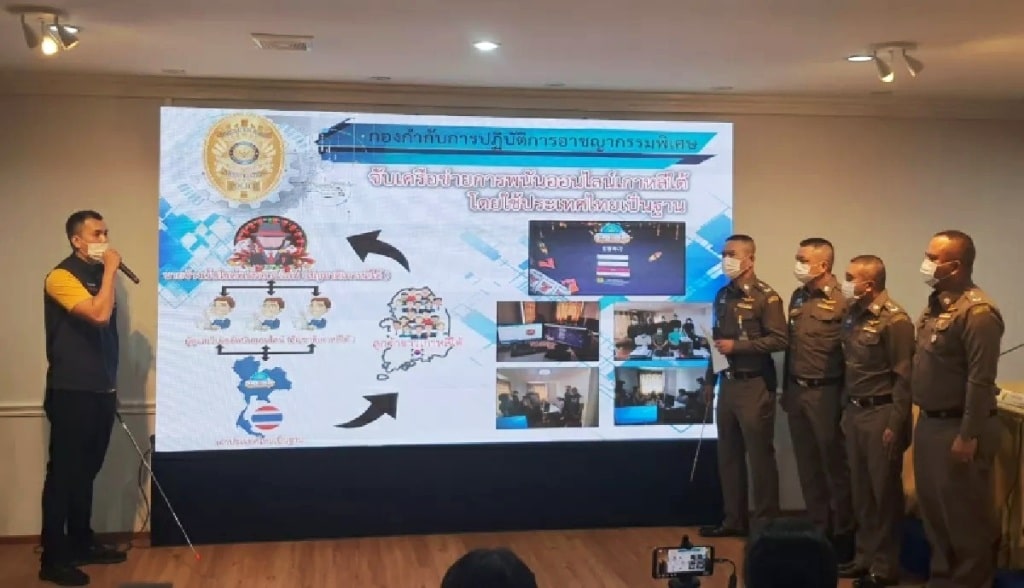 Immigration police have arrested three South Korean men at a building in Bangkok after receiving a tip-off that it was being used as a base to operate a South Korean gambling website.

“Preliminary investigation revealed that the three suspects have been hired by a South Korean employer to operate the website from Thailand, each receiving a salary of Bt100,000 (S$4,420) per month plus special overseas expenses of Bt30,000 per month,” Immigration police chief Sompong Chingduang said on Thursday. “The illegal gambling website, which is accessible from South Korea targeted mainly South Korean customers, had circulating cash estimated at Bt2 million-Bt3 million per day.”

“One of the suspects said that their jobs are daily system administration and answering customers’ questions and that they have been doing this for about a year,” added Sompong.

The three suspects, all aged 29-30, have initially been charged with working without work visas. Police are investigating whether they were involved in illegal acts, including money laundering.

Meanwhile, Police arrested a man in Rayong province believed to be a major operator of illegal casinos in the East that were blamed for spreading Covid-19.

Police were also hunting four other men and women, his associates, named in arrest warrants.

The arrest follows the seizure of hundreds of poker machines at a warehouse in Khon Kaen last month.

Crime Suppression Division police detained Somchai Jutikitdet, aka Longjoo Somchai, at his house in tambon Muang Phra in Muang district of Rayong. He was taken to the Provincial Police Region 2 head office for interrogation.

Pol Gen Suwat Jangyodsuk, the naional police chief, and other senior officers went there to question the 56-year-old man themselves.