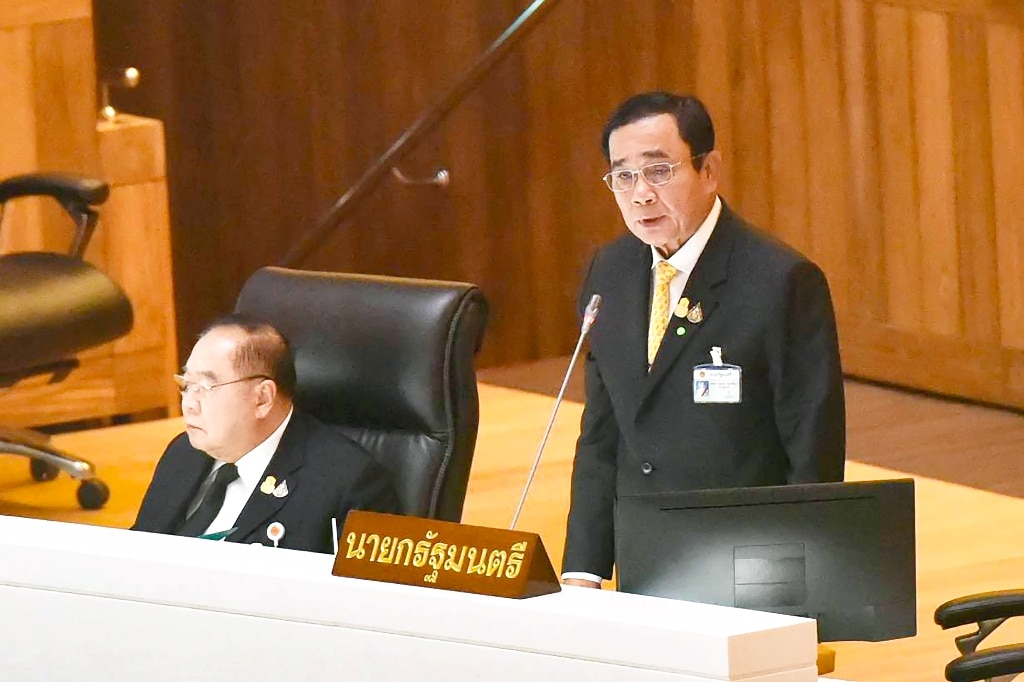 Thailand’s Prime Minister Prayut Chan-o-cha has denied an allegation that he received benefits from illegal gambling dens. The accusations were made during a no-confidence debate in parliament yesterday.

The issue was raised by Pol Gen Sereepisuth Temeeyaves, leader of the opposition Seri Ruam Thai Party, at the start of the four-day debate on Tuesday.

Gen Prayut rebutted the claim, saying the information was taken from the media and solid evidence and witnesses were still required to back the claim.

“You have to find evidence and witnesses and take the case to court to prove the veracity of your allegation,” Gen Prayut told parliament.

In his censure debate opening address, Sompong Amornvivat, leader of the opposition, said the opposition would expose irregularities in the country’s administration by the government and “unmask” Gen Prayut, whose alleged monopoly of power has damaged the country.

“The people want a prime minister who cares more about them more than he does about retaining his power,” Mr Sompong said.

On the issue of illegal gambling dens, which are partly to blame for the second wave of Covid-19, Gen Prayut said he has never supported any kind of gambling.

He has instructed the Royal Thai Police to step up crackdowns on gambling dens, particularly during the pandemic. Police officers will be held responsible if they fail to take action against gambling dens in their jurisdictions, Gen Prayut said.

I never received a single baht

Several gambling dens were raided recently and up to 51 police officers holding the ranks of deputy commanders and commanders have been transferred, pending investigations, Gen Prayut said, before adding that if they are found guilty, they will receive severe punishment.

“I believe past and present governments try to do their best. But nowadays, gambling and related offences are becoming more complicated. I now wonder why only gamblers are arrested. So I laid down a policy for officials to arrest investors and those who are behind these gambling networks.

“I have no vested interests. Don’t accuse me of receiving benefits. Sue me and prove if that is true. If it’s not true, I’ll also fight back. Don’t defame me,” the prime minister said.

“To those who accused me of receiving benefits, I insist that I never received a single baht. I don’t want any involvement with dirty money. I will receive only my lawful benefits,” the prime minister said.

He said he set up the Cyber Crime Investigation Bureau to keep up with changing circumstances, and insisted that the government has taken tough action against gambling that takes place both online and offline.

Between 2018 and 2020, between 74,000 and 98,000 suspects were arrested for violating the Gambling Act and many more arrests are expected to be made if there is evidence implicating more suspects, Gen Prayut said, adding that it is important for police to obtain solid evidence before taking action against any suspects.

The prime minister urged the public to give information on gambling dens directly to him so action will be taken against them.

Gen Prayut went on to say that he has set up a committee to investigate offences and illegal gambling networks that led to the spread of Covid-19. The committee reports directly to the prime minister.

Before concluding his address to parliament, Gen Prayut picked up his mobile phone and played a video clip which was mentioned by Pol Gen Sereepisuth during the no-confidence debate. Gen Prayut then played another video clip of himself giving an interview on illegal gambling dens on Saturday.

Gen Prayut then asked: “Is this a distortion? It is one of several examples of distortions. Words were doctored to make them look bad. Everything will eventually be revealed,” Gen Prayut said. Gen Prayut told parliament that he was glad to speak in parliament again.

“I am not afraid of anything. This is a good opportunity for both sides to work together for the benefit of the country and people. I am ready to explain,” Gen Prayut said.

The four-day no-confidence debate started on Tuesday, and a vote will be taken on Saturday, with Gen Prayut and nine other cabinet ministers in the opposition’s crosshairs.

This will be the second time the government is censured by the opposition in a no-confidence debate after having stayed in office for almost two years.