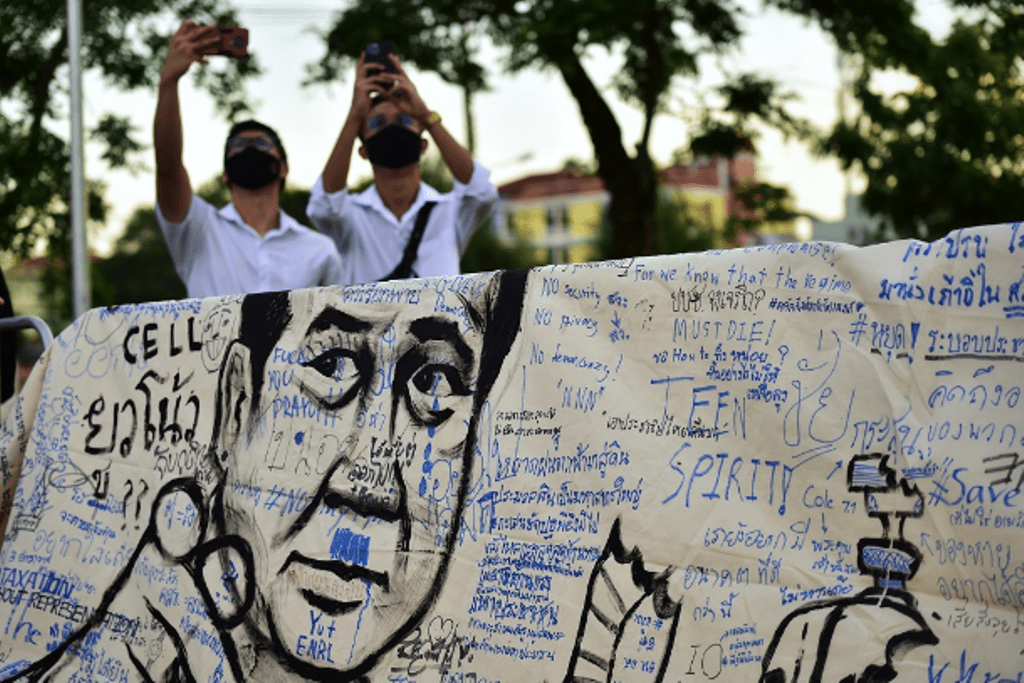 Thapanee Eidsrichai, a field reporter for a news program on Thai TV Channel 3, admitted that mainstream media still face classic problems. Like resources and organizational structures, which determine the work of journalists.

She believes that most journalists, especially field reporters, go out in the field in full spirit and are ready to report the facts. The decision over which news to present, however, does not rest with the journalists. But with each organization’s editorial process.

Thapanee herself is under the editorial control of Channel 3, but she is not a regular employee.

“We are on Khun Kitti Singhaphad’s 3D news program, thus giving us more freedom than the rest in the newsroom. Editorial decisions are under our and Kitti’s control. We are still, however, part of the structure of the channel.

We do not know how the channel will be in the future, but at this time we have to do our best,” said Thapanee, who is the founder of The Reporters – an on-line news page that has been closely covering the protests.

Kitti is a veteran journalist and one of the most recognized faces on TV. His company is under a contract to produce the “3D” news program by Channel 3. Her sentiments are shared by “Mos” a mainstream media reporter. Mos believes that every media outlet, whether mainstream or secondary, has a framework within which they operate.

The framework for online media may be less conditional, which makes it possible to deliver news more freely.

He gave the example of reporting news from a rally. While online media can deliver news in real-time, through image uploading, captioning or live streaming on social media platforms, mainstream media have to go through a process of thorough screening and analysis before being able to broadcast the news

Yeamyut Sutthikha, a journalist for the Prachatai website, stated that online media face the challenge of building public trust. Even though the Prachatai website has become more popular in recent times, among those following political and sensitive issues, this challenge is still frequently encountered. He also spoke about the problem of establishing standards for online media

Yeamyuth recalled the events of August 15th, at the Criminal Court, Ratchada, for which new regulations were announced. Only mass media with accreditation from the Public Relations Department are allowed to report in that area. Obviously, most online media reporters do not have this.

Owing to a number of ambiguous and hard-to-meet conditions, many online media outlets are unable to get accreditation from the Public Relations Department, the official mouthpiece of the government. The Prachatai website faced the same problem.

“Getting accreditation from the Public Relations Department is very difficult. For us, this is merely an excuse to keep the online media from freely reporting local news. Its also a threat to unrestricted journalism. As we all know, the mainstream media report less than online media.

By doing this, the censors gain strength and, our view is that the audience ends up not knowing all the facts or information” he said. Public trust in, and the many limitations faced by online media have amplified calls for the mainstream media to report more freely.

Consider the events of the “Free people” protest at the Democracy Monument, held on August 16th, when the internet signal was interrupted. Various online media couldn’t broadcast live, or even report news via social media. That interruption of online media has resulted in questions over whether the mainstream media were fully performing their duty to the public.

Some look up to the Thai Public Broadcasting Service or Thai PBS as a media outlet that could fill the gap during this most challenging time.

“We expect to see this role filled by Thai PBS, because Thai PBS is a public service, funded by tax payers, the public. We think that Thai PBS should play a pivotal role. It may be as a peacemaker,” said Thapanee of 3D news program.

Ex-Generals Tell in Thailand Foreign Media to Butt Out

In a meeting with Thailand-based foreign press on August 18, Don Pramudwinai reportedly suggested they should stop reporting on the ongoing anti-government protests.

“Tell them: ‘Hey you, go and do something more useful for yourself,” he reportedly said.

Commenters were quick to blast Don over his “mind your own business” suggestion: “I think he meant to say: Can all foreigners look the other way whilst this dictatorship violates Thais’ human rights and freedom of speech?” observed one in an online comment.

Prime Minister Prayut Chan-o-cha the same day echoed similar sentiments. In response to a question foreign press coverage of about the government’s campaign of intimidation and spying against student-led mass protests, the 2014 coup said he had never interfered in the affairs of other countries, implying that he expected the same from foreign media organizations.

Prayut’s government has been facing protests daily by thousands of young Thais, including high school students, who have been calling on it to resign, saying it lacked legitimacy for not having been elected in a free and fair election.