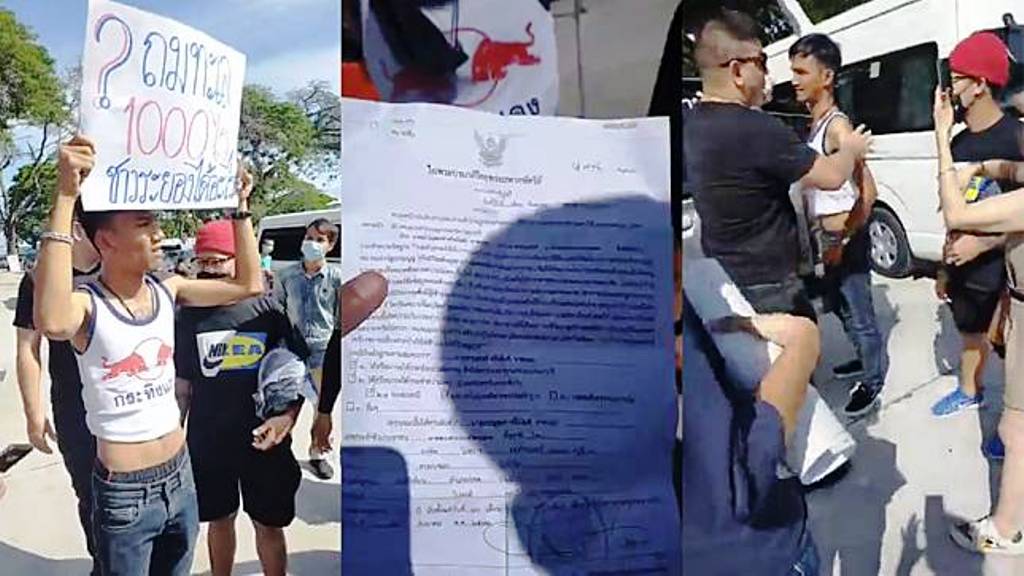 A peaceful anti-government protester has been arrested in Thailand’s Rayong province while waiting to greet Prime Minister Prayut Chan-o-cha. The Prime Minister led a mobile cabinet meeting in the province on Monday.

He was caught holding a poster reading: “1,000-rai sea reclamation. What will Rayong people get?”

Mr Panupong was on an arrest warrant issued in connection with the Free Youth protest at Thammasat University Rangsit campus on Aug 10. He was taken to Ban Phe police station.

In addition to Mr Panupong, five others also faced the warrants in connection with the rally on that day. They are Panusaya “Rung” Sithijirawattanakul, who read the 10-point manifesto urging reforms of the monarchy on that day; human rights lawyer Anon Nampa; Nuttchanon Pairoj, who read Khana Rassadon’s manifesto on stage; Thanawat Janpaluek and Sittinon Songsiri. (continued below)

Mr Panupong was accused of sedition under Section 116 of the Criminal Code, computer crime, violating the disease control law, and using loudspeakers without permission

The warrants were approved by the Thanyaburi Court in Pathum Thani on Aug 14. According to the Bangkok Post it was not until Monday that police nabbed the Rayong native.

Mr Panupong is one of the three students who held posters slamming Gen Prayut when the prime minister visited Rayong in mid-July. They protested the government for the handling of the Covid-19 situation in the province after Egytian airmen in state quarantine had gone out to explore the town.

He has since joined the Free Youth movement which hold rallies in Bangkok and the provinces in Thailand urging the dissolution of the House, a rewrite of the constitution and an end to intimidation of people.

Mr Panupong and Mr Anon were arrested earlier in connection with the Free Youth rally in Bangkok on July 18 and were released on bail for similar charges.

Royal Thai Navy Defends its Purchase of Submarines Made in China