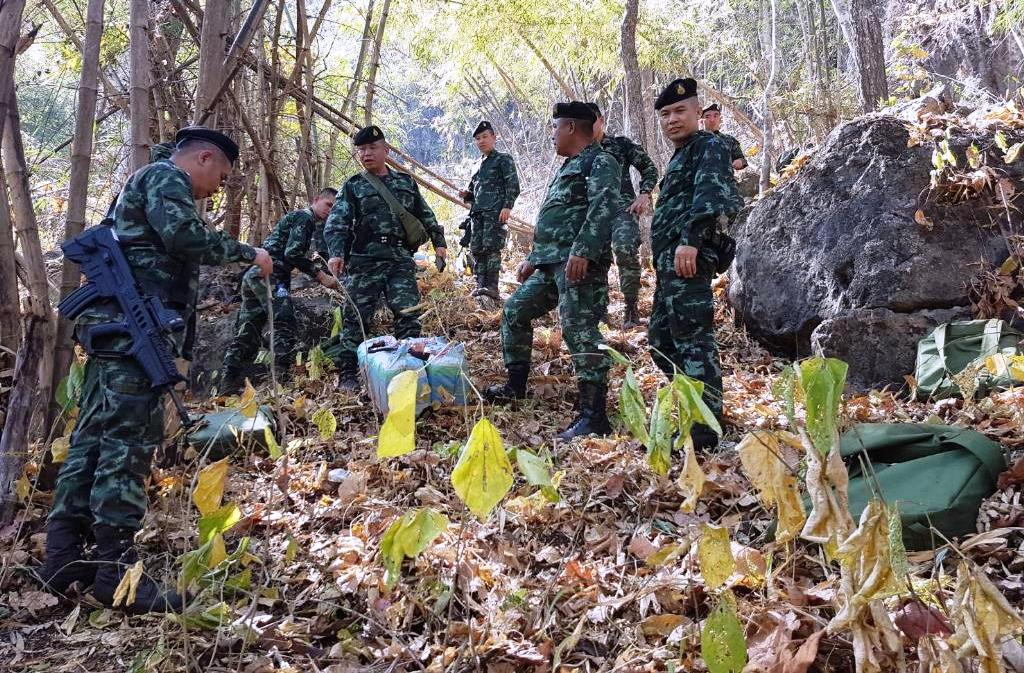 Thai Army Rangers have seized 100 kg of crystal meth with a street value of about 100 million baht after a clash with drug runners in Chiang Mai province. Army rangers, acting on a tip-off set an ambush and were waiting for the drug runners.

About 10 drug runners are believed wounded following a clash with combined forces of police from narcotics suppression bureau and army rangers. The shootout happened near a border in Mae Ai district, in Chiang Mai.

Police said the drug runners later retreated to the neighbouring Myanmar and they left about 100 kg of crystal meth at the clash site, Thai media reports.

Meanwhile, Police in northern Thailand’s Lampang province arrested the driver and seized 172,200 meth pills and about 70 kilos of crystal meth. The drugs were found during a search of his pickup at a drug road checkpoint in Lampang.

Pol Maj Gen Anucha Uamcharoen, said the pickup was loaded with vegetables enclosed in an steel cage. Police discovered a large sack hidden under the vegetables. The sack contained 172,000 meth pills and also 35 packages of crystal meth, weighing about 70kg in total.

Pol Maj Gen Anucha said the driugs had a street value about 100 million baht. The driver allegedly confessed he was transporting the drugs from Chiang Rai to central Thailand.

He was taken to a Lampang police station for further legal action. Consequently he was initially charged with transporting illegal drugs with intent to sell.

Col Chatree Sa-nguantham of the Pha Muang task force said that soldiers were deployed to the Nong Bua reservoir in Bandu at around 10.30pm on Friday following a tip-off. The informant told authorities drugs were going to be smuggled from Mae Sai district to an area near the reservoir.

Soldiers spotted a white Toyota SUC parked near the reservoir, with three men standing near it. Consequently the soldiers asked to conduct a search and found 13 sacks inside.