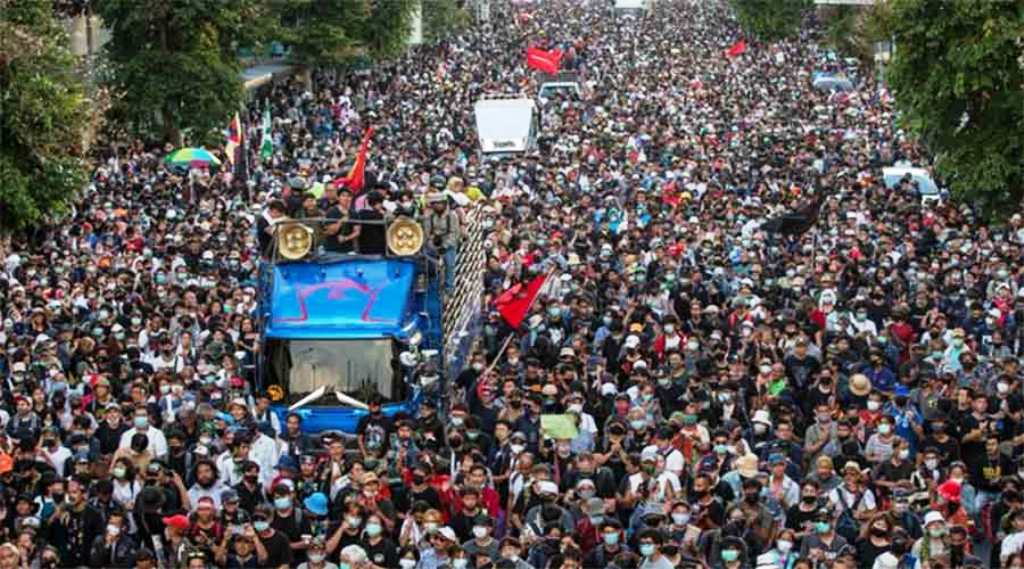 Tens of thousands of anti-government protesters marched on Government House in Bangkok, Thailand on Wednesday, October 14th, 2020 to press their demands for Prime Minister Prayut Chan-o-cha to step down.

The Anti-government protesters settled into their new camp on Phitsanulok Road, outside Thailand’s Government House, on Wednesday night after police gave up trying to stop them. They were briefly halted by police barricades, but when they insisted on moving forward, police finally backed off.

“Down with dictatorship. Long live democracy,” the marchers chanted as they moved off from Democracy Monument. Where they had assembled face to face with thousands of royalist supporters.

The protesters walked from the Democracy Monument to Government House via Nakhon Sawan Road as police blocked them from marching on Ratchadamnoen Nok Avenue, the Bangkok Post reported.

Human rights lawyer Anon Nampha and other protest leaders promised there would be no violence during the rally.

Royalist had gathered along Ratchadamnoen Avenue, waiting for the motorcade of His Majesty the King. He was to go to the Grand Palace in the afternoon for a religious ceremony.

The protesters were blocked by four police buses at the end of Nakhon Sawan Road. In front of the Bank of Agriculture and Agricultural Cooperatives office. The demonstrators in the front line started trying to push one of the buses out of the way, so they could continue. Their leaders told them to stop and to show restraint.

They then sat down along Nakhon Sawan Road waiting for the next move from their leaders. Police later allowed them to move forward, and then set up a new barrier on Phitsanulok Road, closer to Thailand’s Government House.

The protesters insisted on moving forward and police eventually decided to let them go, by moving backwards. A march leader said they planned to camp out on Phitsanulok Road, outside Government House.

The protest was organised by the “Khana Ratsadorn” (the People’s Group). Formerly known as the Free People movement. Because the protesters moved off from Ratchadamneon Avenue, police cleared away traffic. Royalists had a chance to glimpse the royal motorcade of HM the King. His motorcade went from Ambara Villa in Dusit Palace to the Grand Palace for a religious function.

City Hall workers also restored plants at the Democracy Monument in Bangkok, Thailand. They had been moved by the protesters during their gathering there before the march. The demonstration is the latest in three months of action that have put the greatest pressure in years on the establishment, long dominated by the army and the palace.

Pro-Democracy Demonstrators Arrested Ahead of Rally in Bangkok