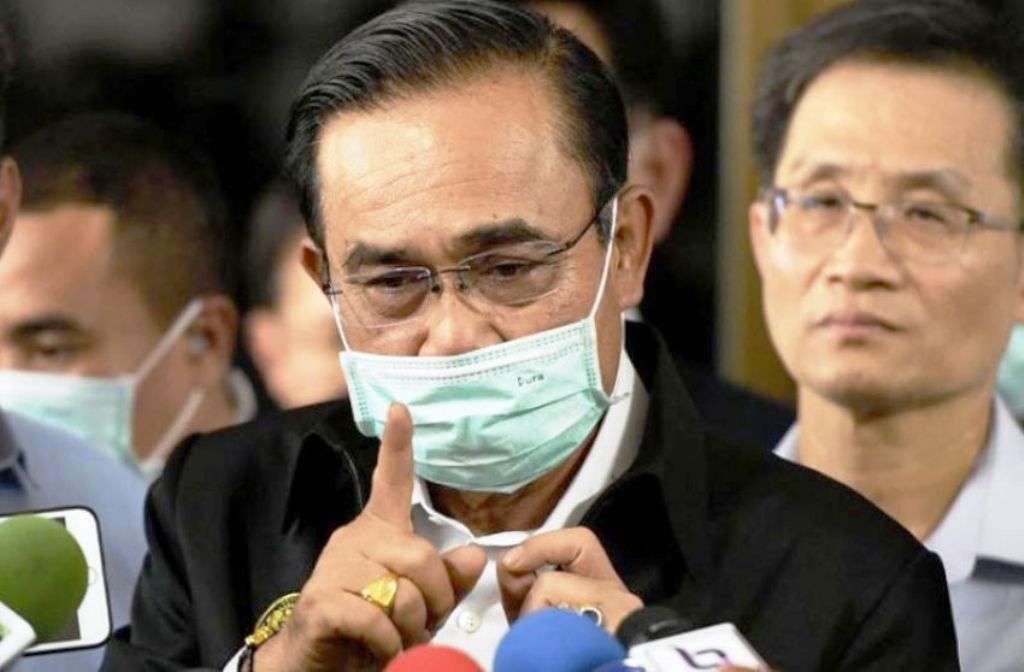 Thailand’s Prime Minister on Tuesday urged people to stay at home over the New Year holidays in light of the recent Covid-19 upsurge. The number of new covid-19 cases continues to rise in several provinces, including Bangkok. Gen Prayut Chan-o-cha said people should only travel if absolutely necessary over New Years.

“We may have to celebrate New Year at home this year and with a limited number of people,” he said on his official Facebook page “Prayut Chan-o-cha”.

After Tuesday’s cabinet meeting, Gen Prayut did not directly respond to media questions as he usually does but instead posted a video clip he had recorded at Government House. It’s now available on its website.

The PM urged people to neither panic nor be too complacent but said unnecessary travel and visiting crowded places should be avoided.

He also stressed that people should heed the health authorities’ advice on Covid-19 preventative measures and monitor updates posted by the Centre for Covid-19 Situation Administration (CCSA).

While acknowledging that interprovincial travel has not been prohibited the PM pointed out that each province has its own specific Covid-19 control protocols, which may include strict screening measures which could be frustrating for visitors.

He also urged everyone to scan the Thai Chana QR Code to check in every time they visit a public place, a measure developed by the government to track those suspected of having come into contact with confirmed Covid-19 cases.

On the topic uppermost in people’s minds, Gen Prayut would neither confirm nor dismiss the possibility of the entire country needing a new nationwide Covid-19 lockdown after the upcoming New Years holidays.

He said that decision would depend largely on how the situation develops but said he personally thought it unlikely that it would become so severe that a national lockdown would be needed again.

CCSA spokesman Taweesilp Visanuyothin spoke of the different Covid-19 control measures around the country and said they depended upon the severity of the situation in each area. In Samut Sakhon, Thailand for instance, a curfew has already been imposed, he said, adding that as of Tuesday 45 provinces had recorded new Covid-19 cases.

New Year festivities have been banned in the highest at-risk provinces of Samut Sakhon and Rayong. A committee overseeing medical emergency operations on Tuesday warned people not to travel this weekend and instead celebrate at home.

Kiatiphum Wongrajit, permanent secretary of Thailand’s Public Health who chaired the meeting, said the four-hour meeting had decided that no New Year gatherings could be held in Samut Sakhon and Rayong.

Events could be organised in lower-risk areas but only on a small scale. Events with more than 100 participants must get prior approval from their local authority.

Dr Taweesilp said a further assessment of people’s compliance with containment measures would be carried out. The rules could be relaxed if compliance is high or tightened if advice was not heeded.

Thailand’s Deputy Prime Minister Wissanu Krea-ngam said the next assessment was likely be conducted on Jan 3-4.

The number of new confirmed Covid-19 cases, meanwhile, continued rising on Tuesday, with Bangkok becoming another province where the cumulative number of infections had passed 100.

In Rayong,Thailand the number of new infections rose to 148, with 56 new cases recorded in one day, prompting maximum control measures to be imposed on five out of all seven districts: Muang, Ban Chang, Klaeng, Ban Khai and Nikhom Phatthana.

Most entertainment venues in those districts have been shut and alcohol sales prohibited, with only supermarkets and takeaway food stalls allowed to stay open, said an informed source.

Matthayom Taksin School in Muang district is now shut indefinitely after a female student caught Covid-19 from her parents — 150 people, including 30 teachers, must now be tested to see if they have the virus.