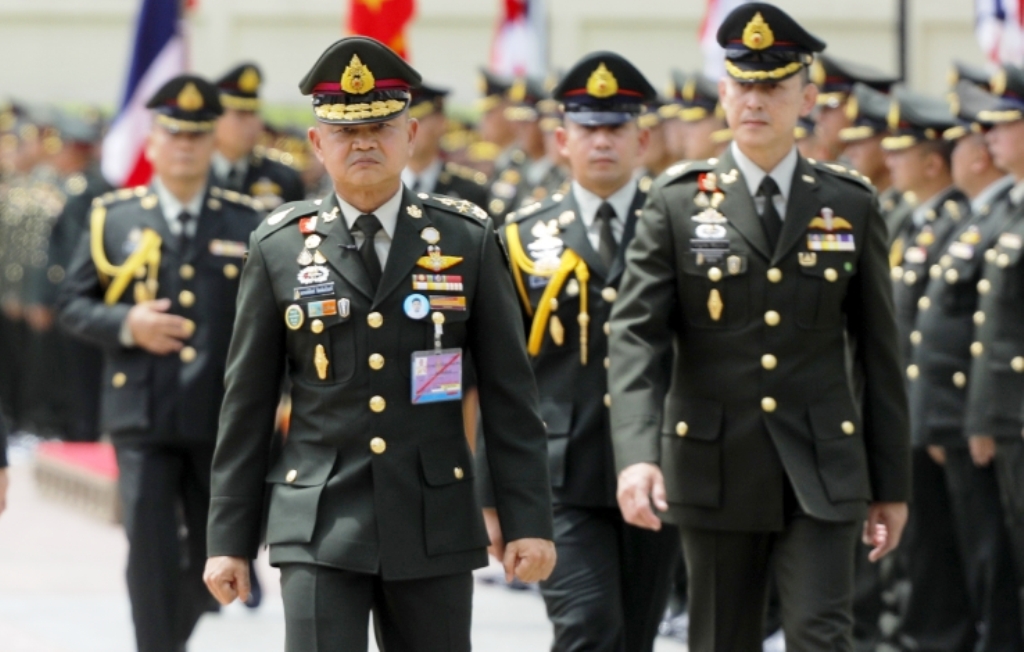 On the Anniversary of the 1976 student massacre Thailand’s new army chief has warned anti-government students protesters. Telling Students protesters to reform themselves first before telling other people what to do.

He was referring to the anti-government protesters whose demands include calls for changes to the Monarchy.

“They should look at themselves first to see whether they have done everything right before telling others what to do,” the new army chief said.

Gen Narongphan Jitkaewtae also warned all parties involved not to create conditions that would create severe conflict. Above all to ensure the chances of another military coup are zero.

Gen Narongphan, who took the top army position last Thursday. He  held his first press briefing on Tuesday after a meeting of army unit commanders at the Royal Thai Army headquarters.

His comments come on the anniversary of the 1976 student massacre at Thammasat University in Bangkok. Also a week ahead of anti-government demonstrations scheduled for Oct 14th. They are to be held at the Victory Monument in Bangkok.

Protecting The Nation, Monarchy and People

Oct 14th also marks the 47th anniversary of the 1973 student-led uprising. The student uprising led to the downfall of the military government of Thanom Kittikachorn.

Asked about the planned protest that may risk offending the monarchy, Gen Narongphan said that everyone has freedom. However their freedom of expression must be in line with the law. Laws Thailand’s Military junta implemented after the 2014 military coup.

“The use of freedom must not violate others’ rights. You must also take responsibility for your actions if you break the law,” Gen Narongphan said.

Commenting on the army’s role under his command, Gen Narongphan said four things in his view had to be protected. The nation, religion, the King and above all the people. “I will do whatever it takes to ensure that security,” he added.

Asked whether he could guarantee there would be no coup he declined to reply directly. “Every army chief has been asked this question. They invariably say the chance are zero on condition! That no one causes a conflict that leads to violence and unrest,” he said.

When the question was repeated, he said: “There is no chance. I don’t think that there is such a situation in Thailand. Because Thailand is now at its best. It’s evident that Thailand has the most freedom along with plentiful resources which guarantees happy lives.”

The army chief also said political problems must be addressed by political solutions. Furthermore he is a government official who has to follow the policies of the government.  He said whatever he does will comply with the creed of the army.

Meanwhile, Arnon Nampa, co-leader of the United Front of Thammasat and Demonstration (UFTD) and the Free People group, said on Tuesday that the anti-government rally planned for Oct 14 will escalate to pressure Prime Minister Prayut Chan-o-cha to resign. Also for a new constitution to be drawn up.

He also reiterated the group’s calls for the monarchy to be reformed.

“We have tried to make our voice heard, but it has fallen on deaf ears. But on Oct 14, the protest will escalate. Demonstrators from the Free Student group and the UFTD will also attend the rally,” Mr Arnon said.

Mr Arnon said that whether the protest will drag on depends on the turnout of demonstrators at the rally.

“If a million people show up, things will end in one day. But if there are hundreds of thousands of them, we may have to wait for those from the provinces to join. Whether it will drag on depends on the situation on that day,” Mr Arnon said.

Pol Maj Gen Somprasong Yenthuam, deputy chief of the Metropolitan Police Bureau,told the Bangkok Post its still unknown whether the protesters will proceed to other locations after the anti-government rally.

Gen Somprasong said the protest leaders in Bangkok have not yet asked authorities for permission to hold the rally. He also that the Royal Thai police have been trying to contact them.